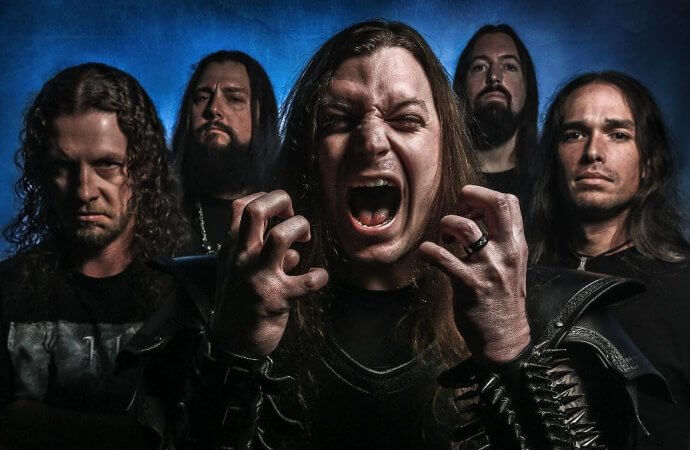 Logan Mader-produced new album Path To Immortality due out April 24...

With the April 24 release of their M-Theory Audio debut Path To Immortality fast approaching, the Southern California-based melodic death metal quintet Voices Of Ruin have unveiled a music video for their powerful new song Carved Out – watch it in full below!

Says vocalist David Barrett, “This song is one hell of a banger that’s sure to get your blood moving! With its vicious guitar riffs, infectious chorus and a pummelling rhythm, this tune is a crushing death metal anthem that you’ll want to put on repeat! Matt Zane really kicked our asses and pushed us to unleash one of our most energetic performances yet. His attention to detail, as well as his experience behind the camera, really motivated the band to create this dynamic video that we think is one-of-a-kind. The song has an intense lyrical theme, as it tells the story of a deranged stalker who is enraged by his failed life and grotesque image. He sees others who are attractive and living their ‘perfect’ lives, and this fuels his rage. He hunts them down and carves out their eyes, leaving them trapped between life and afterlife. Crank the fucking volume up and rage to Carved Out!”

Voices Of Ruin – who describe their sound as an epically-crafted blend of classic heavy metal and modern death metal that also pays homage to the traditional Scandinavian melodic death metal sound – have performed extensively in support of their two self-released albums, 2010’s Into Oblivion and 2015’s Born From The Dark. In addition to winning the U.S. Wacken Metal Battle in 2018 – when they bested dozens of unsigned groups to earn the chance to perform at the world’s largest annual heavy metal festival – the group has toured Europe with Internal Bleeding and Sacrificial Slaughter; supported Vader across North America on the 2017 Strike Of The Empire tour; played in Japan alongside Vader and Hate; and performed extensively in Southern California alongside a number of notable acts, including Morbid Angel, Trivium, Devildriver, Dark Tranquillity, Amorphis, Cattle Decapitation, Dying Fetus and Origin.