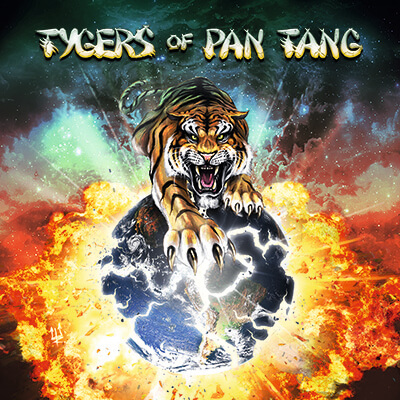 The thing that perhaps divided Tygers of Pan Tang from their NWoBHM peers back in the day was their open hearted embracement of melody. Even before Def Leppard bust the game wide open – far more successfully, it has to be admitted – with their game-changing mix of muscle and tunefulness, ToPT realised it was possible to throw together the heaviest of riffs, the biggest of drums, the bassiest of basses with tunes you could actually whistle on your way to work/school/the dole office and not be considered ‘weak’ or ‘poserish’; to this day I’m still baffled as to how the likes of Paris by Air and Rendezvous weren’t massive hits worldwide.

Thankfully the band continues this trait in the modern day (though only guitarist Robb Weir survives from the ‘halcyon’ days), meaning that their self-titled new album – their first in four years – carries that same invigorating mix of styles and moods made something of a signature by the band all those years ago.

Sometimes they even do it one song; Never Give In mixes a none-more-black NWoBHM riff to a simply gorgeous chorus with devastating effect, whilst leadoff single Only the Brave follows the same direction with slightly less impact but no less enjoyment for those listening.

Of course, you can only do this sort of trickery if all your personnel are firing on all cylinders, and I’m pleased to report that that’s the case with the Tygers. In particular vocalist Jacopo Meille gives a career-defining performance, handling the heavy metal like Never Give In with aplomb yet also displaying his softer style when needed. His performance on the slinky power ballad The Reason Why can only be accurately summed up by one word – Coverdaleesque.

The plodding hair metal tribute Glad Rags isn’t so successful – Asking for Poison and getting Little Angels isn’t ever going to satisfy anybody – but the track isn’t actually that offensive in the grand scheme of things. Do It Again is melodic metal delivered with power and panache, scintillating riffage backing another commanding vocal, and whilst the cover of Kiki Dee’s I Got the Music In Me is intriguing, if not completely successful it does at least again highlight another, different facet of Meille’s incredibly versatile larynx. Nice talk box guitar too!

Bands like Tygers of Pan Tang are on a hiding to nothing releasing records in 2016; Stray too far from the old path and you’re guilty of trying too hard to be relevant, release something that sounds like The Cage Part 2 and you lack the guts to do anything innovative, preferring to play it safe and take the cash. By pleasing themselves with ToPT and showing just what they can do over a variety of styles the band have avoided any such barbs and delivered an incredibly listenable album into the bargain. Not easy to pull off, that – so props to all concerned.