Tokyo Blade’s Andy Boulton: “We Owe The Fans Everything”… 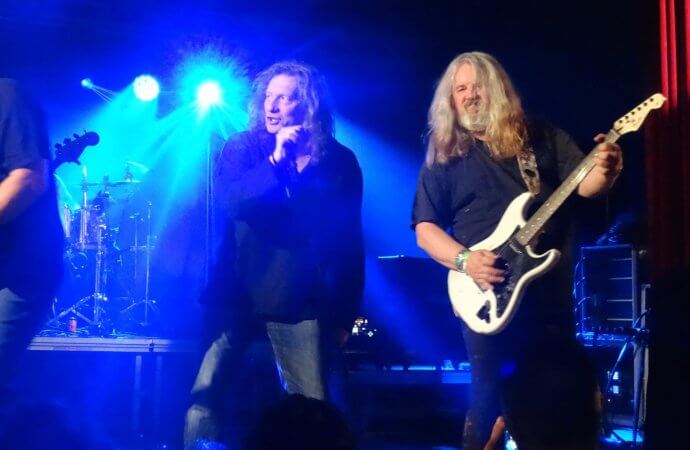 Veteran Brit metallers Tokyo Blade have a new album out this week, so Scott Adams talked to guitarist Andy Boulton to find out more...

Hello Mr Boulton! Thanks for taking the time out to chat about the new Tokyo Blade album, Dark Revolution. The album is out this week – it’ll be a while before you get a handle on the reaction of the fans, but have you been pleased with the reviews you’ve seen? “Hi Scott – yes we’ve been very pleased with the reviews we’ve seen so far. Of course we are hoping that the fans are going to love it too, they are the ones that buy it and we owe them everything as a band”.

Not withstanding all the extra problems we are encountering at the moment, how difficult is it to keep a band like Tokyo Blade running day-to-day? “Well it’s always been incredibly difficult just to keep Tokyo Blade running. I’m not gonna sit here and cry about it but we’ve had more than our share of bad luck and unfortunately it all comes down to money and support at the end of the day, which is something that has been sadly lacking throughout Tokyo Blade‘s long history. With (new label) Dissonance so far we’ve had great support and PR so we’re very relieved to be with a very professional company at last”.

It must be a relief! Once you decided to get a new album out, how long did the process take? Was this album written from scratch or were you working with material you already had in the vault? “I guess it took about six months all in all; Alan (Marsh, vocals) and I already had most of it written so we touched up a few bits here and there and we were ready to go. As the album was recorded in my home studio it was a fairly easy process and it enabled us to take time and make sure we were happy with the sound”.

How important was it for you to have a ‘classic’ lineup for the record? Do you think fans feel a little short changed when one of their favourite bands appear with only one or two members? “Well, the last album Unbroken and this album both feature the Tokyo Blade classic lineup which I do think is quite unique and I think the fans really appreciate that. I do feel that the fans appreciate the original lineups more – I mean, there are a lot of bands who go out under their original name with only one original member in the band”.

Or none at all! You’ve been doing this a while now – do you approach writing and recording much differently to the time of that first Tokyo Blade album? “I think the approach is basically the same; I come up with riffs and chords and basically put the song together, hand it to Alan who takes it away and spends a lot of time crafting the melodies and lyrics and always does such a great job of that. He always manages to strike a balance between heavy and tuneful and comes up with great choruses. We both have our strengths and we both work well together and always have. Of course having your own studio makes life so much easier when it comes to songwriting as well as recording so it’s a lot easier than the early days when I used to play a few riffs onto a knackered cassette player that Alan had to hold the mains lead in a certain position just to get it to work”. (laughs)

Give us your own little ‘review’ of the album – where would you say it sits in the Tokyo Blade catalogue in terms of songs and sound? “I always find it difficult to be objective regarding one’s own work and often end up being over critical. One of my personality quirks is losing interest rapidly over something I’ve done and always wanting to move forward to the next thing. But to sum it up in a few short words I would say it has more aggression and power than, say, Unbroken whilst retaining the hooks and memorable choruses Alan is so great at doing”.

Did you have much touring lined up before the pandemic? How will you go about promoting the album when things get back towards normal? “Not much, we did have a major festival to play in Spain the Leyandes del Rock festival which we were really looking forward to, but I would imagine that all festivals this year will be off which is a disappointment to us and of course the fans. At the end of the day these are minor interruptions and one needs to look at the bigger picture. My heart goes out to the real sufferers of this pandemic, the people that have lost close friends and family are the ones really suffering. It’s very sad indeed”.

Anything else you’d like to say to our readers about the new record? “Obviously we all hope that you enjoy the new album, our many fans are loyal and have stayed with us through thick and thin and in our career there has been plenty of “thin”… You guys are the reason we keep doing what we do, look after each other, stay safe and let’s all beat the shit out of this thing. Godbless y’all”

Go HERE for more info on Andy, HERE for more on Tokyo Blade and HERE to read Gavin Strickmann‘s review of Dark Revolution, which is out on May 15th through Dissonance Productions.