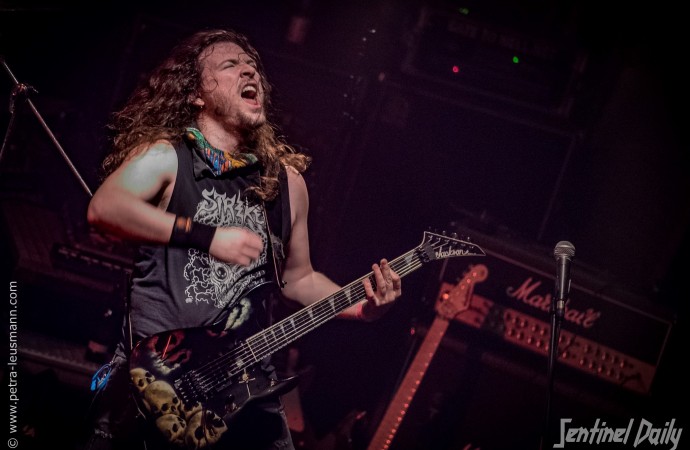 Here we are, the pinnacle of our countdown of the 100 best metal and hard rock albums of the year... who will be number one?

‘Isn’t it time Testament were elevated to Big Four status on a permanent basis?… whether you’re a die hard member of Testament‘s legions or just a curious interloper, there’s sure as hell going to be plenty here to spread a smile across your face. This is a great album’. – Michael Stronge, 11/10/16

Read Michael’s full appraisal of Brotherhood of the Snake HERE

‘Captivating stuff… Sleep of Monsters have stumbled on a near-perfect formula here, and practice their art in irresistible fashion – If you have an inkling for the dark arts, for those things hidden to the mainstream eye, there’s a fair chance you’ll be utterly captivated by the Poison Garden…’ – Scott Adams, 10/05/16

‘It seems like all the songs have been building up to the albums finale, the title track, and it is well worth the wait. This amazing piece, almost 7 minutes of pure listening pleasure, weaves its way from instrumental magnificence and tempo changes to heavy driving riffs. The epic nature of the song is reminiscent of the magical track that is Blackbird… As the track ends abruptly I find myself putting it on for just one more listen’. – Paul Kerr, 20/09/16

‘Splendid exposition of the progressive arts by a band that’s getting better and better… Let’s hope that Bronze becomes the gold standard by which this bands future works are judged’. – Scott Adams, 17/10/16

How does he do it? How does Tobias Sammet manage to keep up such a high quality output of grandiose power metal year in year out? It’s probably best not to question things too deeply and just enjoy the fact that he does. This year we got a new Avantasia album, Ghostlights, that signally failed to break that golden run, being another dumbfounding collection of superb songs and stirring performances, courtesy of Sammet and his usual cast of megastar willing associates. Don’t ever change, Tobi! – Ferry Templeton

‘All in all then, a near faultless release from a band who’ve been threatening to be this good for some while; In fact, I’d go so far as to say this is a must-buy release if you are a fan of melody-saturated power metal’. – Scott Adams, 29/11/16

‘Seriously there is so much good music on offer here it would be an absolute travesty if you chose to ignore Armageddon simply because you don’t understand the words. In my world metal is the universal language, and Equilibrium speak it very well’. – Ferry Templeton, 24/08/16

‘Thirsty, if you didn’t know already, is the latest musical vehicle of former Quireboy Guy Bailey… Albatross, corralled masterfully by Rolling Stones cohort Chris Kimsey is a delight for the ears’. – Scott Adams, 26/10/16

11. Solitude – Reach for the Sky (Test Your Metal Records)

‘Like wrapping yourself in a favourite old power metal blanket… Overall, this is a very solid album’. – Paul Kerr, 09/05/16

‘Astounding sounds that’ll test your neck muscles to their very limits… This is as near perfect as it’s possible to get in the world of heavy metal in 2016’. – Scott Adams, 10/03/16

Read Scott’s eulogy to Stand in the Fire HERE

8. Evergrey – The Storm Within (Century Media)

I was unsure of TSW on first contact – so much so that I turned down the chance to review it – but time very quickly showed me the error of my ways.  Quite simply The Storm Within is the sound of an artist – Tom Englund – in full control of his destiny and forging ahead all guns blazing. Crushing metal, heart-rending ballad, radio-friendly unit shifters – the man has mastered them all, and shows anyone who cares to listen on this album. He’s peerless, quite frankly, and this is a masterpiece. – Ferry Templeton

‘Very impressive indeed… My colleague here at Sentinel Daily, Ferry Templeton is often telling me how good this new wave of French heavy metal is, and on this evidence I’d have to agree with him. Allez le NWoFHM!’ – Gavin Strickmann, 26/09/16

‘Progressive music at it’s very apogee… Swedes Wolverine have done it again. By which I mean they’ve released another stunning, stunning album packed full with the sort of music that will spark every emotion in you into life – maybe even some you didn’t know you were harbouring – in the process completely reaffirming all the reasons why you loved this band in the first place. And if this album will be your first brush with Wolverine – welcome, you’re surely going to enjoy the ride…’ – Ferry Templeton, 29/06/16

Read the rest of Ferry’s review of Machina Viva HERE

‘Wreathed in tragedy yet shot through with class… a fine epitaph to the life of a man, Jimmy Bain, who gave his life to heavy rock over five decades in the game’. – Scott Adams, 16/03/16

‘I have seen the future of thrash metal… Absolutely tremendous and absolutely recommended if classy, and classic, thrash and metal is something that sets your pulse racing’. – Scott Adams, 07/07/16

‘A breathtaking return to form… if Brian Tatler has got the fire in his belly again there’s no reason why Diamond Head can’t have a successful ‘second’ career ahead of them for many years to come with comparative youngster Rasmus Bom Anderson at the vocal helm. And that’s a very fine prospect indeed’. – Scott Adams, 31/03/16

‘Mike Howe returns to the fold with tremendous results… this is easily the best record to come out under the Metal Church imprint since 1991’s The Human Factor’. – Scott Adams, 25/02/16

‘The return of a true titan of hard rock doesn’t disappoint… The Prelude Implicit is a grand statement, perhaps the grandest Kansas has made in the last thirty five years. It is the sound of a band comfortable with all the facets of it’s past, yet excited about the new possibilities of the future; But above all, it is a triumph’. – Scott Adams, 13/09/16

Read Scott’s full review of our album of the year, The Prelude Implicit, and listen to a couple of tracks from the record HERE