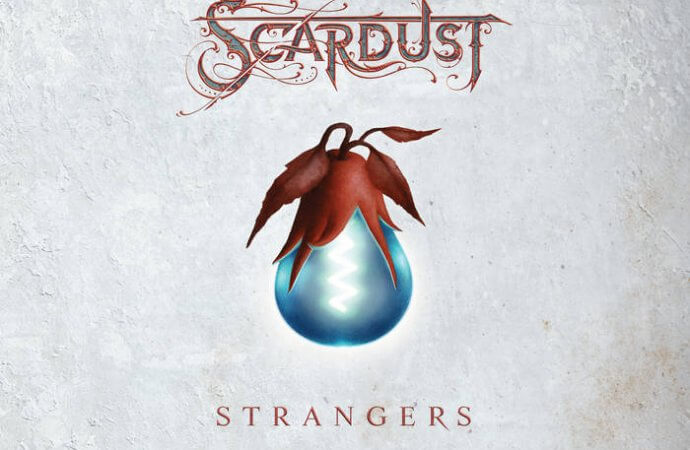 But if you’re prepared to dig in for the long haul, and give every one of the eleven tracks on offer your full and undivided attention, over the course of some days and weeks, there’s a fair chance you’ll come to the opinion that is one of the most magnificent albums released in it’s field in years.

Less than four minutes into opening track, Overture For The Estranged, and well before incendiary vocalist Noa Gruman has even entered the fray, the band have already proved their mastery of modern classical music, prog metal a la Dream Theatre, pomp rock a la Kansas – you name it, they play it. Frighteningly well. Like I say, it’s exhausting stuff. But utterly, utterly exhilarating at the same time. And then of course there’s Gruman. The centrepiece of the Scardust sound. Her vocal on first ‘proper’ track Break The Ice, sets out the stall, sets the bar high, immediately alerting you to the presence of greatness; but from that moment on, whatever barriers the vocalist sets herself are summarily smashed, reset and then smashed again with breath taking aplomb and assurance. Throughout the album she gives a masterclass in heavy metal vocalisation, mixing sheer power with astonishing artistry in a bravura performance that’ll have the established leaders in her chosen profession twitching uncomfortably and wondering how they can live with this level of competition.

On Tantibus II she leads massed choral backing – one voice against many – yet still cuts through. And it’s not just other voices. There’s an awful lot else going on in these tracks for Gruman to contend with, whether it be the ultra fluid lines of bassist Yenai Avnet (in his own way as accomplished in his field as Gruman is in hers), the punishing guitar work of Yadin Moyal (who melds the rhythm guitar punch of Kansas’ Rich Williams to the flying-fingered lead prowess of John Petrucci in jaw-dropping style), the relentless percussive battery of Yoav Weinberg (imagine Yes skinsman Bill Bruford engaged in a constant drum war with Iggor Cavalera) or the florid keyboard flourishes of Itai Portugaly; together the quintet whip up a beautiful cacophony of orchestrated madness where somehow, against all the odds, melody still comes out on top. At all times the listener is left marvelling at just how astonishingly well the band pull off the supreme trick of melding kitchen sink musicianship and pop-sensible song writing smarts.

If there’s one negative to be identified it’s that some (not all) of the choral backing occasionally comes off as a bit ‘high school musical’ in comparison to the virtuoso shellacking being given to the ears from every other quarter, but it’s never in earshot long enough to genuinely affect your enjoyment of the record; better still to concentrate on the sheer brilliance of tracks like Concrete Cages or Gone, and to reflect on just how far this remarkable group of musicians might be able to take Scardust in the future…