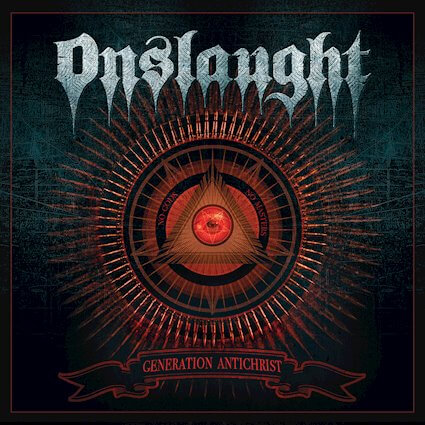 I remember seeing Bristolian bruisers Onslaught back in the heady, cider fuelled days of the mid eighties just after then vocalist Sy Keeler had taken the vocal helm. As a young punk I wasn’t that enamoured with his heavy metal screaming, which took the band in my fevered brain at least out of the safe ideological waters of crossover/street punk and firmly into the stygian world of Kerrang-approved thrash metal.

I grew to love the band in my own cranky way after The Force – all part of the ‘growing up process, I guess – although their Metallica dalliance In Search of Sanity was a big stumbling block when it came out and still is, and so now we find the band, some thirty-odd years after many thought their glory days already gone, releasing their seventh full-length album, Generation Antichrist.

I’m not going to waste time beating around the bush. Sy Keeler is gone, I know not where, to be replaced by former Bull-Riff Stampede man David Garnett, with the result being a slight shift in the band’s sound, to my ears at least re-aligning them back a bit closer in line with the old punk days of yore. And I like it. Actually no – I bloody love it!

Sure, the music is still for the most part beefy nu-thrash that owes a big debt to Exodus and Testament (and, of course, Slayer– the start of the excellent All Seeing Eye and Empires Fall are moments of pure Raining Blood-vintage skullfuckery, right down to the superbly unhinged soloing of Wayne Dorman and inhuman drum battery courtesy of James Perry). But on standout cut Addicted To The Smell of Death, Garnett’s gruffer, more ‘street’ delivery, aligned with the breakneck riffage and excellent gang vocals sees the band sounding more ‘punk’ than they have done in aeons. Think a heady mix of Broken Bones and the Exploited, fed on a strict diet of metallised ‘protein foods’ and you’re getting close to just how titanic this all sounds to an old punk with fifty year old ears and a prediliction for studded, sleeveless leather jackets…

BREAK OUT THE FUCKING STRONGBOW!!!

Guitarist/guiding light Nige Rockett is in absolute career best riffing fettle on some of the tracks here, his rhythm work elevating some tracks into the realm of the purely savage. This is frighteningly good stuff in places, thirty eight minutes of absolute aural carnage that deserves a place in every self-respecting record collection in 2020.