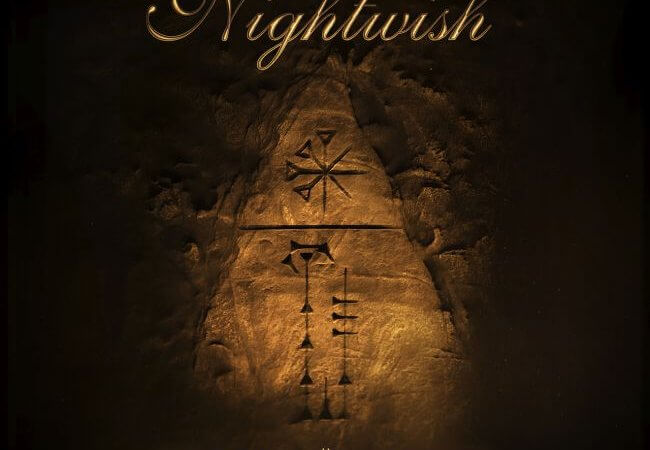 Finnish symphonic titans Nightwish are back with their first all-new music in five years; that last effort, Endless Forms Most Beautiful, the first with fan-favourite vocalist Floor Jansen, has come to be seen as something of a disappointment, largely because of the self-indulgent nature of it’s twenty-five minute closing track The Greatest Show on Earth. Fan discussion sites suggested the band’s chief songwriter Tuomas Holopainen was running out of steam, that too many Nightwish tropes were regurgitated with little or no effort made to conceal the apparent lack of inspiration. Has a five year break rejuvenated the Holopainen creative juice well?

Not entirely – there is still a lot of standard issue chugging going on on the front end of Human Nature; Guitarist Emppu Vuorinen is largely marginalised throughout the record, save for some  nicely savage riffage on Tribal, whilst bassist Marco Hietala also takes a back seat throughout, save for some Cavalera-styled grunting on Tribal and a duet with Jansen on the song that closes the ‘band’ part of the record, Endlessness.

I say the ‘band’ part, because, as on Endless Forms… Holopainen has chosen to give over the second half of the album entirely to a suite of eight movements of neo-classical/soundtrack style music that probably should have been given an album of it’s own in it’s own right. It’s an enormously ambitious piece of work, and when it gets things right, as it does on the bucolic The Green, Holopainen is seen to have created music that will set the senses reeling. His classical impulses clearly outweigh his rock ones these days, a fact which borne out so clearly here leads the casual, non-committed listener to question the need for him to keep recording as Nightwish at all. I certainly hope he does, though clearly a new balance has to be struck and more clearly defined between the two sides of the band.

Anyway the sum of the parts, in my not-so-humble-opinion, is still rather good. An epic album deserves an epic review, and so here are my thoughts on each of the tracks that comprise Human Nature...

Music
A minute and a half of eerie jungle noises mutate into a dramatic, tribal drum-fuelled soundscape which in turn gives way to a bubbling keyboard that makes the listener think of underwater kingdoms… the first massed choir of the album breaks the reverie, and just before the three minute mark the first recognisable swell of symphonic music reminds you just who you are listening to.
Floor Jansen takes centre stage here, accompanied by an understated Holopainen keyboard presence. The band finally get involved and the song blossoms into a fabulous, Abba-tinged anthem. Emppu Vuorinen and Marco Hietala slip into their trademark mid-paced chug, the orchestra and choir rise and fall… you know the score by now. But that doesn’t make it any less exciting…

Noise
Here we go back to the over-the-top syncopated orchestrations of Imaginaerum, with the track in places sounding like that album’s Arabesque instrumental given a little more flesh. A stomping rocker overall, it’ll be a fine addition to the band’s live canon. There’s a great vocal at the end of the song from Floor.

Shoemaker
A quasi-operatic slice of storytelling featuring spoken word interpolations and some majestic operatic singing towards songs end. In fact the end of the song saves the track from the mediocrity of it’s beginning, being as it is pure Wagnerian metal of the highest order…

Harvest
The opening of Harvest sounds like something Peter Gabriel might have done on one of his first four solo albums; However the arrival of some tepid male vocals rather let things down. That said, everything makes sense on the whimsical mid section of the song where Vuorinen, Holopainen and Donockley mesh triumphantly to create a new slice of classic Celtic metal that’ll send the competition scuttling back to their turf huts to start again.

Pan
Continuing the bucolic tone of the album so far Jansen takes back vocal control, again in tandem with Holopainen and a jaunty drum tattoo from the largely underused Kai Hahto. The rest of the band offer a brief but jagged intercession, peace returns. This alternating dynamic continues to the midpoint of the song, which then transmutes into a tour de force of over the top symphonic metal – the sort of music the fans love the most.

How’s The Heart
Again the pipes, but these are short lived as the band pitch whole heartedly into the most straight forward song of the album to date. A sort of semi-power ballad, delivered with a Euro metal band’s ear for catchiness, it doesn’t quite offer up the instrumental bombast you’d hope for, opting instead to keep the Celtic motifs higher up in the mix than the power chords. That said, Jansen’s emphatic vocal performance marks this out as another fan favourite in the making. For fans of the less florid side of Nightwish, the best track on the album..

Procession
Jansen takes centre stage here as the accompaniment takes a step back and allows her space to impress. Which obviously she takes, despite offering a sombre, melancholic delivery that strangely brings Julie Andrews circa The Sound of Music to mind…

Tribal
And it is. Hahto’s most effective drum performance underpins some savage riffage and a vocal performance that sees Jansen seemingly loosening up a little, including a frankly Sepultura-styled hoedown mid song (it’s Tribal, you see)… fans of the heavier end of the Nightwish spectrum will lap this up, and quite rightly so.

Endlessness
Not the longest song on the record, but undoubtedly the album’s ‘epic’. Which you can tell because it’s slathered in an ‘Eastern’ feel á la Kashmir. Marco Hietala and Jansen share the vocals on this over-the-top piece of symphonic majesty, which forms the fulcrum of the album. It swells like a piece of Grieg or Sibelius, building tension and drama before ebbing away to nothing in a wash of fragile choirs and keys. 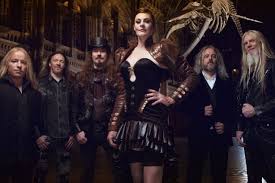 Vista
More spoken word, again harking back to Imaginaerium. Muted strings again take the listener back to the classics (Elgar and Holst both spring to mind), whilst a solo opera voice – Ave Maria, in essence- tugs at the sensibilities as the music does indeed open up a vista in the listener’s mind. Beautiful, moving, accomplished, ambitious. All these things and more. The swelling choirs at the end of the song add religious zeal in a cinematic fashion that recalls the Miklos Rosza soundtrack to the 1959 version of Ben Hur.

The Blue
Continues seemlessly from Vista, more symphonic, less bucolic. The ships bell and seabird noises at the end giving the only clue to the meaning of the title.

The Green
If the blue is the sea, is the green the land? The gently plucked strings do indeed evoke scenes of nymphs and shepherds in the mind, as an Arcadian, sun-drenched otherworld of the imagination stretches out over the four and a bit minutes the piece takes to wend it’s way through the ears.

Moors
From Arcadia to a windswept, tree-bereft desolation, accompanied by Donockley’s pipes and Holopainen’s sentimental keys. It could dip into a sort of sub-Poldark, misty-eyed cliche but manages not to thanks to some dramatic orchestral heft just before the mid point of the piece, wherein the orchestra summons a dark storm from the depths of the woodwind section, threatening to ravage the air of reverie. The pipes prevail, however, with the result being that this might all be just a touch too Clannad for many listeners.

Aurorae
The wonder of the shimmering Northern lights brought to life by shimmering harp and vocal interplay… the second half of the song, however, invokes the spirit of Aaron Copeland. A rodeo in the stars? possibly not, but somehow the motif works, despite the clash of influence.

Quiet As The Snow

The only piece of the second half to fail to spark the imagination, it mere;ly acts as a bridge between more effective sections. Not bad, just bland..

Anthropocene
The first half of the track finds Holopainen excelling himself, creating an intense piece of neoclassicism that will go down as one of the most impressive passages of music he’s ever come up with, the second half, which again looks to Grieg for inspiration doesn’t work quite so well on it’s own terms, despite managing to set up the work’s finale quite nicely.

Ad Astra
Again harks back to Imaginaerium, the spoken word giving way to a jaunty finale section, as a solo voice backed by ethereal choirs battles drums that teeter on the tribal but remain orchestral; here, as in all great finale pieces, the themes of the album of a whole are weaved together to deliver a life affirming climax.

So there you have it. I have to say, for all my reservations, I haven’t enjoyed a Nightwish album as much as Human Nature since 2004’s high water mark Once; there’s much here to get the teeth into, even if the band’s metal content gets less by the day. Recommended, but approach with caution if you’re looking for double-kick fuelled, devil-voiced mayhem…

Human Nature is out now.