Mr Sleazy – All Or Nothing (Volcano Records) 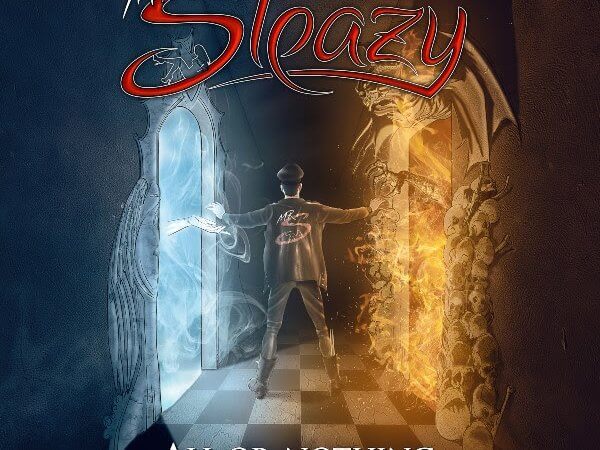 Italian hard rock collective Mr Sleazy whip up quite a storm on their new album All Or Nothing. The nine tracks to be found within it’s grooves offer a little encouragement to any listener born and bred in the eighties who might yearn for a little bit of nostalgic, spandex-clad fun and games, with the added bonus being that, whilst the guyz n’galz in the band never get too serious, there doesn’t seem to be a great deal of Steel Panther-styled ‘parody’ going on either. This is serious fun, people!

Formed around the titular Mr Sleazy himself (drummer Roberto Gambuti), the band certainly know their way around a slamming pop metal toon. Opener Let’s Go is the sort of thing the Scorpions might have thrown together in 1984 (the illusion enhanced by the very ‘Meine-esque’ vocals of singer Christian Demichelis), and if the band don’t quite hit these delerious heights on the album again it’s not for want of trying; Stomping second track Kind of Love ain’t too far away thanks to some nice guitar from Andy Lanza and Mike ‘The Doc’ and some dramatic keyboarding from Spike, whilst the more measured Lonely Days For A Lonely Heart whets the more demanding whistle without surrendering too much in the muscle department. And lovers of a good chorus will take this one to their hearts, mark my words!

Things Aren’t Always What They Seem is a classy ballad – of course this album has one – building up and up towards an anthemic verse that ticks all the power ballad boxes but again stops short of cliche or cheese. Demichelis proves himself a mighty accomplished throat on this one.

The rest of the album is solid, tuneful hard rock that won’t disappoint, but the four tracks I’ve highlighted really are the work of musicians with the sort of talent the likes of me can only dream of. This album is well worth a listen, and comes highly recommended.

All or Nothing releases on July 10th.