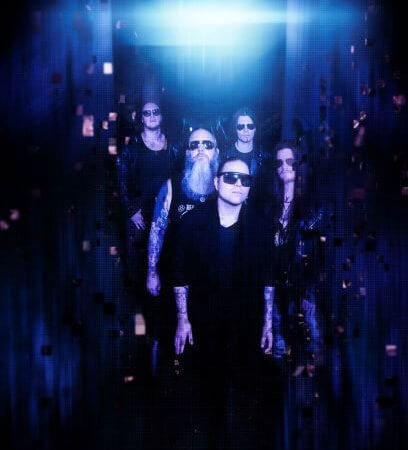 From the dark realms of Finland comes a new name in dark metal… Mercury Circle!

The brand new project from Iconcrash/Swallow The Sun’s Jaani Peuhu, Mercury Circle promise a heady mix of ‘dark metal infused with powerful synth/electro waves and doom’, the first proof of which will be a new EP set for release through the Noble Demon label on August 14th in the shape of The Dawn of Vitriol.

Jaani Peuhu, producer, songwriter and musician was the creator of darkwave electronic band  Iconcrash, who debuted their first album  Nude in 2005, followed by two more albums. In 2015 Jaani set out on his solo project and released his first album, Tear Catcher . Jaani joined Swallow the Sun while producing their (2019) album When A Shadow Is Forced Into The Light, which peaked on the Finnish album charts at number one.

Jaani also topped the album charts with writing and producing for German dark rock band Lord of the Lost‘s 2018 album Thornstar and was nominated for the Finnish grammy award Emma  for Hallatar‘s debut album No Stars Upon The Bridge (2018), which he also produced and mixed, along with playing bass live in the band.

Jaani has also worked with various multiplatinum-selling Finnish pop artists and metal acts like Before The Dawn, Diamond Black, Thunderstone and To/Die/For.

Although Peuhu wanted to focus on his career as a producer, touring with Hallatar and Swallow the Sun made him want to tour with his own music again. He had the unique idea to create the genre of “new doom”. From that, Mercury Circle was born. This is a new direction of dark metal infused with powerful synth/electro waves and doom. He’s finally returning to vocals to bring you something purely enigmatic.

Comments Peuhu: “After I returned from touring with Hallatar I started to write new music. My plan was not to write anything too heavy. For some reason the songs I wrote were closer to doom metal than dark rock. I followed my heart and wrote an album without any preconceptions about genres, planning or second guessing what I was doing. I felt like I needed to get these songs out of my system. When the songs were written and the demos done I started to think what I was going to do with them and whether I should form a band to perform them. I made a list of musicians I wanted to work with. I contacted them, played the demos and after asking if they were interested to join, they all said yes. We are very much looking forward to bringing you new doom.”

Guitars: “Juppe (Sutela) and I played together in Mary-Ann, the band that soon became To/Die/For. He is one of the best guitar players I know and his stage presence is amazing. He is a great rock guitarist. I have always been a huge fan of The Cult, so from Juppe I wanted this real, old school rock attitude on stage. I have known Jussi (Hämäläinen) from his bands Hanging Garden and The Chant. Jussi is a very talented musician and also gifted with production skills so, after we had talked about this new adventure of mine, I knew right away I wanted him onboard. He has been my right hand with recordings and production”.

Bass: “Ande (Kiiski) plays bass in MC because he is absolutely amazing onstage. I have experienced his charisma live with Sleep Of Monsters, a band that dwells in the same kind of deep and dark waters like MC and also with the legendary Rytmihäiriö. He is also a close friend of mine and a person who makes people around him feel good. That is an important quality when you think about line-ups”.

Drums: “Juuso (Raatikainen) is a beast. We both play in Swallow the Sun so I have toured with him a lot and also been in the studio with him on three different projects already. I started as a drummer, too, so I am very demanding when it comes to drums. He is a world class drummer and a very versatile and inspiring guy to work with. I can’t wait to start the album recordings with him and see where he will take the songs with his twisted drumming”.