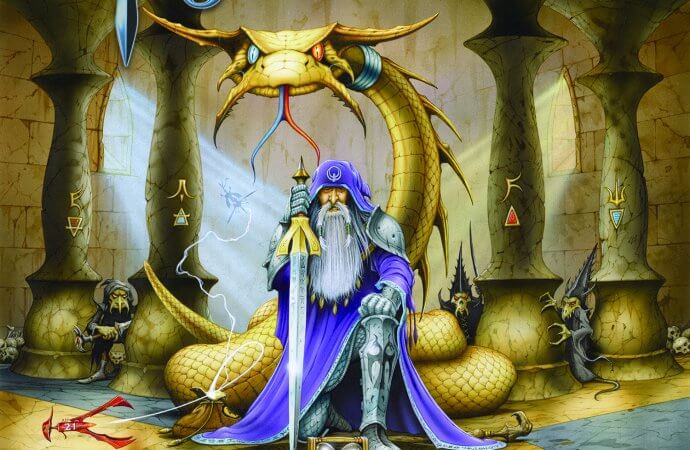 A great band doing what they do best - for the first time in a while...

Wow… just wow! I bought my first Magnum album, 1982’s Chase the Dragon, for 20 pence in a fire-damaged stock shop whilst on holiday in Poole, in Dorset, and I’ve considered myself an avid fan ever since. In fact, I’ve seen Magnum ‘as a punter’ more times than any other band on the face of our ever-more benighted planet. But over the past few years – ever since 2007’s Princess Alice and the Broken Arrow, actually, I’ve become ever more dispirited by the band’s recorded output. Formerly an act on whom you could rely to provide albums packed from front-to-back with reliably excellent melodic hard rock, the band were seemingly withering on the vine, weakly recalling glories past whilst drowning in a sea of ever more tepid ‘product’… Until Now.

I don’t know how it happened – the influx of new blood over the past couple of years maybe? – but somehow, for The Serpent Rings, Magnum’s twenty first studio album, the band has regained it’s seemingly lost inspiration and delivered it’s finest album since 1988’s Wings of Heaven.

The album kicks off in scorching style with the cheekily self-referential Where Are You Eden (which draws a line right back to perhaps the first classic track the band ever penned, Kingdom of Madness) and backs that solid start up with the excellent You Can’t Run Faster Than A Bullet, which sees the band veering closer to 1990’s Goodnight LA for inspiration; However the band shy from just ripping themselves off, preferring instead to simply evoke past times and pomp. Madman Or Messiah doesn’t even do that, instead sounding full of fire and vigour, almost as if the band have managed to re-imagine themselves whilst still retaining every single trademark that made us love them so much in the first place. It’s a heady state of affairs to find yourself in as a long-term listener, let me tell you, as Tony Clarkin comes up with some of his most vicious riffage in years, backed by newish drummer Lee Morris who unleashes rolling thunder behind the kit in the manner of the great and much missed Mickey Barker.

The Archway of Tears is mid-eighties Magnum in excelsis, ageless throatsmith Bob Catley giving a bravura performance that’ll have you grinning like a loon as the hairs on the back of your neck rise to pay respect to surely Britain’s most underrated yet enduring hard rock vocalist. If, like me, you really didn’t believe this band could sound like this any more, then The Archway of Tears is worth the price of admission on it’s own. If you aren’t off your sofa, punching the air whilst your strides slip haplessly to ankle level as you celebrate Tony Clarkin’s inimitable solo mid song, then you surely ain’t as big a fan of Magnum as I took you to be…

Not Forgiven is continues the fine work, motoring along courtesy of a pulsating bassline from new recruit Denis Ward – and what an asset he would appear to be to the band, adding backing vocals and a producers ear to proceedings that surely has some sort of key part to play in this nascent renaissance for the band – with the superb piano/vocal interplay midsong surprisingly sounding like a Britrock version of American pomp metallers Savatage. Next up is the title track, a slow-burning epic in the classic tradition of Don’t Wake The Lion; Clarkin and Catley ratchet up the drama slowly but surely, the midsong symphonic section paving the way for the grandiose closing section, which is again crowned by a superbly evocative solo from Clarkin, who’s lead work throughout is in career-best form.

Catley takes centre stage on The Last One On Earth, revelling in the slightly sparser instrumentation to deliver a restrained yet commanding performance. The band take a valuable step back from the edge here, affording the listener a little time to regroup and make sense of the pomp overload of the album’s first half; however all cylinders are involved again on next track House Of Kings, a strident rocker that again goes back to the band’s earliest days with it’s use of blaring horns and a slinky shuffle beat. And another superb Clarkin solo.

Next up is The Great Unknown; Magnum have always been masters of the epic ballad, and this is the latest addition to a pantheon that over the years has been the equal in its field of any band, anywhere. The diminuendo at the song’s midpoint is an absolute spinetingler, leaving you suspecting that Bob Catley’s prolonged exposure to Avantasia mainman Tobias Sammett has rubbed off a little stardust, which, allied with Tony Clarkin’s absolute mastery of this style of song makes for the absolute apogee in pompous AOR overload. Which in Sentinel Daily-speak means ‘a bloody great song’.

Penultimate track Man is a grinding slice of metal Magnum-style, leavened by yet another multi-layered tour de force come chorus time, whilst closing track Crimson On The White Sand again goes back to the classic Magnum of tracks like How Far Jerusalem and On A Storytellers Night, Catley weaving his otherworldly tales whilst Clarkin and co build an ever swelling backdrop of both pomp and circumstance, the ebb and flow of the music building in intensity as Catley’s ever-more impassioned delivery reaches a glorious crescendo, which in turn sets up yet another incendiary solo from Clarkin.

As a fan you never actively give up on bands that have been part of your life for over thirty five years, even as the glory fades; you learn to take the disappointment of each new release with a resigned shrug and then go back to your old faves for comfort. So for Magnum to return with such style, such verve and so many songs worthy of their halcyon stock is not only the most welcome surprise a fan can get – it’s a true affirmation that you were right along to stick with your heroes, however little reason they gave you to do so. A triumph for all concerned on both sides of the band/fan relationship.

The Serpent Rings is out on January 17th.