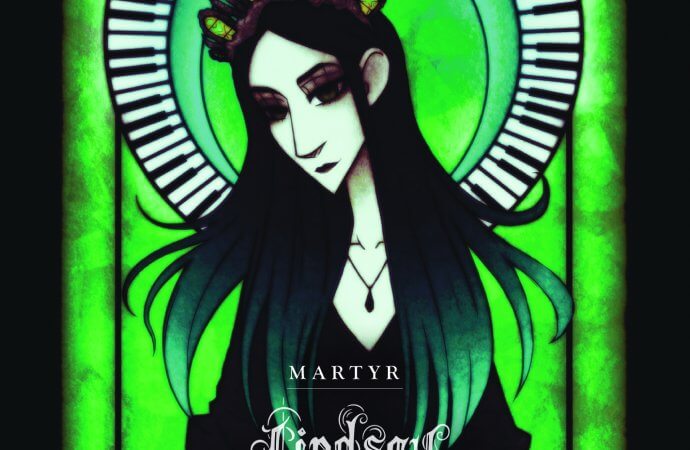 A tour de force of Gothic nu-metal style and substance...

Well, well well… if you go down to the woods today expecting this first-ever solo album from Cradle of Filth keyboarder Lindsay Schoolcraft to be a perfunctory run-through of the usual symphonic black metal tropes purveyed by her paymaster Dani Filth, then you are indeed in for a big surprise!

Actually, if you read bossman Scott Adams’ interview with Ms Schoolcraft a few weeks back then that surprise might not be quite so big, since it’s clear there’s more to her than mere black metal bombast. Nu-metal balladeering for one!

That’s right. Much of Martyr was written in conjunction with Evanescence accomplice Rocky Gray, and the overwheening feel here is of something that could well have been huge had it been released around the turn of the century. Tracks like the semi-balladic Into the Night would have been all over the radio, with Schoolcraft’s pleasantly yearning vocals backed to the hilt by Gray’s oh-so-of-it’s-time instrumentation. The album alternates between Amy Lee-style ballads – Blood From a Stone simply reeks of college rock nights, platform boots and stripey tights – and churning, stadium metal stompers (second track Dangerous Games features some seriously huge, churning riffage lifted straight from the Disturbed playbook), with our heroine mastering both styles with aplomb.

Because, for all the joking, there’s serious talent at work here. If the material is a little too close to the source at times, it’s an easy transgression to forgive when the artist’s sincerity shines through as brightly as it does throughout Martyr. She is clearly making the music she loves without any regard for trends or fads, and that has to be a good thing. To underline this fact, perhaps, the album is crowned off with a bang on-point cover of The Cure’s gothic nightmare-inducing Lullaby (actually on-point does scant justice to Schoolcraft’s superb take on the track – it’s better than the original in my opinion!), with the result being a win for anyone interested in the gothic side of rock and metal. Well worth an investment!

Martyr is released on October 7th