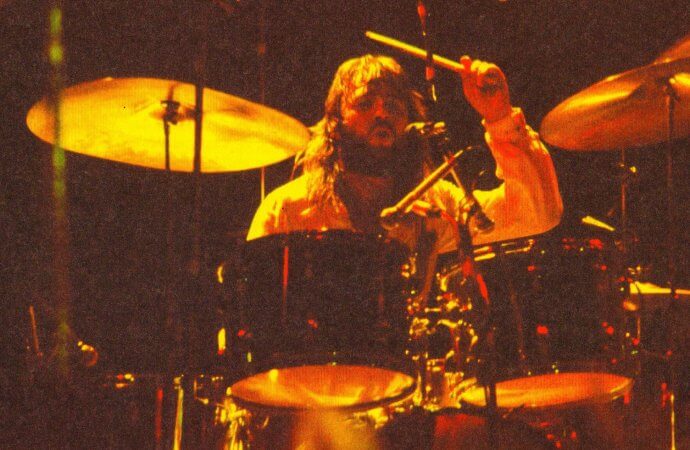 After stints with Keyboardist Ken Hensley  (as well as Rolling Stones guitarist Mick Taylor and prog rock Titan Greg Lake) in The Gods and again with Hensley in Toe Fat in the late sixties/early seventies, Kerslake rejoined his pal in Uriah Heep in 1972, becoming a member in time to co-write three songs on the band’s seminal Demons and Wizards outing from that year. His vocal ability added a new dimension to the band – none of the previous Heep drummers had provided backing vocals – as did his arranging skills, and Heep entered a golden period after Kerslake joined which lasted until the departure of singer David Byron in 1976 after the recording of the High and Mighty album. Kerslake himself left the band in 1979, returning in 1982 for the Abominog album, coincidentally a record seen by many long time Heep fans as a return to form in itself after the comparative flatness of the band’s late-seventies output.

Kerslake’s well-documented stint in Blizzard of Ozz gave birth to two albums that have come to be regarded as bona fide classics of the heavy metal canon; 1980’s Blizzard of Ozz and the following year’s Diary of a Madman saw the drummer teaming up with bassist Bob Daisley (himself later to join Kerslake in Uriah Heep) and guitarist Randy Rhoads to form the creative springboard that launched Osbourne’s soon-to-be-stratospheric solo career, with Kerslake famously singing guide vocals on the demo version of Mr. Crowley b-side You Said It All while Osbourne slept off on of his by-then-all-too-normal benders under Kerslake’s drum riser.

The later controversy concerning the court case launched by Daisley and Kerslake over lost royalties and songwriting credits against the Osbournes (launched in 1986 and found, finally, in the Osbourne’s favour in 2003) certainly tarnished the contributions made by the duo to these two great albums. In 2019, Sharon and Ozzy finally relented (at Kerslake’s request) and at the Heavy Metal Hall of Fame Gala that year the drummer was finally awarded with platinum discs for his contributions to both records.

Lee’s return to Heep lasted until 2007 when poor health finally led to him standing down from active duty with the band. His final appearance with his old sparring partners, on percussion and backing vocals, came at London’s Shepherds Bush empire a couple of years ago. In his final years he remained busy and musically active; a solo album, Eleventeen, and a documentary on his life had both been slowly taking shape over a number of years. Kerslake was an unstintingly kind man, always happy to share a word with fans whether he knew them or had just met them; A great drummer, vocalist and arranger, his contribution to British heavy metal was inestimable, and he leaves a legacy of recorded work that stands as testament to his talent and ability. RIP.