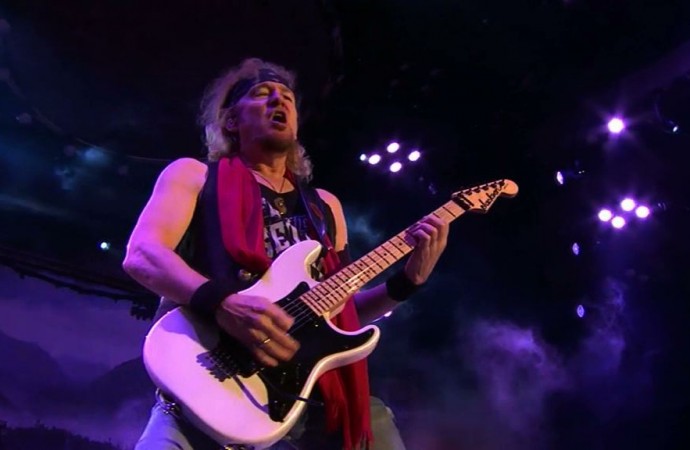 Meet the last night - same as the first night... almost.

So here we are again. As luck would have it I was in America when Iron Maiden opened up the Book of Souls World Tour, and here I am again, in Germany, on the final night of the tour. A lucky man indeed.

Of course, seeing Maiden running things their way in a Yankee enormodome is quite different to seeing them in a rank, damp and cold field at the end of a day’s festival somewhere in Northern Germany. For a start an awful lot of the crowd appear to be metalled out after a hard day watching the likes of Saxon and Whitesnake as opposed to being pent up and hungry for metal after being subjected to some of Maiden’s offspring treading the boards for an hour. Then there’s the beer. I’ve been to a few beer festivals in my time but I have never REPEAT: NEVER seen as much of the ambar nectar flowing down young gullets as I did on this miserable Friday at Wacken. And of course, Maiden manager Rod Smallwood has ensured that Maiden’s own beer, Trooper, is readily available all over the site for those wishing to get thematically well-oiled. Me? I must admit that it seemed like a good way of keeping out the cold…

If you read my review of that opening night in Fort Lauderdale, you’ll already be aware of the setlist in Wacken. The trouble with these big, set-piece sets is that they leave little or no room for variety once all the lighting cues are taken into account, all the explosions safely let off at the appropriate times. So, we open with If Eternity Should Fail, all bluster and pomp. It’s an effective opener, even if you get the sense that many of the festival goers in the vicinity would have welcomed something like 2 Minutes to Midnight to kick things off. Speed of Light follows; I still don’t have much time for the recorded version of this but it has to be said the song makes perfect sense in the live arena. Bruce Dickinson sounds a bit on the croaky side early doors, though he’s attacking the songs with a commendable vigour; By the time Children of the Damned kicks into gear he’s sorted himself out and the performance of this song tonight is, to be honest, among the best I’ve heard by the band. Everything clicks, and the band appear to be in top form. Passionate and soulful aren’t perhaps two words you’ll see together in a review of an Iron Maiden show, but that’s just how Bruce sounds on this track, and it’s marvellous.

Tears of a Clown bumps along clunkily. It’s obviously a band favourite – especially Bruce – but for this reviewer it sits awkwardly in the set and at the expense of a much loved oldie. This is a festival crowd after all… Much the same could be said for The Red and the Black; Steve Harris seems to mess up the flamenco-inspired bass part at the start of the song – at least that’s how it sounds a hundred yards from the stage, and the song drags a bit until the whoah-oh-ohs wake everyone up towards the end of the song. The Trooper is next, restoring our faith and featuring some great work from Dave Murray. Likewise Powerslave, where Adrian Smith shines and Bruce – seemingly backed by some ethereal backing vocals on the chorus – gives something of a masterclass in heavy metal vocalising.

Dickinson spends Death or Glory throwing bananas into the audience whilst wearing a monkey mask, the throwaway nature of the song possibly adding to the air of slightly forced ‘end-of-tour’ hilarity, but Book of Souls is a juggernaut of brilliance, with both Smith and Murray soloing like demons whilst Dickinson rips the heart out of a very angry-looking Eddie. Even Janick Gers gets in on the act, fingers flying as he holds his trusty black and white Strat skywards. Just above him, Dickinson hurls the recently-harvested heart into the audience to rabid acclaim. This is more like it!

At last the set is really in top gear. Book of Souls is followed –thankfully without another long speech from Bruce – immediately by Hallowed be Thy Name. Collectively the audience begins to slip into madness…

Hallowed be Thy Name is one of heavy metal’s true, lasting treasures, and when it’s done well – and tonight it’s done very well – there are few songs to touch it in live performance. ‘Scream for me Wacken!’ demands Dickinson as the band head into the solo section – and we do. Every last one of us, as Bruce wordlessly exhorts the crowd into the biggest single cheer of the night. It’s magical stuff, tribute to the man’s power as a frontman and the music’s power to unite us all as one in the moment. My spine is tingling, the hairs on the back of every inch of skin are standing to attention, and then Bruce makes a rather amusing allusion to the 1966 World Cup Final. It’s absolutely everything you could want from the man, and more.

That’s it. The night is effectively over as a contest, the crowd absolutely in the band’s pocket. They don’t need a big audience participation number at this point, but they throw Fear of the Dark in anyway and the whole place is very pleased. Even Steve Harris – who’s looked a bit cranky all night, possible weighed down by the slow house market in Essex at the moment – is running all over the stage, mouthing the words as only he can, Adrian Smith wielding a red Destroyer (sadly not the old Ibanez of yore – this one’s a Jackson) with malicious intent the crowd bursting their lungs in support. If there was a roof over Wacken this would have brought it down.

Iron Maiden brings the main set to an end as ever, Eddie’s head actually exploding at the song’s climax, then darkness. The second half of the set has taken it’s toll on the audience – me included, I’m exhausted, but when the spoken intro starts up to Number of the Beast we’re back into it, heads banging, fists pumping, lungs bursting, whatever it takes to get through the song. And that’s just the band. The rest of us just look on appreciatively, adding our voices when required, marvelling at the majesty of it all. Bruce then pauses to give another speech – actually this one is quite brilliant, a heartfelt call for unity – before Blood Brothers reminds us just what metal means to us all, without exception. Wasted Years brings everything home, newly made friends draping saturated arms across each others shoulders and singing along, old chums high fiving one another with teary eyes and froggy throats, and then the band are gone, with Bruce telling us they\ll be back for some shows next year. I’ll be there.