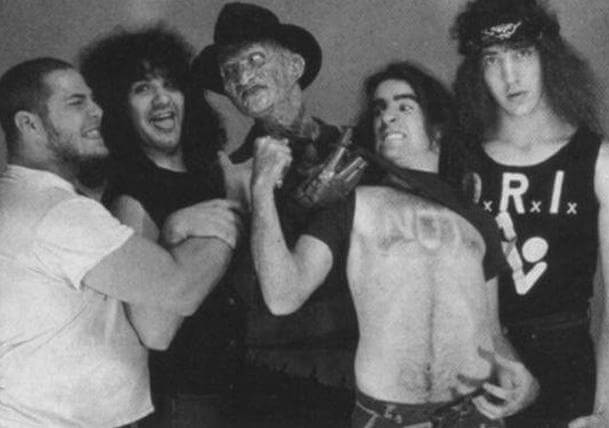 It has been almost a decade now since decidedly un-metal people have flooded the scene’s underground, mainly in a bid to look cooler and edgier than their friends. They’ve been squatting here for so long now that they’ve even got bands of their own, complete with fan bases that reflect their insincerity and obsession with all things novel and shallow. The Emperor wears no clothes, but he’s getting better at convincing people that he’s well-dressed, or at least wearing a happening-looking Blood Incantation shirt. It’s a real downer for a metal lifer when these clowns catch onto something proven and great in its own right, but if you want to avoid the heartbreak of hipster acceptance, here’s a handy list of bands they’ll never embrace….

Blood is Satanic death/grind, which means they have a grindcore presentation but with Satanic lyrics in lieu of political themes, and they also like to bear down into dark progressions that will not stroke the reptile brains of smelly punker tourists. Blood defies simple categorisation, and they’re just out to hail evil and cave your head in while blasting Napalm Death out of the water. However, none of that makes for a good conversation piece at the Kombucha counter.

This band is “sketchy”, which in non-wimp terms means “authentic black metal”. It’s true that Rob Darken has espoused overtly nationalist views, particularly in his early work, but it pales in comparison to the rhetoric of scenester favourite, Burzum. For every kid with pink hair and a Det Som Engang Var shirt wailing about how metal is owned and operated by Nazis, there’s a kid listening to Graveland and minding his own fucking business.

Death metal has become quite trendy with all the wrong people in the last couple of years, since punk is dead (this time for real), and Deafheaven were revealed slurring the demographic that makes up most of their fan base. Luckily, there are many rock-solid institutions far too scary for the day-glo doofus contingent to embrace. Sadistic Intent are basically frozen in time with leather pants, armour, pointy guitars, and ripping death metal anthems that have nothing to do with science fiction or attending an EDM show while wearing a safety orange Tomb Mold hat.

Vaunted, venerable, and influential, Immolation inspires fascination with its long-running fan base, but nothing they’ve done will place them in “flavour of the week” territory with the death metal tourists. While technical, they eschew any prog geekery that appeal to guys with bad skin, and their unpretentious execution ensures that only serious listeners will subscribe.

Black metal image, death metal heaviness, and lyrics that will deeply upset anyone who has ever typed “#metoo” (though it probably wasn’t even them, too). Profanatica is weird, gross, and ugly, which is perfect repellent for posers looking for more aesthetically slick shock value. People who like Profanatica are usually fully committed, considering mastermind Paul Ledney‘s unorthodox behaviour – the guy has posed naked in group photos and once licked someone else’s semen off a Bible on video. More than half the songs are about sexually abusing the Virgin Mary, with “rape” being the most commonly used word, followed by “cum” and “shit”. Definitely unwoke, yo.

Between the mechanized onslaught of black/death riffing with no groove to be found, and the lyrics about Satan and martial might, this band holds no appeal for anyone who is only out to look cool instead of actually being cool. Singer Pete Helmkamp also wrote some Nietzsche-inspired tracts that hurt people’s feelings.

While the accusations of Nazism are utter bullshit, Marduk remains problematic with many in Gen-Z because they refuse to apologise for things they didn’t do, and still tout an open-ended fascination with World War II in the meantime. Singer Mortuus is a beastly fellow who is known for knocking out fans who don’t respect his space, and the band as a whole is far too burly to resonate with skinny-jeans enthusiasts. They also more recently wrote a song called Werwolf, which was a tongue-in-cheek effort specifically designed to yank the chain of Antifa after they interfered with several Marduk concerts in the US. Balls of steel, those Swedes.

While classic speed metal has caught on with weekenders, Razor has managed to escape their revisionist clutches, in large part to the avowed violence that spews from every track. It seems unlikely that poser dorks would want to listen to song after song about how the band enjoys beating up people like them. Razor is dude metal for dudes, now and forever. Suck it, nerds!

And last, we have the equivalent of hipster Kryptonite. Speak English or Die was considered pretty offensive upon its release in 1985, which means it is exponentially more offensive circa 2020, when adjusted for inflation. While the lyrics were mostly a put-on, the title track and songs like Fuck the Middle East were decidedly un-PC before the concept was even brought into public discourse. They’ve been regularly (and hilariously) accused of being Nazis despite the fact that members Scott Ian and Dan Lilker are Jewish. Go figure. Serious or not, S.O.D. remains the gold standard of un-cool, un-hip, and untouchable, which is why you ought to check them out if you somehow haven’t already It’s only the single most influential crossover album of all time, after all.