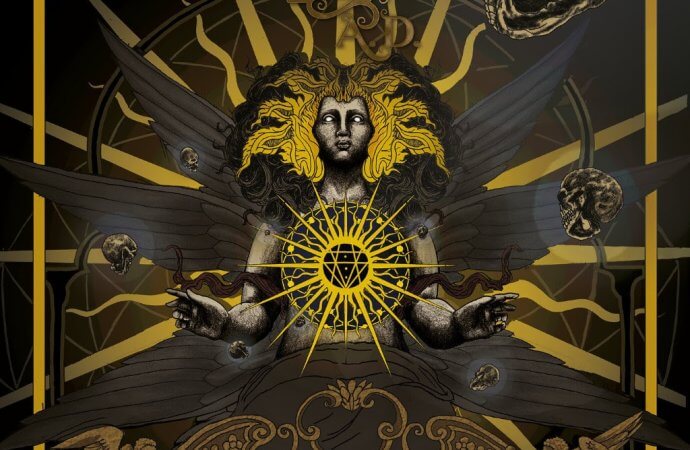 Norwegian doomstrels Hex A.D. begin new album Netherworld Triumph with a beautifully stark piano piece entitled Himmelskare (which according to my ever-dubious google translate means Sky Crust); It’s faintly redolent of Judas Priest’s Prelude, the piece which introduces Tyrant on Sad Wings of Destiny. It’s a lovely way to start a record but acts as a double aged sword as you know that the track that Hex A.D. have come up with to follow it couldn’t possibly be as good as Tyrant, could it? This way disappointment lurks.

Actually, whilst you’re right about the not-being-as-good-as-Tyrant bit, the song in question, Skeleton Key, Skeleton Hand, ain’t half bad, being a Hammond-drenched slab of seventies inspired hard rock that brings to mind names like Uriah Heep and, to a lesser extent, Deep Purple in In Rock mode.

It’s a hard hitting piece and no mistake, as Rick Hagan and Mags Johansen construct an adamantine wall of sound armed only with axe and organ. In terms of sheer impact it’s also the album’s high watermark, although there is plenty else on offer that old heads and fans of patchouli-drenched denim will enjoy as the album unfurls.

The album’s centrepiece is an eleven and three quarter minute sonic diptych, comprised of Netherworld Triumphant and Neverworld Triumphant II, which seemingly offers a precis of the entirety of seventies rock within its necessarily concise timescale. Little quotes and nods to the greats run throughout the two songs, though mercifully we never find Hex A.D. turning into some sort of exercise in live Karaoke. The band has an easy, respectful relationship with the era it’s plundering, giving the music a gloriously loose, jamlike feel. Hagan and Johansen take turns to offer seemingly effortless extended musical passages; In NT I Hagan peels off a casually effortless solo that will have listeners’ air guitars deployed in their thousands, before kicking off the second piece of the composition with some stentorian riffage that, in a flash of modernity, sounds a bit like something off of the last couple of Opeth albums.

So it’s not all rose-tinted riffage and sepia songwriting.

However, the overwheening feeling you get from listening to this record is that you are in the presence of long-lost Gods of the past. Boars on Spears, probably the best track on this album as far as your correspondent is concerned, is a heady call to arms, demanding a Proustian remembrance of times rockular long past; which is a florid way of saying it reminds me of a cross between Wishbone Ash and Jethro Tull, but you get my drift. And even if you don’t, you can always just listen to the music and make your own comparisons and appreciations – it’s that kind of album, eminently listenable, but always prompting the mind to distant musical memory.

The band are joined by long-term associate and former Dio alumnus Rowan Robertson on WarChild, but they seriously need no sort of celebrity push as far as their music is concerned. This is a band that comes fully equipped as a juggernaut of skill and precision, sure, but also as that precious thing, a progressive band that isn’t afraid to put in a bit of melody as required. If you enjoy any of the bands I’ve given by way of comparison in this piece, then there’s no way you’re not going to enjoy Netherworld Triumph, an album which is a triumph indeed.