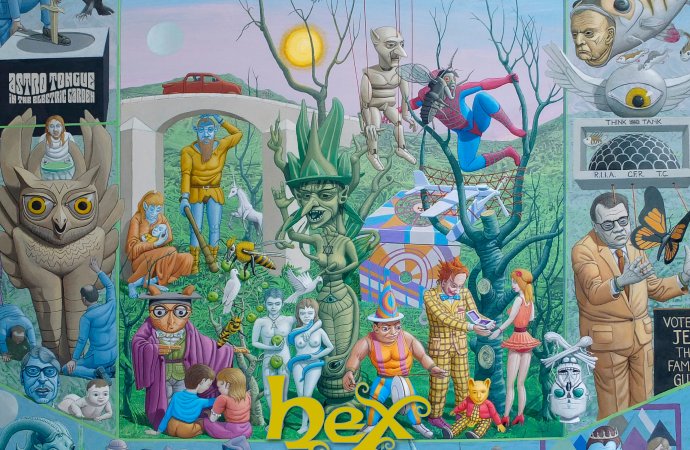 It doesn't get much better than this, prog-fans...

Norway’s Hex A.D. are back, a mere sixteen months or so since they last enchanted us with the Netherworld Triumphant album; in truth, not much has changed in camp Hex sonically since then. However, that’s something of a plus point in this writer’s opinion, as the band, eschewing the chance to throw the baby out with the prog metal bathwater, have merely honed their skills and sharpened their metaphorical axes, in the process refining what went before into something possibly even more dangerous, and certainly just as alluring.

Overall, the feel on Astro Tongue in the Electric Garden (and I shall type that title only once), is a tad more in your face. Riffs that threatened assault and battery of the ears last time around actually carry the deed out this time, and even the Hammond work of Mags Johansen is somehow more menacing. The glowering interplay of Johansen and guitarist Rick Hagen on The Day The Sky Exploded is a soaring, yet resolutely earthbound piece of doom brilliance, the instruments combining to spread dread and fear wherever they might be heard.

It’s this relationship between Johansen and Hagen that underpins and defines the H A.D. sound, and the adamantine sheets of sound they throw up on every song create soundscapes that aren’t easily forgotten despite the overall lack of what an untrained ear might call ‘hookiness’. There are no earworm moments like Boars on Spikes here, the band preferring to work as a unit to wring the utmost value from their instruments rather than looking for transitory thrills. That said, the titanic pairing of Hawks & Doves and Old Bones, two movements in what the band calls The Monsoon Suite, are as good if not better than anything the band has committed to tape yet. The first is a lurching, riff-driven blues that re-animates the first Black Sabbath album as seen through a prism of latter day names like Wilson and Akerfeldt; the second is a little more melodic, and happy to dwell in the Dio/Rainbow shadowlands of classic rifferama and swirling keyboard interplay. As a pair the songs represent everything that makes Hex A.D. such an interesting prospect for a listener – the unapologetic reverence for craftsmanship whilst still acknowledging the listener’s entertainment requirements is a skill many modern day prog bands get hung up on – and, whilst the rest of the album is never less than top drawer it’s this brace of tracks I suspect most will return to more often than the others.

Astro Tongue… is an album to immerse yourself in; a record that warrants time on the part of the listener to fully appreciate what’s going on. A darkened room, maybe, some top-notch headphones and a bottle of good red to help the appreciation process along… lose yourself in the filigree timelessness of A Stone For The Bodies Not Found, and emerge all the better and more fulfilled for the experience. The new Gods of prog metal? It’s a big claim to make on a band’s behalf, but on the evidence of this album, it might just be the right one.

Astro Tongue In The Electric Garden will be released on February 21st.