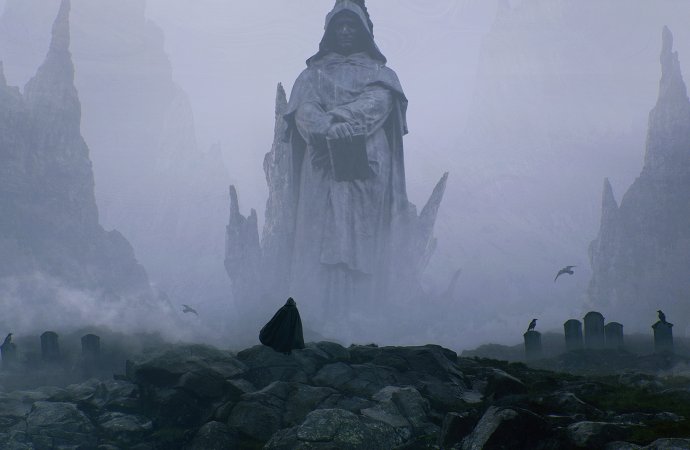 Sleek dark metal from the US...

Sentinel Daily editor Scott Adams detailed me with the task of reviewing the new output from Pittsburgh metalheads Deathwhite just the other day; I agreed to take on the assignment more out of curiosity than any feelings of enthusiasm as, with brutal honesty, I had to admit I’d never heard a note of their music before. New experiences are good, right? So here I am after a crash course in the band – and I’m glad I said yes!

The artists behind the ‘dark metal’ that Deathwhite play prefer to remain anonymous; that ain’t a new thing, but it’s hard without really getting into the ethos of the band to see why they’ve made that choice, possible contractual hassles elsewhere notwithstanding. Still, whoever does what can be assured that they’ve done a fine job on Grave Image! Every song is a sleek, streamlined take on the gothic/doom scene as it stands in 2019/20… Clean vocals dominate – which is a plus point here, I think – and songs tend to stay at a slow-mid pace, relying on crashing power chords interspersed with quieter passages to give a good sense of light and (very dark) shade. The title track is a particular favourite of this reviewer; although the band are obviously taking many cues from Brit icons like Paradise Lost at times (at others they approximate a less-crusty take on the My Dying Bride vibe, albeit in a more straightforward kinda way), they definitely retain a sense of ‘Americanness’ about them. Possibly it’s the vocals that give that sense, I’m not sure. Definitely the phrasing used by ‘Singer X’ does sound a bit slicker than might be used by a Limey. In fact, on close out track Return To Silence I even thought I detected a hint of Black Veil Brides’ Andy Biersack in the vocal approach. Gothic doom with a pop metal twist? Sign me up!

And so, all these things considered, I guess a diehard fan of the genre might deduct points from this record because of the slick listenability of some of the music that the band curates. Me? I’m all for the ‘iron fist in a velvet glove’ approach, so I’ll be recommending this to all my metal pals very soon indeed. A big thumbs up from me to whoever is responsible for Grave Image!

Grave Image will be released on January 31st.