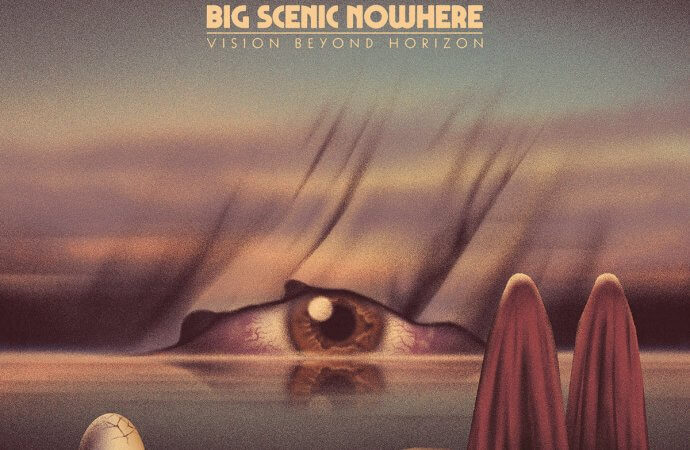 It ain’t a supergroup, as such, but there are enough big names congregating to pay homage to the riff on Big Scenic Nowhere’s new album, Vision Beyond Horizon, to maybe qualify it as a super project… if you get my drift. Essentially a vehicle for collaboration between Gary Arce (Yawning Man) and Bob Balch (Fu Manchu), BSN has grown into a little slice of heaven for anybody who counts themselves a fan of Desert or Stoner rock.

Unsurprisingly for a recording featuring so many guest contributions, there’s a fair feeling of variety spread across the album. This ain’t just some sort of fuzz-tone smorgasbord for the reefer-madness generation; the band sounds genuinely amped up and pissed off on the hardcore blast of second track The Paranoid, which adds a dose of Black Flag nastiness to the mix, whilst two tracks later, Hidden Wall gives a fair approximation of The Doors had they started in 2015 instead of 1965; there’s a pleasant feeling of nobody having their hand on the tiller, and whilst Balch and Arce clearly give form and shape to the ideas which frame each song (ie – the riffs) each musician who comes in to the session is clearly able to push and pull their own parts as much as they like. The result is surprisingly enjoyable; these people are professionals, after all, but even so what BSN have pulled together here is still pleasingly successful.

Okay, okay, I haven’t thus far alluded to which illustrious guests are on the album, have I? Well how about Nick Oliveri on bass, for starters? Or The Well’s Lisa Alley who contributes a nice co-vocal on the loping boogie mayhem of Shadows From The Altar… Elsewhere Mos Generator’s Tony Reed pops up, whilst Them Crooked Vultures all-rounder Alain Johannes and Spiritual Beggars alumnus Per Wiberg work their not inconsiderable magic with nice results.

In short, this is pretty much a must have if you have ever counted yourself a fan of the desert rock scene; not only because of the variety of names involved here, but thankfully also because the quality of the songwriting is never less than top notch. Well worth some of your time, and no mistake…

Vision Beyond Horizon is out on January 31st.