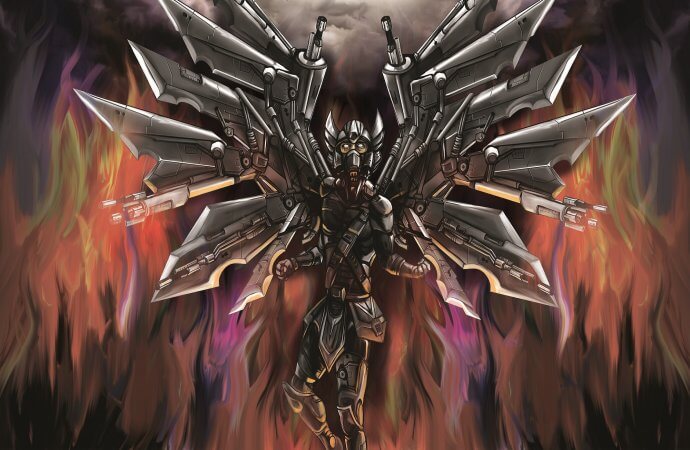 Raw, stripped-down metal from the US...

American traditionalists Angel Black certainly love their metal; Their new album, Killing Demons, is shot through with the stuff, so much that every seam is leaking something ferrous…

Sometimes they let their influences get the better of them; Opening track Strikeforce is a completely unhidden attempt to shoehorn the main riff from Symptom of the Universe into a different song entirely, but for the most part the band offer up a genuinely enjoyable romp through metal’s eighties glory years, mixing the usual names with a little hint of the melodic sensibility of names like Icon and Leatherwolf – in idea if not always execution. At times their unbridled enthusiasm outstrips their resources – The Dream That Stood Alone really cries out for a massed choir of backing vocalists, for instance, rather than the paltry single backup vocalist John Cason gets on the strident chorus. A little bit of a tweak here and there, and the band would be looking at creating some real classic metal with this track in particular.

But the flipside of this back-to-basics form of production is that if you like your metal raw and unalloyed, this may well be the album for you. Mike Jelinak’s savage guitar tones really punch through on every song, with his prowling chug on Killing Me being a particular standout. There’s a proud honesty in the band’s work that screams out from every track, a fundamental faith in the power of metal that is hard to resist no matter how much you want to hear just a little spit and polish every now and then.

The band round the album out with an absolutely storming cover of Metal Gods – prefaced cheekily with a snatch of Dio’s Holy Diver for good measure – as if to confirm their allegiances if you hadn’t already guessed in the preceding half hour of headbanging fun n’games. This is metal, nothing more, nothing less, and within it’s parameters Killing Demons is a bloody brilliant exposition of the genre.