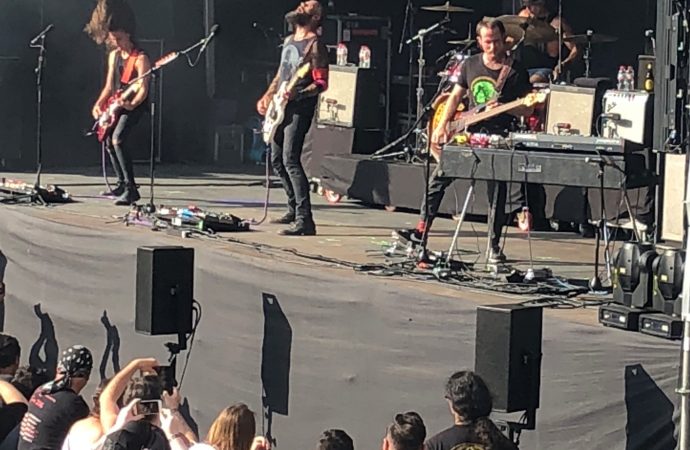 The Be Prog My Friend Festival kicks off on a hot afternoon in Catalunya...

At first glance Barcelona’s Poble Espanyol concert venue looks like a history buff’s dream, full of old world Spanish charm. It was actually built in 1929 as part of Barcelona’s International Expo and isn’t half as old as it appears, but nonetheless the august surroundings add a certain amount of pomp to the prog rock and metal we’ve all come to enjoy. When Sentinel Daily arrives on this blazing hot Friday afternoon locals Persefone are already in full swing but the uncompromising heavy they bring to the table is suffering from early sound gremlins. Once these are resolved the band’s stolid but entertaining fayre does a good job of amusing the early punters with some crushing riffery. The closing song – whose title escapes us, I’m afraid to say – is a real death prog anthem that leaves the locals – and interlopers – wanting more.

Strangely enough Americans Baroness fit right in with their hipsterish alt. Rock. March to the Sea is an early contender for song of the day

Little Things is almost as pleasing, it’s UFO styled opening building into a superbly melodic piece of modern metal, and the band make an unlikely early contender for surprise package of BPMF 2018.

After pausing for some much needed solid food – the beer really is slipping down a bit too readily at this point, we turn our attention to Pain of Salvation. It’s pretty hard to be a metal hero – even a Prog metal hero – in flared tracksuit pants but pos frontman Daniel Gildenlöw gives it a red hit go.
The man is a god, of course – Sentinel Daily often gets a whiff of Glenn Hughes when the man is at top cruising speed vocally – and tonight is no exception.

He also runs a neat line in Bon Joviesque crowd manipulation which is as surprising as it is welcome. On the evidence of tonight Hair prog might now actually be a thing.

Even if it isn’t tonight’s crowd are unequivocally with the band, giving them the first bona fide rapture of the weekend. And for a change Sentinel Daily is with the mob here- the band don’t put a foot wrong all night. Last song In The Passing Light of Day is utterly spellbinding.

Headliners A Perfect Circle presage their performance with tracks by Adam and the Ants and Elvis Costello and the Attractions which is frankly a mistake; even songs like second track Eat the Elephant, one of the best tracks on display from the band tonight, aren’t really fit to string the guitars of Adam or Eric. Somnolent  – if always pleasant – indie rock is the order of the day throughout. And although the now pretty packed Poble Espanyol is lapping up every note Sentinel Dailyremains stoically unmoved. So Long and Thanks for all the Fish perks things up a bit, especially if you remember dream pop like Dream Academy‘s Life in a Northern Town, bit this is essentially lazy music cleverly packaged for an audience  unable or uninterested in going back to the source. This is underlined when the band’s workmanlike transformation of Depeche Mode’s People are People from delicate call for unity to clodhopping karaoke anthem is greeted as a conquering hero.
Still, what do we know. Sentinel Daily stands seething whilst the rest of the crowd goes if not mental then certainly discombobulated, which is surely the point of these gatherings. Finland’s Oranssi Pazuzu rounded the evening’s entertainment out but by then your correspondent had fled in to the night in search of elusive taxis and a dose of Catalunyan kebabery. Round two awaits!