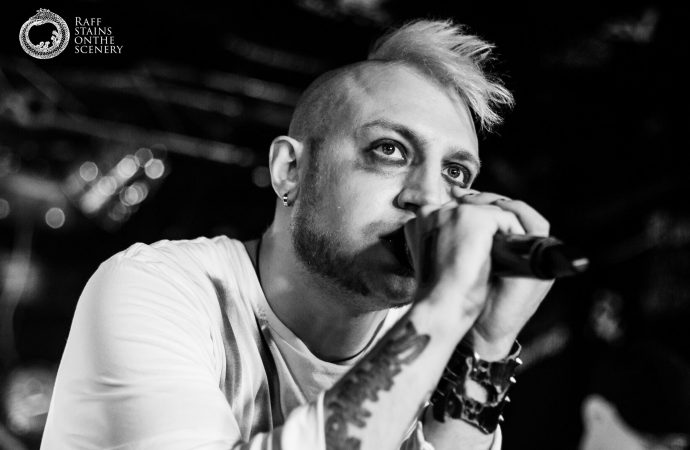 Scott Adams talks to 1919's Rio Goldhammer about the re-emergence of the band and their superb new album, Bloodline...

1919 are one of those bands that in many ways form the cornerstone of rock music – the good bits of rock music, anyway- as we know it. One of the bands who keep going in the face of all the available evidence that says maybe a call should be halted, whose members keep the flame of the band alive in the thirty three years it takes to put out a second album and then find their guiding light stolen by the Reaper’s hand just as times seem to be getting a little better, but, most importantly, a band whose music might not have been prolific but which was, is and shall remain among the most important releases by a band from Britain in the rock n’roll era. They have a story and it needs to be heard.

And it will be, of that I’m sure, but today I’m talking to splendidly named vocalist Rio Goldhammer about the present day for the band. They have just released a Sentinel Daily-approved album, the excellent Bloodline, and as our call is connected the band are in high spirits as they load their van in advance of a show in a few hours in Brighton on the UK’s South Coast. I kick off by asking how the first show of the tour, in Leeds the night before, went. “It was good! We went down well and it was a nice local kind of thing for (new guitarist) Sam (Evans)’s first gig with us. It was a good night”.

Let’s talk about the new album, Bloodline. It’s a startlingly good record. How did you go about maintaining the original ethos of the band whilst trying to add some sort of modernity to it? “Well, it wasn’t really contrived to sound like that. When Mark (Tighe, the band’s driving force sadly now deceased) and Mick (Reed, drums) started working together again for the first time in thirty-odd years it just kind of naturally evolved. Obviously I’ve got some more modern influences anyway (Goldhammer came to the band as a mere pup in 2014), just, and it just fitted! Obviously we’d done Deathnote already (an EP released by the band last year), so we had had some time to hone the sound and get to know each other as musicians; But it wasn’t really a conscious thought… the band was just kind of frozen in time in a way! We picked it up where they left off”.

My first thought when I heard the album was how ‘authentic’ the record sounded. Obviously it is authentic because the band were in the centre of the goth/post punk movement at the time in the early eighties but it is like a time capsule. “Yes. But we’re not trying to be stuck in the past in any way; When you talk about authenticity I don’t think necessarily the authenticity comes just from the era. Yes they were there doing it right at the start but you have to look at the circumstances as well. They had all their equipment and were rehearsing in a freezing cold barn, against the socio political environment, and so much of that is embedded in this band’s culture. Where we rehearse now is quite a dark little cave. But it’s ours, we recorded our album there. My lyrics touch on a lot of things that Ian (Tilleard, original vocalist)’s did in the eighties. A lot of that comes from the way the music is talking to me as well as my own experience. So when you say authenticity I think it’s more than just a ‘year’, you know?”

Although you mention socio-political conditions, and, eerily, in Britain those conditions are very similar to the early eighties aren’t they. Almost to the point where it seems the clocks have been turned back! “Absolutely! And in the song Bloodline there’s a bit of a nod to that. There’s a Sex Pistols reference, and a mention of one of the early 1919 tracks. You need to listen with a pen and paper at the ready!”

So you were active already in the Leeds underground scene – can you tell us how you came to join the band? “I actually just answered an ad! Mark was looking for someone to work with. It wasn’t a very detailed ad. It just sort of said ‘punk singer needed to sing on a demo, maybe work on stuff’. It was really vague but I thought it sounded like a laugh, I wasn’t doing anything, so I went down and met Mark and we started working together. Just writing and demoing all the time”.

So do you feel that 1919 will be an ongoing thing now and that there will be more releases? “Yes, absolutely. It has to be really. There was a time during Mark’s illness where he kept saying ‘you have to carry on!’ but we weren’t really thinking about life afterwards… we were just thinking about there and then and being there for him as friends. The vinyl release of Bloodline comes out in September and that’s going to have two bonus tracks on it that were the last two we recorded with Mark. And on top of that we’ve got all sorts of demos that we’d been working on because we never stopped writing. So there’s already stuff in the bank”.

And I guess that’s the best way to remember him, isn’t it? To carry on his legacy. “That’s it. He lived and breathed his craft, and music. At his funeral we made it shorter on words so we could get more music in. We just sat and listened to songs which was exactly right. Even when Mark was really ill his biggest concern was that he was holding us back. We didn’t think like that – we just wanted him to be well and to be there for him when he wasn’t. So yes, we have to – we don’t really have a choice”.

There’s a lot of background noise now, making it hard for me to hear Goldhammer’s soft-spoken musings. Maybe it’s time to draw things to a close? “We’ve just set off now. They were loading up and obviously as a singer I was no help with that at all, but we’ve moved off now so hopefully it’ll get quieter”.

Good! So here at Sentinel Daily we deal an awful lot in ‘classic’ punk and heavy metal, and it’s sad but true that a lot of our readers might not necessarily have heard of 1919. What song would you point them to as being the most representative of the band on Bloodline? “I don’t think there is one. You’ve just got to start from the beginning. Obviously there’s the title track, which is very cool and it’s a punk one as well, but they all are, and the album ends on Life Is… which is spacey, almost krautrock weirdness, so I don’t think you can sum up everything in one track. Sorry, that’s a very diplomatic answer! I’m not trying to be a politician or anything! Just go buy the album!”

And listen to the whole thing! You heard the man!

The 1919 album Bloodline is out now – though not yet on Vinyl – on Westworld Recordings.