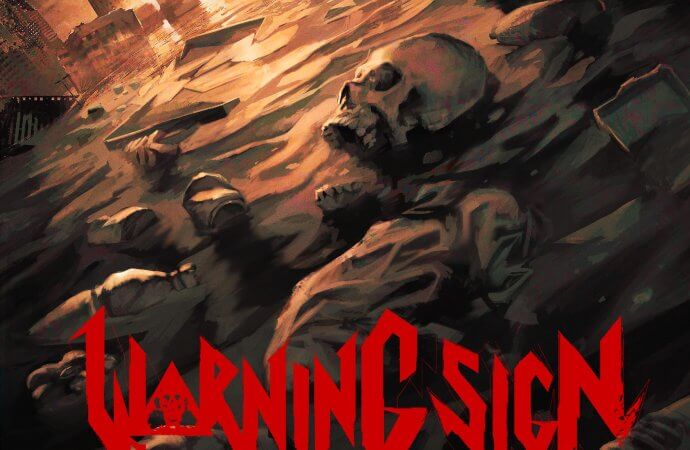 I first wrote about Quebecois metallians Warning Sign in the Crusade of Power back in September 2016, where I enthused about their debut album Left To The Sharks, which was our album of the month for that month. I’m super-pleased to report that, nearly four years later, the band is still a metal force to be reckoned with.

Opening with the neo-thrash stylings of Redemption is a master stroke, as the song won’t fail to get the blood pumping, all the while whetting the appetite for what’s to come. If you’re a fan of classic Metal Church, this is a song that you’ll take to your metal heart straight away. Next track Broken and Bare is just as good, reigning in on the speed a little but never letting up on intensity. It’s still a fast-paced rocker of a song, but somehow just a little more considered than the opener. Vocalist Maxim Beaulieu gives an assured performance, both as singer and as guitarist with fellow six stringer Olivier Perrier-Muriel on this track.

One of the most refreshing things about Warning Sign is their ability to evoke mood without ever actually just reminding the listener of older, more illustrious bands. Thanks to Beaulieu’s commanding vocals Savatage will occasionally flit across the listener’s consciousness, and Metal Church are pretty much omnipresent throughout the album, but apart from that Warning Sign are very much their own band. And that’s an exciting thing to be able to report.

One of the other key points to note is just how huge this album sounds. Warning Sign might put their albums out themselves, but that doesn’t mean to say they cut corners with things like sound quality. Producer David Lizotte and the boys have forged an absolutely huge sound with Path To Destruction, a sound which can easily hold it’s head up in the company of releases made with label patronage. This is definitely the real deal.

Standout track Hell On Wings is a superb synthesis of eighties metal, from the Jake E. Lee riffage right through to the simple yet effective chorus which remembers Fifth Angel in their pomp, but again it retains the Warning Sign stamp rather than resorting to mere pastiche. Heavy Lies The Crown ends the album with eight minutes of pompous bombast, but whatever facet of true metal you favour, there’s plenty to enjoy here.

Path To Destruction is out on April 10th.