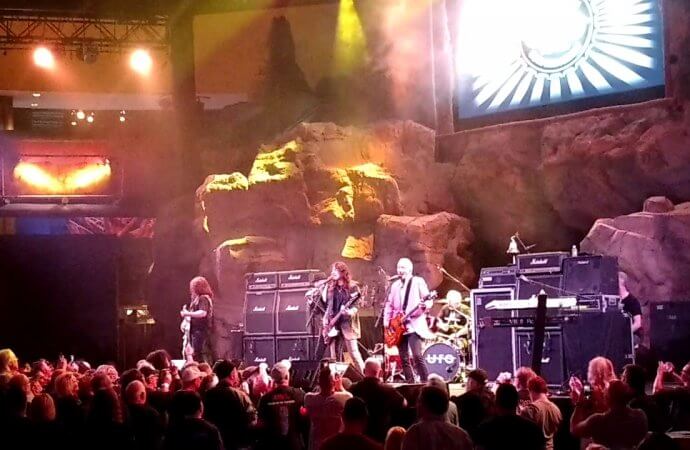 I’ve never been to a show like this. The Wolf’s Den is a three hundred seat, free entry venue in the middle of a Casino in Connecticut – I find myself here, as ever, thanks to a work engagement in New York –  and it makes for a very intimate setting in which to witness Brit rock survivors UFO on the current leg of their Last Orders farewell tour.

It’s a tour shot through with sadness not just because the band are bowing out after fifty – you read that right – years at the top but also because loyal servant Paul Raymond passed away earlier this year as the band took a short rest from the road. But UFO is a life sentence for some, and longtime MIA rhythm guitarist/keyboard and saxophone player Neil Carter was hunted down and snatched from a life of quiet obscurity to step into the breach just like he did nearly forty years ago…

I’m glad he did, too, because throughout tonight’s show he proves time and again what a vital cog he’s been in the UFO machine down the years. But the real star on this final run is, of course, vocalist Phil Mogg. He’s rumoured that this isn’t the end for him personally as an entertainer – vague threats of becoming a performer in old people’s homes on England’s South Coast have been bandied about – but it will be the end of UFO as a touring and recording entity. So here we go one more time, and, it has to be said, the man himself is in astoundingly good form vocally. We Belong To The Night and Venus are early successes, his rich, aged tones cutting through the drum heavy mix with power and clarity, aided at crucial points by Carter and bassist Rob De Luca, but never sounding frail or burnt out as so many of his vocal contemporaries do these days.

Venus in particular is a pleasant surprise; The Walk on Water album from whence it comes isn’t one of my fave UFO records, but here it fits in perfectly and guitarist Vinnie Moore makes sure Michael Schenker (heresy I know, but that’s my opinion and I’m sticking to it…) isn’t particularly missed overly much with some nifty soloing. But what do I know? As a proud Welshman I’ve always been a Tonka Chapman man anyway…

All time crowd favourite Lights Out is next; propelled again by some thunderous stickwork from Andy Parker and Carter’s squalling Hammond tones, this is, quite simply, one of the greatest songs in the British hard rock canon. Carter in particular looks like he’s having a ball to be back on stage playing music like this, but the others, especially a Saturnine, be-hatted Mogg, aren’t far behind. I keep grinning to myself and those around me – this really is a band to be reckoned with, even at this stage.

Burn Your House Down, from 2012’s The Visitor, gives everyone a chance for a little breather, and then it’s into the home turn and hit after hit after hit. Cherry kicks things off – ‘we’ve been forced to play this’ complains Mogg, though if that’s the case his delivery is far from same – and then the band just let rip. Love To Love is greeted with as much rapture as a small house can muster (clue – that’s quite a lot), with Carter and Moore grinning like Cheshire Cats as they register the crowd’s approval. Theoretically this is a point in the set where Mogg’s advancing years might catch up with him; stripped of the band’s bombast, would his septuagenarian vocal chords stand the strain? Of course they did. This song has always been one of Mogg’s tours de force live, and tonight turns out to be no different. The crowd howls it’s acclamation in response.

After that it’s plain sailing; Too Hot To Handle kicks off the beginning of the end. The band and audience are ready to raise the roof now, and everyone gets down to the serious business of sending off a rock institution with the sort of verve you’d expect from people who’ve been on the five dollar draft Buds in Genos Pub for some while… Rock Bottom ends the main part of the set in gratifyingly heavy fashion, with Moore again taking an extended solo with pleasing results.

Encore time is brief – I’ve never been one for long drawn out, tearful goodbyes so it’s good to get things over with just the two songs. What did they play? Well, this is the internet so I assume you know, but if you thought it would be anything other than Doctor Doctor and Shoot Shoot I’d like to suggest you up the strength of your medication. Of course they played them. And of course they rocked, as did we. And then they left.

UFO have been around for my entire life as a rocker. It’ll be strange not to have them around anymore, but my word this night was a magnificent parting gift. Thanks for everything guys.