Tylor Dory: “There’s no flub on this album”… 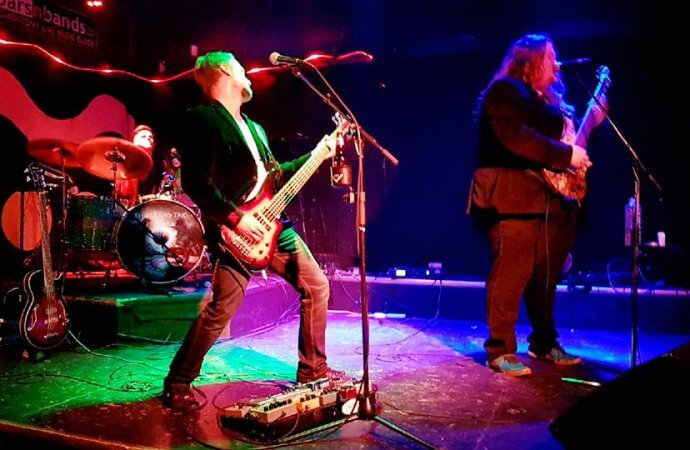 A new star is rising in the Canadian prog firmament...

In Canada, the only thing tastier than the Poutine is the prog-metal, and the Tylor Dory Trio is no exception. Their first full length album, Unsought Salvation (released last month) is dense, state-of-the-art progressive metal where ultra-heavy, corkscrew guitar riffs a la Periphery and The Contortionist substrate emotive, hook laden vocal lines. I caught up with guitarist, vocalist and primary songwriter, Tylor Dory, to see what’s happening up North.

“I’m singing in another band locally here called called Skepsis. and I don’t know if you’ve heard of the band Striker (I have, but thought it was spelled with a ‘y’), but our drummer, John [Jonathan Webster], just joined them. So we pretty much just tour around the country here and there but nothing too crazy — yet!”

I’m hearing a lot of things in your music, what are some of the primary influences? There seems to be a pretty broad spectrum of sounds here. “It’s definitely broad! (laughs) I would say Opeth is a big one. And all of us – when we were younger – were into Dream Theater. They got us to be somewhat competent with our instruments. Grunge bands like Alice in Chains and Soundgarden as well. Led Zeppelin for me is the biggest one, even though we don’t sound anything like Zeppelin – Porcupine Tree, Leprous – you know, all that good proggy stuff.”

I can definitely hear some Chris Cornell influence in your voice. “Well, that’s a compliment, thank you very much. He’s definitely one of my favourite singers of all time.”

I listened to just a bit of Skepsis before this interview – are you mostly growling in that project? “Maybe it started toward a fifty fifty split, but I would say it’s more harsh vocals than clean.”

What do you find more challenging to do vocally – harsh or clean? “Harsh vocals are harder to do for longer periods of time, but there’s a little bit more to the clean singing, I guess. You have to be a little sharper with your ears.”

Your new album, Unsought Salvation – is it a concept album? “Yes – loosely so. When I write lyrics they have different layers to them. I guess a good comparison would be, like, Coheed and Cambria, where there’s kind of a conceptual meaning to the songs and then there’s the personal meaning of the songs. On top of that, I like to put a lot of pop-culture references that maybe go unnoticed by most people (laughs).”

Without giving too much away, what is the theme – or concept – of Unsought Salvation? “I’ll be somewhat vague, but the basic concept of the album is about someone who is searching for what they think is missing in their life, so they go looking for it in different groups, different places, or with different people, but at the end of the day, they realise that the void will probably never be filled.”

That’s pretty deep. Is it autobiographical, maybe? “Definitely not! (laughs) No, it’s not about me.”

Wait. So you don’t have that void like the rest of us? “No. I’ve always been alone and didn’t really care (laughs). But I have had run ins with those people – the ones that seem to always be searching.”

So you are taking the position of a bemused observer of these types of individuals? Who sort of grasp at these existential straws? “I would say bemused, but also – have been done wrong by – these people, because of their searching.”

Oh! As in how these types tend to use and exploit others in their ‘journey’ right? “You know, in the way religious people will sometimes treat people who aren’t religious and those sorts of things.”

Well, I live in Salt Lake City, so I wouldn’t know anything about that. “[laughs] You know what’s funny, is my Mom’s family were Mormon, or are Mormon I guess. My mom’s not Mormon anymore, but I know a lot about the Mormon stuff!”

Switching gears. You guys are a trio and you handle both vocals and guitars, how are you able to pull that off live? Because your music is very involved. “Yeah, it’s a tough job. So anytime I would write a new song and have to get it ready to do live, it would be, like, a month worth of practice just to get it jam ready. So it took a lot of time, but it can be done. And for the synth and stuff like that, we’re just running backing tracks – but no backing tracks for guitars.”

As a guitar player myself I want to talk about your tone a little bit. It’s very cool sounding; what kind of gear are you playing? “So the two main guitars that I used on almost all the rhythms on the album are custom Oni eight-strings. Oni is a one-man company from Australia — a guy named Daniel Memory makes them, and I’ve never played better instruments in my life. One thing that makes it interesting is I’m doing high gain P-90 pickups on one track and humbuckers on the other. You don’t hear a lot of high gain single-coil tones on most modern records. The other thing is, [Daniel Memory’s] instruments use a fretting system called E-scale. You know how multiscale instrument’s frets are fanned out? Well, these ones are curved frets. So rather than being a straight fan, the fret actually curves — and what that achieves is that it’s more like playing a regular 6-string on the top, but then the fan only really applies to those lower strings.”

So that explains why it doesn’t sound like a typical eight-string that’s just flubbing out all over the place (ie. djent). It sounds really tight. “No, there’s no flub.”

It’s great. And maybe it’s my age, because I find a lot of that eight-string stuff kind of a turn off, but your sound is just super punchy and crisp. “Well to be honest with you, I’m more of a six-string guy at heart – so I treat the eight-string like a tool. I might write most of the songs on a six-string, but then if I hear in my head that it needs to go lower I have the ability to go there.”

What’s your approach to the music industry at this point — getting into it the way it is right now? It seems like everyone is still trying to navigate technology and how it applies to the music business. “I think it’s important to be realistic about this. Was it two years, or a year ago, when Devin Townsend said he wasn’t breaking even on tour anymore? I don’t think that there’s really any money in it and I don’t think that if you’re putting a band together that you should expect there to be any money in it – ever – at any point. So, the internet is a good thing because everyone can be heard, but it’s tough because it’s so over saturated. It seems like everybody has a band, right?”

It’s as if the reason for the pros are the exact same reasons they’re cons. “Yeah, I mean to be honest we’re treating it like we’re just making music for ourselves and as long as other people enjoy it, that’s cool. But we have to be realistic too about the chances of how far it can go – we just take it as it goes. There’s no rush to get anywhere and we’re just trying to make the best music we can. For us success honestly isn’t very important – what’s important is we make music we’re happy with.”