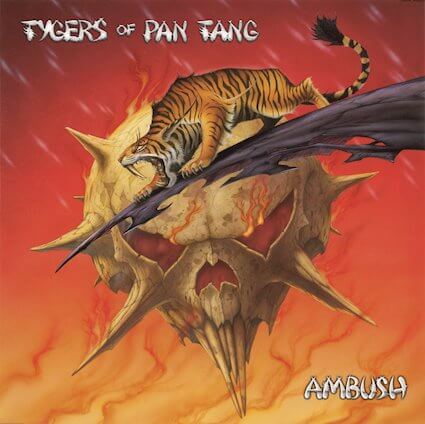 Originally released in 2012, Ambush might now be seen as the first in a run of three career redefining albums for Whitley Bay Titans Tygers of Pan Tang; Although their previous album, 2008’s Animal Instinct – the first to feature vocalist Jacopo Miele – marked the band’s recovery from the mid-career doldrums of non-starting albums such as 2004’s Noises From The Cathouse, it was Ambush, and the band’s rekindling of their relationship with mega producer Chris Tsangarides that really saw the band finding it’s creative feet and confidence again. They even managed to sleeve the album in a Rodney Matthews-painted cover, a sure sign that things were on the improve a camp Tyger…

Remastered for this 2020 reissue, the first thing to note about Ambush now is just how consistent in feel it is to it’s two successor albums, 2016’s Tygers of Pan Tang and Ritual from 2018. This is truly the sound of a band reforging it’s legacy, even if guitarist Dean Robertson was on the way out before those two later albums would be released, to be replaced by the now-also-departed Micky Crystal. The key to this is Miele, who bestrides Ambush with supreme confidence and no little class. His vocals take ostensibly good songs like She and Burning Desire to higher levels, whilst he handles the throwback rocker Hey Suzie (with it’s cheeky nod to Jess Cox-era fave Suzie Smiled) with just the right amount of respect whilst reminding the listener that it’s his mic in 2012 and no-one else’s. The thought of a ToPT album now with anyone else at the vocal helm seems almost unthinkable.

This is the Tygers we’re talking about, however, so it’s not all plain sailing – there are a few plodders mid album – but the band end on a bona fide high note with the fast-paced NWoBHM rifferama of Speed. Or at least they did on the original version of the record. Here, a couple of live numbers (Keeping Me Alive and These Eyes) a studio outtake – Cruel Hands of Time – and a demo version of Rock n’Roll Dream are thrown in by way of bonus for your delectation, making this quite a nice proposition if you had the original already, and giving you a little added incentive to add this to your collection if for some reason you’ve omitted to purchase it thus far.

The reissued/remastered version of Ambush releases on September 18th.
Read Gavin’s review of Tygers of Pan Tang HERE and his review of Ritual HERE