Tiger Army’s Nick 13: “We’re just part of the cycle of rock n’roll as it proceeded through punk and into the current day”. 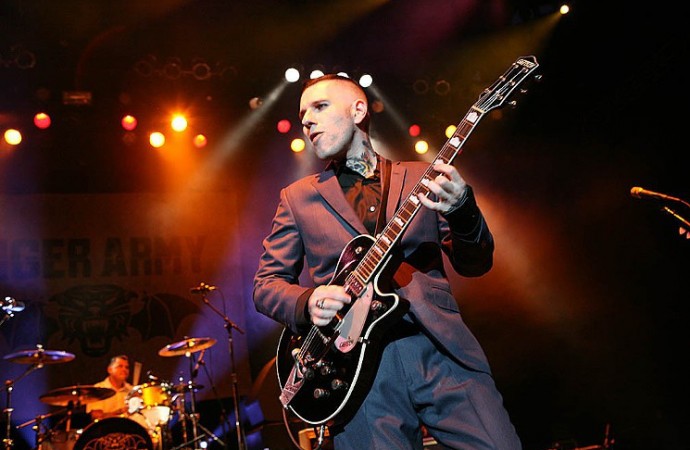 American punk/rockabilly veterans Tiger Army are heading Australia's way soon, so Scott Adams got on the blower to the band's mainstay Nick 13 to find out more...

As usual, it’s not the beginning of a Sentinel Daily interview conducted by Scott Adams without some amount of phone-related messing about; This time I’ve failed to do something which means I can hear Tiger Army frontman Nick 13 but he can’t clap ears on me – but we (or more importantly I) get it sorted and we’re off and running, keen to have a chat about the band’s brilliant recent album V, and the band’s upcoming jaunt to Australia in support of same…

Greetings Nick – thanks for taking the time to talk to us today! “Absolutely.”

The first thing I’d like to ask you, in terms of Tiger Army – there was quite a large hiatus (nine years in fact) between albums four and five in the discography, wherein you prosecuted a successful solo career. Was it hard, once you made the decision to reactivate Tiger Army, to become a band member again after being a solo artist for such a long time? “It wasn’t actually. Tiger Army had played about once a year while the band wasn’t touring and I undertook my solo work, which helped me to remain in touch with it. And then there was the fact that I was really inspired to write a new record, and to get back with Tiger Army. Which was sort of the first reason for doing the band in the first place so it was actually quite easy. It felt natural, like riding a bike”.

Indeed. You’ve been doing the band for nearly twenty years now – has the way you make a Tiger Army record changed over that time or are you very much an ‘if it ain’t broke don’t fix it’ kinda guy? “I think it evolves with each album. The situation with the studios is different, the material, who we’re working with; (last year’s) V was only the second Tiger Army album I’d made with an outside producer, the first working with Ted Hutt who did a great job but his style and approach to recording is very different than that of the late Jerry Finn, our previous producer. Of course I’ve evolved, so I think every record I a bit different for that reason”.

But you yourself would prepare as you did in 1996, in the way that you prepare yourself for the studio and the way you write the songs? “In the sense that everything is written by me before it’s shown to the band before we go into the studio – that hasn’t changed. But in some ways it can be a little looser now. I think we have the freedom to do that now. Maybe I wasn’t a good enough player, or maybe I was too caught up in wanting things to be perfect on some of the earlier records. It’s important to keep that spontaneity but also to know when it’s just right without overdoing things. So that’s something I’ve learned over the years I think. Something that maybe I had to learn, through trial and error that I maybe didn’t know on the first couple of Tiger Army albums”.

So, bearing that in mid, is it easier to write a Tiger Army album now? “Perhaps easier to record. I wouldn’t say it’s easier to write. You have to find the inspiration for that and that can be quite elusive. But it’s funny because when I found the inspiration a lot of the record was written in a couple of months. Part of that is finding ways to step away from daily life, the responsibilities of the business side of things; It’s sort of getting your mind in a different place where it’s easier for creativity to flow. In certain ways it becomes harder to write as you go along because you might have explored the themes that are central to one’s personality before and you have to find either new things or new twists on old things to say something new with the music”.

Talking of old things, when I first heard the record, Prisoner of the Night really stood out (it’s still my favourite track on the album) because of it’s real Del Shannon feel, especially in the piano riff that’s played on the track. But how does a young man growing up in the eighties and nineties find Del Shannon? Was that something your parents listened to? How do you put together those sort of influences into a Tiger Army record? “You know, early rock n’roll, from the late fifties and even the early sixties was definitely something I was exposed to through my dad. He was a Del Shannon fan, Dion, Roy Orbison, Buddy Holly – these are some of my favourite artists and I heard about them through him. But then I think there’s the fact that I was always also drawn to early punk that also has those influences in it; I’ve recently been reading about the early punk scene in different books. Early rock n’roll was a central source of inspiration for a lot of those people – even if you take a band like Suicide, who were playing synthesizers – a lot of their melodies were early rock n’roll melodies and the same can be said for The Ramones, The Cramps, the New York Dolls, It was sort of an amped up version. And I think that’s always been a part of Tiger Army’s thing. We’re just part of the cycle of rock n’roll as it proceeded through punk and into the current day”.

The other side of the album is the psychobilly, rockabilly-style material like Firefall; At heart, are you a balladeer or a rocker, in essence? “(laughs) That’s a good question! I would say a bit of both, and I would point to certain individuals from the past like Buddy Holly or Roy Orbison who I think did both very effectively. So I’d say I couldn’t pick one or the other side – they are both very important to me”.

Now of course the reason you’re speaking to Sentinel Daily today isn’t to talk about V, interesting though that subject undoubtedly is, but because you’re touring Australia soon! You haven’t been down here for a while, have you? “That’s right. 2008 was our last tour of Australia”.

Any nice memories of that trip? Or any of your sojourns down under? “Both times we’ve been to Australia we had a great time. My mum is English, so I think I relate to the English side of Australian culture. Many people say that Australia is like a combination of England and California, which are both places I love. I feel very much at home there. The scenery, the ocean, the people are great, they love their music… It’s definitely one of my favourite places to tour”.

Excellent! What about touring generally? I speak to a lot of musicians as I go about my business and most of them say they’ve formulated procedures to make the grind more bearable as they get a bit older. Are you any different? Do you still enjoy it a s much as you used to? “No, I still enjoy it, but there was a time when Tiger Army stopped touring in 2008 when we hadn’t stopped for a couple of years… actually we hadn’t stopped for eight years at the point, we just hadn’t taken a break… except to write and record; there’s no question that I was a bit over it at that time. But having a chance to step away from it… all the things you miss – it’s really nice to get back to it. We spent all of 2016 on the road an it’s been great for me. I do this because I love it, I don’t do it because I have to. It’s something I really enjoy and I think I’ll always do it”.

That’s good to hear! It’s nice that you don’t feel at all jaded by the whole process. What sort of set list should we expect when you come to Australia? Mainly from V or a good selection from across the albums? “I would say it will be a selection of everything. There’s no question we’ll be playing songs from the new album but our sets usually represent most if not all of our releases”.

And with that our time is at an end – If you can, try and get out and see one of America’s great modern rock n’roll bands in action when they come to Australia this February – you surely won’t regret it.