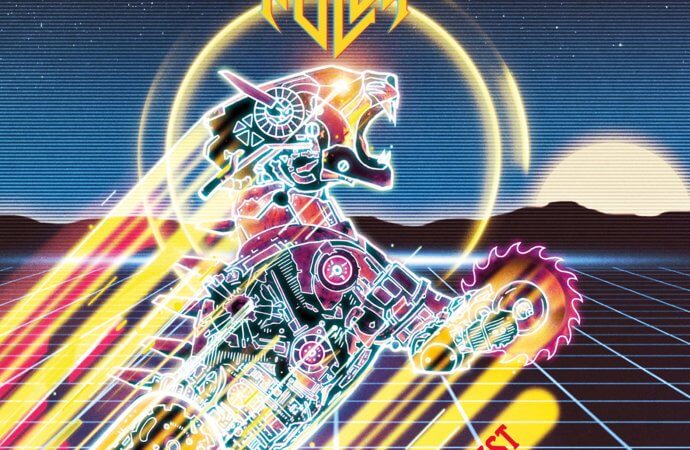 Some of you will recognize the name Thobbe Englund from the man’s days with Swedish history buffs Sabaton; I’m not a fan of those guys, per se, so he’s a bit of a new name to me… Anyways, what we have here from Mr Englund is a personal tribute to the glory that is Judas Priest. A dozen songs (including a couple from Rob Halford’s solo activities in Fight), lovingly put together, celebrating the days when Thobbe Jnr would ‘listen to albums like British Steel and Defenders of the Faith every night in bed with his cassette recorder’…

I did the same thing, and I’m sure you did too, and this is undoubtedly a sincerely put together set of JP covers. Even if there are no songs from British Steel! And even though it’s a scientifically-proven impossibility to improve on the originals, Englund does bring vitality and spark to the project. Opening with The Sentinel is an ambitious, if doomed, idea; Understandably Thobbe fares better on some of the more obscure, less obviously ‘classic’ songs offered up. Immortal Sin, for instance, was a pretty generic piece of grunge-flavoured metal first time around on the debut Fight album, and here Englund absolutely owns the song with some great guitar playing. In similar terms, Burn In Hell, from Jugulator, is delivered with such confidence that you sense it’s very much in Englund’s wheelhouse as a songwriter/performer. I’m sure it wasn’t his intention to better the originals in any way – but he comes close here without doubt!

Reckless, from Turbo, is a surprise choice and is performed with spirit and a smile, but the biggest surprise and success is Englund’s perspective on Blood Red Skies; Again, a song that deviates slightly from the usual Priest template would, in principal, offer a little more room for movement for the musician doing the cover. But Thobbe stays as close to the original as budget would probably allow, in the process delivering a version that manages to be both faithful and fresh.

If you are a Priest die-hard like me this is nothing more than a curiosity, although it’s very well played and constructed; it’s always interesting to trade ideas with other Priest fans from around the Globe; it’s not often they are as obviously talented as Thobbe Englund, but this remains a personal tribute. If Priest are just a footnote in your metal encyclopaedia, this release will probably be best left on the shelves.

Hail To The Priest is out now.