The Seven Ages of Metal: Märvel 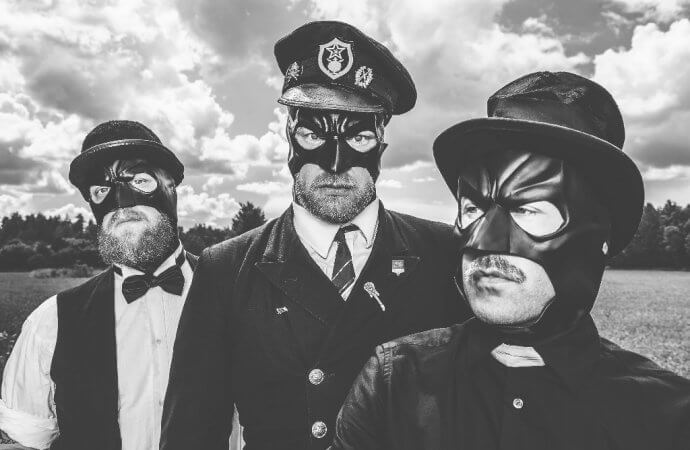 Greetings! Welcome along to Sentinel Daily and many thanks for joining us with your contributions to our Seven Ages of Metal series! Before we kick off – for the benefit of our readers, please identify yourself and tell us what you do in Märvel … “Fellow rockers, this is your friendly neighbourhood Küng speaking! Handling guitars and vocal duties in the band formerly (and currently) known as Märvel”.

It’s great to have you on board… Here you are then – entering the world of metal, probably in your early teens, mewling about the unfairness of it all and puking on cheap white cider… Which band was your introduction to metal? How did you find out about them? And which bands generally do you think make the best ‘entry level’ metal music? “The first heavy groups that grabbed my attention were Kiss, Twisted Sister, W.A.S.P., Dio, Iron Maiden, Mötley Crüe, et cetera. Like most people at that time I got introduced by friends, cassette trading and through the Swedish music magazine OKEJ. Whatever grabs your attention and makes you interested in music is a good enough introduction in my book”.

You’re in! The magical and bewildering world of metal lies at your feet… you’ve assembled a small collection of records and tapes – or CDs of course, if you’re a youngster – but you’re still very much a School Child, whining because the olds won’t let you go to a gig – until the scales fall from their eyes – and you’ve got the Golden ticket in your sweaty little palm! Who were the first band you saw in the live arena? Did it confirm your suspicions about just how massive this hidden world was, how inspiring? Or was first ‘in the flesh’ contact a little disappointing? “The first live band I saw was Herreys – an awesome swedish metal power trio. As far as I can remember, they played all their hits so I was probably satisfied”.

Marvellous! And you’re now a full-grown acolyte, a fully-fledged lover of the dark arts, as it were. But listening and watching isn’t enough. You need to consummate your love, by forming or joining your own metal band – tell us about your formative bands and what life was like on the bottom rung of the ladder… “I was a musical lone wolf in my formative years – I dreamt of being in a band but that didn’t happen until much later. I was a late rock ’n’ roll bloomer!”

Better late than never, of course, so let’s jump forward through those solitary years… Mission accomplished – you’re in a band. A Soldier of metal mired in the trenches fighting for our way of life, possibly on a tour of the toilet venues of your home locale – what was your first tour like? What valuable lessons were learned? Or was there just to much fun to be had to worry about tedious life craft? “Märvel’s first tour was a trip to the Baltic states and it was a disaster from start to end. Arriving at the ferry terminal, the tour managers had forgotten the necessary papers for the van so it wasn’t allowed on board. So we had to run and carry all of the back line onto the ferry by hand… a great start! The next day, the first gig in Tallin was witnessed by the bar personnel and the other band we toured with”.

Well we’ve all been there… and for you at least things only got better from there! But away from you now – your career is in full bloom. What, then, of the elder Statesmen, the justices who still reign, Saturnine and all-knowing? Which of the old-but-still-living Gods still command the most respect in your eyes? And why? “Iron Maiden, still delivering the goods live! They manage their legacy elegantly while they’re still putting out new music”.

True enough! And what about those who’ve maybe pushed it a little too far, those bespectacled and pantalooned ‘legacy’ artistes on their nth farewell trip across the globe? Is there anyone on our world you think might like to think about hanging up the old Les Paul and giving themselves and us a rest? “Too many to mention… The audience is growing old along with their old favourite bands. I don’t think old timers should be blamed for occupying the stage in favour of younger bands. They have deserved to keep doing what they do and as long as people are paying to see them, blame the audience! Sadly, for the normal Svenne Banan (Swedish for “average Joe”), rock and metal is a nostalgic thing”.

And the final age, of course, is death. We’ll all be left Sans teeth, sans eyes, sans taste, sans everything eventually. Which deceased metallian do you miss most? And what are your happiest memories of them? “Dio! What a monster voice! As a kid, I remember copying the dragon from the Sacred Heart album cover onto a large bed sheet. Happy memories of when my life long devotion to metal was forged”.

A great way to end our little chat! thanks for taking part!