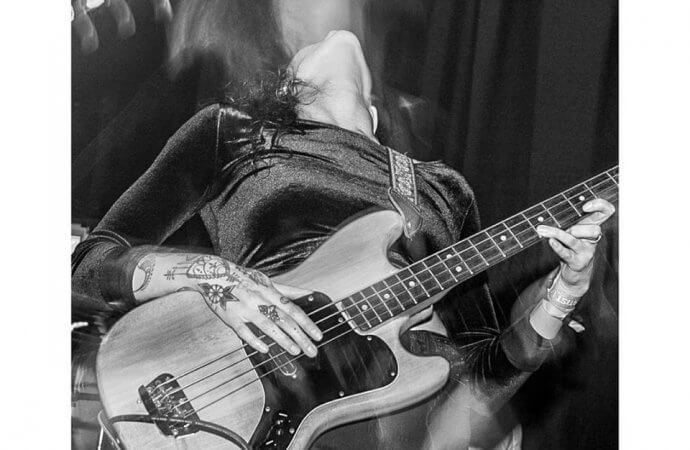 In the latest in our Seven Ages of Metal series, Scott Adams talks to Blackwater Holylight vocalist/bassist Sunny Faris...

Hello, Sunny – thanks for taking part on behalf of your excellent band Blackwater Holylight in our Seven Ages of Metal series…Here you are then – entering the world of metal, probably in your early teens, mewling about the unfairness of it all and puking on cheap white cider… Which band was your introduction to metal? How did you find out about them? And which bands generally do you think make the best ‘entry level’ metal music? “Oh god I listened to terrible music in high school. A lot of mallcore/screamo/emo music. I guess in a small way it was an introduction to metal because it was “alternative” but none of it is anything I wanna admit to now. In my late teens/early twenties I listened to a lot of old hip hop and psych. I pretty much stuck to psych, post rock and some ambient stuff for a handful of years. Wu-Tang, The Pharcyde, A Tribe Called Quest, Spiritualized, Galaxie 500, Brian Jonestown Massacre, Black Sabbath, My Bloody Valentine, Yo La Tengo… stuff like that. I really didn’t start getting into doom until about 2015/2016, right around when BWHL was being birthed. I started listening to Monolord, Acid King, Electric Wizard, Sleep… so I guess these bands were my introduction to all that I listen to now which encompass many realms of metal. But I’ve always had a pretty eclectic musical catalogue, which goes for everyone in the band. We’re all over the place”.

All over the place can be good – especially in the collective atmosphere of a band! So now you’re in! Welcome to the Second Age! The magical and bewildering world of metal lies at your feet… you’ve assembled a small collection of records and tapes – or CDs of course, if you’re a youngster – but you’re still very much a School child, whining because the olds won’t let you go to a gig – until the scales fall from their eyes – and you’ve got the Golden ticket in your sweaty little palm! Who were the first band you saw in the live arena? Did it confirm your suspicions about just how massive this hidden world was, how inspiring? Or was first ‘in the flesh’ contact a little disappointing? “Damn it’s hard to remember what my first heavy show was… I’ve been going to shows since I was like fourteen or something and have always loved watching live music, and always been super inspired by live performance no matter the genre. Honestly I’ve had a spot in my heart for performance in general, especially dance. I think I’ve always recognised the vulnerability and bravery it takes to express yourself on stage and it’s been super intriguing to me ever since I was a kid”.

You’re now a full-grown acolyte, a fully-fledged lover of the dark arts, as it were. But listening and watching isn’t enough. You need to consummate your love, by forming or joining your own metal band – tell us about your formative bands and what life was like on the bottom rung of the ladder… “All five of us have been in and out of multiple kinds of bands over the last handful of years. We’ve really covered a lot of genres collectively with all the projects we’ve been a part of. None of us would be here in BWHL if it weren’t for any of those bands though, of course. We all learned a lot about what it takes to be in a band, rehearse, tour, get along with each other… all of it was practice for this in a way. When BWHL started none of us ever said “let’s start a metal band”. We wanted it to be honest and vulnerable which for us was inherently heavy, so it all formed fairly naturally. Still forming Forever forming”.

So that’s mission accomplished – you’re in a band and into the Fourth Age… A Soldier of metal mired in the trenches fighting for our way of life, possibly on a tour of the toilet venues of your home locale – what was your first tour like? What valuable lessons were learned? Or was there just to much fun to be had to worry about tedious life craft? “Our first tour was a blast! It was with our friends in a band called Weeed and we went down and up the west coast where we live. It was definitely a very blissed out tour because we were all so in love with each other, the road and music. A super magical time for sure. I’m sure we learned some very valuable teachings on the tour, I think everyday there is some kind of lesson and learning that comes along with this so it’s pretty inevitable”.

Away from you now – your career is in full bloom with the imminent release of a superb new album… But what of the elder Statesmen, the justices who still reign, Saturnine and all-knowing? Which of the old-but-still-living Gods still command the most respect in your eyes? And why? “I’m not sure if it’s commanding respect as much as it is just always having love for some of the first heavy bands I listened to, purely for dedication and nostalgia. But if you’re asking for one band that I will always love and respect and never get sick of I gotta say our buddies in Thou. That band changed my musical perspective and attitude in a lot of ways and I just hold them so dearly”.

And what about those who’ve maybe pushed it a little too far, those bespectacled and pantalooned ‘legacy’ artistes on their nth farewell trip across the globe? Is there anyone on our world you think might like to think about hanging up the old Les Paul and giving themselves and us a rest? “Honestly not really… I think everyone should do this for as long as they possibly can without putting themselves or someone else in danger. So if those things aren’t happening and people are still going out to your shows I say keep going so long as the fire ignites”.

And the final age, of course, is death. We’ll all be left Sans teeth, sans eyes, sans taste, sans everything eventually. Which deceased metallian do you miss most? And what are your happiest memories of them? “Well that’s a given, if Black Sabbath could put out albums until the end of time I think we’d all be just fine with that. They were an introduction to metal and smoking weed to me, a beautiful adolescent memory indeed. Naïve and innocent, nurtured by riffs and my best friends basement”.