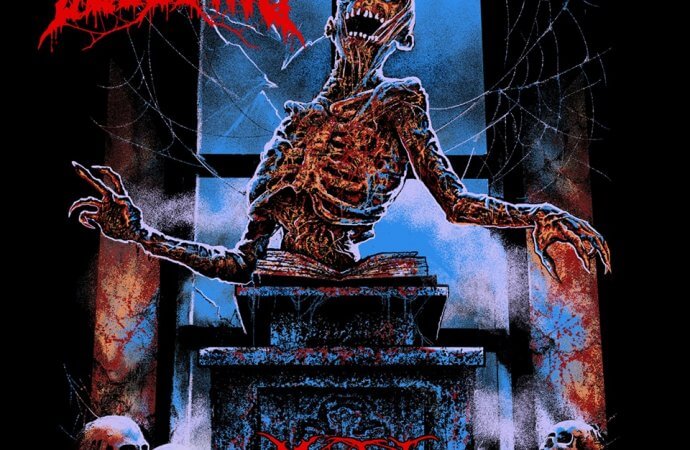 Despite being the very epitome of old school, there’s something very fresh about Morbid Prophecy, the new album from London-based thrashers The Bleeding. Produced to an insanely high standard for a band at this level by Gaz Twist, Morbid Prophecy is an object lesson in death/thrash done right.

Opening track Demonic Oath flays the first layer of skin from your face in short order in a maelstrom machine gun battery of Hell Awaits riffage and Mille Petrozza throat warfare, and the pain doesn’t let up from that moment.

Bassist Sean Richardson gets in on the act in second track – the aptly-named Maelstrom – playing some searing runs in support of guitarist Tasos Tzimorotas, whilst third track Entering the Pandemonium adds a weird, loping melody to proceedings that knocks the listener a bit sideways on first contact. Repeated listens confirm that it’s actually a nice little trick which fits the tune well, and it’s here that you get the first sense of that freshness I mentioned earlier. The Bleeding could easily play this safe, and release a straight up slab of comfortable death/thrash to general approbation, but they are clearly not averse to taking the odd risk or two to keep things from getting too samey. It’s a decision that pays off time and again throughout the album.

The title track features some blast furnace vocalising from Germ, and some truly thunderous percussive viciousness courtesy of James Loh, and it’s ‘spoken word’ interval just before the solo is another little nicely-thought out cameo to look out for. Storm of the Hellspawn is up next, and is perhaps the least interesting track on offer, notwithstanding the fact that the track features probably Tzimoratas’ best lead work on the record, but it’s still far from a stinker. The Bleeding are operating here at a level that simply wouldn’t allow any filler at all.

The final triumvirate of tracks do nothing further to dampen the listeners’ ardour, however; the grinding coruscation of Sadistic Saviour is another highlight, featuring a truly hellish vocal from Germ (almost veering into Cirith Ungol territory in places!) and riffwork plucked straight from the mid eighties; If I had to pick out a highlight this would be it. A nice change in pace follows via the gently played instrumental Repentance before The Bleeding seal the deal with closer Hammer of Penance, another lesson in violence steeped in battering percussion, axes tortured to the verge of breakdown and death from above vocalising in equal measure. This is the stuff!

Morbid Prophecy is out now.