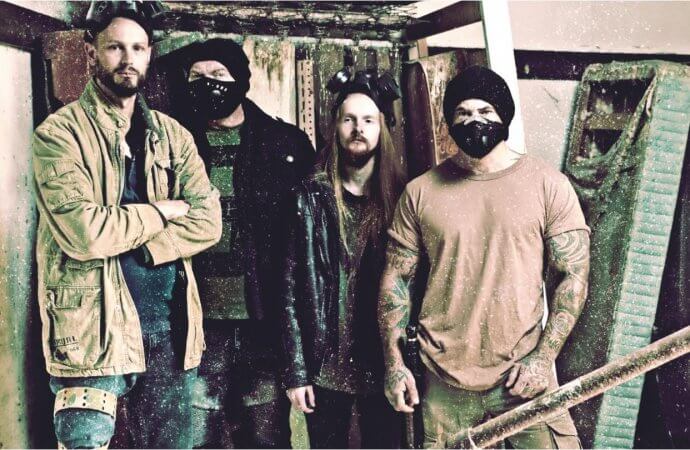 It has been three years since the Australian quartet’s debut album Alliance of Thieves dropped, an album which married dark undertones, heavy grooves and sophistication whilst retaining old-school metal values. Upon its release Sentinel Daily‘s Scott Adams was moved to remark ‘I have seen the future of thrash metal… Absolutely tremendous and absolutely recommended if classy, and classic, thrash and metal is something that sets your pulse racing’. The album was placed at Number 4 in Sentinel Daily’s Top 100 Albums of 2016, the highest placing for any Australian artist that year.

So, it’s no surprise then, that the band are back to continue the story and have a new member and renewed energy. Formed in Melbourne, by 4ARM’s Danny Camilleri and Teramaze’s Dean Wells with bassist Andrew Cameron, they have recruited drummer David Godfrey who replaces Jon Dette, following his departure due to logistical reasons with him being based in the US and the rest of the band in Australia.

Mask Of All Misery – the new record – is an album that journey’s through a maze of toxic influences and the masks the exponents wear. “The album deals with a lot of personal reflection and issues as well as attacking or addressing much broader issues concerning perhaps the ignorance of society in regards to what’s going on around us all,” explains Camilleri.

The album walks through a number of tough subject matters and it’s something the band refuse to shy away from. The opening song, the instrumental Miasma sets the scene and tone for what you are about to expect. Miasma comes from the ancient Greek word for “pollution” and the miasma theory was a theory that held diseases such as cholera, chlamydia or the Black Death were caused by a noxious form of “bad air” or “miasma.” “It’s a theory that has been around for many years,” elaborates Camilleri. “ It’s about how the air we breathe is being poisoned intentionally, and we are all subjected to it. There is no greater good in regards to any government or authority. Especially when they are responsible for the deployment of systematically spraying chemicals and spreading airborne diseases in the very air we breathe.”

The title track was the first song written for the album and is based on responding to toxic situations or people, identifying their behaviours and the rationalisation in response to their thought process, projections and intentions. Because “they” wear the mask, it doesn’t mean you have to too. Bury The Bodies continues to delve into the sense of being trapped with personal demons and solitude in your own thoughts. “It’s the war we feel inside. Some of us chose to engage in that war and better ourselves and find our truth through it and some of us chose to pretend it doesn’t exist,” says the singer.

City Of Ghosts, Face of Stone and In The Final Hour run full force through heavy metal riffery with anthemic muscle. Doves deals with showing great resilience and strength in the face of hopelessness, whilst they tackle dark subject matter on Adrena. The song takes its name from the word “Adrenochrome,”which has been found to occur naturally in human blood. Theories suggest that it is used as a drug for the “elites” and that it is harvested through the experience of terrifying individuals, mostly children to the brink of fear and extracting their blood to give the “elites” an adrenaline high, at the expense of missing or lost children. Adrenochrome, it has been suggested was also used by the CIA during Project MKUltra and during secret Cold War experiments.

The album closes with the seven minute and twenty one second epic Godless, another personal song dealing with manipulation and severing the ties between an empath and narcissist to take back control back of your life.

The album barely takes a breath through the ten songs and deals with personal struggles and the inner-strength to pull yourself through as well as burrowing into the dark underbelly for an album of uncompromising heaviness. However, the band have an ability to sprinkle light, adding visions of hope lyrically and strong sense of melody throughout the unrelenting power and musicianship of the four members.

The album was recorded and produced by Dean Wells at his Wells Productions studio in Melbourne with the songwriting partnership of Camilleri and Wells. Talking about the recording process Camilleri says “We generally have an idea of how many songs we want for an album, we aren’t the kind of band that writes twenty tracks and picks the best nine or ten to go on the album, if something doesn’t grab us early we tend to just throw it in the bin and work on something that does! We demo every track to almost album quality before even looking at officially beginning recording, then we’ll sit on it a bit and let it digest.”

Expanding on how the writing relationship works he explains, “We don’t designate or anything like that, either Dean will come up with something cool or I will, we’ll work on it from that point until it evolves into what we envisioned in our head, though a lot of the time the song will take on a completely different face than when we first began work on it, but that’s one of the most enjoyable parts about the writing process with Meshiaak. We never stop pushing the boundaries for ourselves and seeing where we can take something. I love the creative part of it all.”

With a record you can put it on and hear it, feel it even. But sometimes you really need to listen, take it in as a whole, process and think about it. Mask Of All Misery is one of those albums. “People will take what they chose to at the end of the day,” ponders Camilleri. “But, I’ve found by talking with a lot of fans that they do pay attention and really digest the content of our music. It’s an amazing feeling when someone connects to it through hearing it and then gets even deeper because they can connect with the content as well.. goes to show you that you are never alone.”

Mask of All Misery is out on November 15th.