Syteria’s Jackie Chambers: “I’ve loved every show that I’ve been able to play this year”… 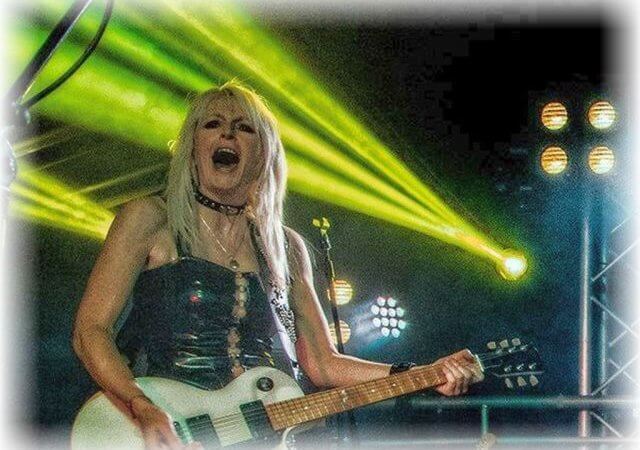 It's been a busy year for Jackie Chambers, with the promise of more of the same in 2018...

Hello and welcome to Sentinel Daily! Please tell us a little bit about yourself by way of introduction. “Hi I’m Jackie ‘Jax’ Chmabers and I play lead guitar and sing backing vocals for Syteria and Girlschool“.

Thank you. First question: What was the best album you bought this year? “I have the Alice Cooper Paranormal CD, every Alice Cooper album is always worth buying and don’t think there’s one I don’t have, I’ve been following him since I was at school…and that is a very long time ago now!”

The man is nearly seventy and still delivering both live and in the studio. Quite remarkable! And what was the highlight for you personally in the last year? “I’ve loved every show that I’ve been able to play this year, but one stood out as my favourite and that was the headline show we played at the Brudenel Club in Leeds, which is my home town. I think it stood out because it was a milestone, our first Syteria gig was played there just a year before this gig and we were supporting back then. There were a few familiar faces in the audience and I could feel how far as band we had come in that first year together. We’ve played some great new and upcoming festivals too this year which will be huge in the future I’m sure… such as Winterstorm and Wildfire in Scotland”.

And what about lowlights? Who stunk the place out musically in 2017? “Lowlights were at the gigs that we had technical difficulties on stage at. It happens and can ruin a gig for us but we play on and still try to give our all and enjoy it. As for bands that stunk, even if I had seen a band I didn’t enjoy, I would never say, each to their own and all that”.

I can’t believe how diplomatic most of our guests have been with that question this year! Probably for the best, I guess! Moving on, what have you found disappointing about the wider world in 2017? “So many things, where do I start? I can’t even begin to start with world politics, it’s almost a joke now who is in charge of such power, great for comedians world wide though I guess. I’m disappointed that mankind can’t take responsibility for it’s actions against this beautiful planet, we’re all in the same boat, one sinks, we all go down, so why can’t we stop, look at what we’re all doing and change before it’s too late…though I fear it probably is too late already”.

What’s on the cards for you and your bands in 2018? “I’m hoping 2018 is going to be the busiest year ever for me musically. Already we have gigs in place for Syteria in Thailand and the Silja Cruise from Stockholm to Helsinki in April, a few more shows including Legends of Rock in Great Yarmouth, also in between and I head to music trade show NAMM in January to join the Total Rock team there to do some interviews with them. Of course it’s also Girlschool’s fortieth anniversary next year, so I will have a few shows with the girls for sure to celebrate that event, including Winterstorm in November”.

Busy busy! Which is good, because, as Morrissey tells us, the Devil will make work for idle hands to do… We’re coming up to the party season – what’s the better night – Christmas Eve or New Years Eve? And what will you be drinking? “Oh, that would have to be New Years Eve every time. That night is always filled with an air of excitement at the chance and hope of a fresh start for the year to come, all making plans, resolutions and of course catching up with friends to see that new year in! Christmas Eve is always a little tense, have I remembered to do this and that, will there be any family trouble on Christmas Day, hope they like the present, all of that sort of thing but New Year is about letting go of what has been and preparing for the next era…world domination for us then! I’ll be drinking a nice Ginger Ale as I quit alcohol three years ago on New Year’s Eve itself”.

Congratulations on your ongoing sobriety! Back to music. What’s the first thing that springs to mind when I say ‘Australian Metal’? “That has to be AC/DC every time, although then there’s Rose Tattoo, Wolfmother and Pendulum and.. I’m sure there are dozens more”.

There surely are! We’ve just started up with Sentinel Daily Radio – what five songs should every metal radio station have on it’s playlist? “Oh, a good question, it’s hard to pick five bands let alone five songs… if I were trying to get someone who isn’t into rock five ‘go-to’ songs to get them started then I’d say: Ace of Spades by Motörhead, Number of the Beast by Iron Maiden, Paranoid by Black Sabbath, Highway to Hell by AC/DC and finally Schools Out by Alice Cooper”.

Very nice. Thank you! Anything else you’d like to say to the readers of Sentinel Daily? “Keep rocking and have a fab Christmas and New Year. Also, Check out Rantobot by Syteria – There’s a touch of old and new rock in there, something for everyone.. see you out there next year sometime!”

Thanks for taking part!