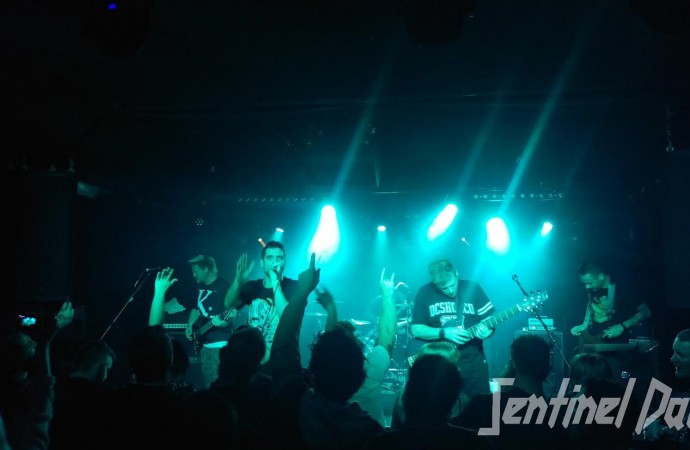 Superheist are back baby, but Don't Call it a Comeback!Paul Kerr

Paul Kerr sees a revitalised Superheist roll back the years in Canberra...

So this reviewer has to put his hand up and plead slackness.  I didn’t do enough research into my last article where I missed that Canberra, of all places, was going to host the return of the mighty Superheist after 13 years at Metal Fiesta 11 – Halloween Spectacular.

So after getting over that poor form I was able to procure a chance in to witness the first gig on the newly reborn Superheist, alongside a group of other Australian metal bands who’d made the trip to Canberra.  I made it to the gig a bit late and missed a couple of bands, so once there I grabbed a beer and parked myself up near the back for a while.  The Basement has about 80-100 or so punters at this stage, all around the place – a few playing pool, a few out back and there are quite a few dressed up for the Halloween Party theme.

The first band I get to see is Na Maza, who put on a decent set with high energy and get the smallish crowd watching involved.  Unfortunately I missed the Horrorwood Mannequins set on the second stage at this time. Next up is Segression, a band that has been around the traps for around 20 years.  They are tight, up tempo, and drive the crowd into a frenzy, playing a special track for a crowd member that has followed them a long way to see them.  The crowd member wearing an evil looking jester suit and face painted in black, joins the band on stage adding backing vocals to the song.  Segression finish up their very good set with a very enthusiastic ovation from the crowd that has been building up.  This time I get into the second stage and get to see Envenomed.  They play a good set of their own tracks, encouraging greater audience participation as they have driven 7 hours to be here, which they do once Envenomed start on a cover of Metallica’s Creeping Death.

Finally it is time for Superheist.  The crowd has built up with anticipation and the floor is much more packed as Superheist hit the stage to a very appreciative and quite noisy crowd.  The band sound great from the outset, driven along by a tight rhythm section of new drummer Benny Clark and original bass player, Drew Dedmen who have formed quite a partnership already.  Richie dw Norton looks relaxed and brings the hooks and riffs that Superheist are so well known for, which only leaves Ezekiel Ox, who swaggers across the stage like he owns it and inside the first song he completely owns the crowd.  With this, the new instalment of Superheist is ushered in, but “Don’t Call it a Comeback!”

Ezekiel Ox is a very charismatic front man, delivering beautifully on the vocal front and building up a great rapport with the crowd, even the guys playing pool up the back still.  He is able to deliver a great mix of clean vocals, speed raps and loud screams with ease while bouncing around the stage and at times out with the punters on the floor.  One of the stronger crowd members picks Ox up on his shoulders and runs him around the floor, offering to do it again at a later stage of the set at which point Ox cries off citing a bit of a squashed left testicle from his last carry.  His delivery of the material is brilliant, each new song sounding like the vocals had been lifted off the CD and all new songs go down a treat which is great as Ghosts of the Social Dead has just been released that day.  He is right on point for the older material too, based on the crowd’s reaction, though at one point he apologises for messing up and leading the crowd in a chant of “Zeke Fucked Up”.

The rest of the band looked very much at ease up there and you can see they are just loving being back and feeding off the energy of the crowd bouncing back at them.  They certainly are making the punters night.  They play for a bit over an hour and roll through a good number of tracks off the new album (Fearing Nothing, Wolves in Your Headspace, Back to Base, Running Away, Sweat Swing + more) and some oldies such as Pulse, Two Faced, Fight Back and Crank The System. One of the highlights for the night was when crowd to start singing the backing “Whoa Oh Oh” on Fearing Nothing which just kept being sang back to them even after the song finished and you can see on the band’s faces how good it feels.

Superheist are back baby and it feels so, soooo good.

I see Ezekiel Ox at the merchandise stand afterwards as I’m grabbing a tour shirt which he signs for me and he states it’s great to be back.  But then he reflects and says it’s funny to be saying that as he is only just new and just beginning with them.  He asks if I enjoyed the gig and I say yes.  He then asks for me to spread the word with my friends.  So that is what I am hoping to do here – get out and see these guys, you won’t be disappointed as they are an amazing band live and have all the right ingredients to be huge.  I certainly can’t wait for them to hit Canberra again, as I’ll be back.

Superheist are playing the following dates on the Don’t Call it a Comeback tour: