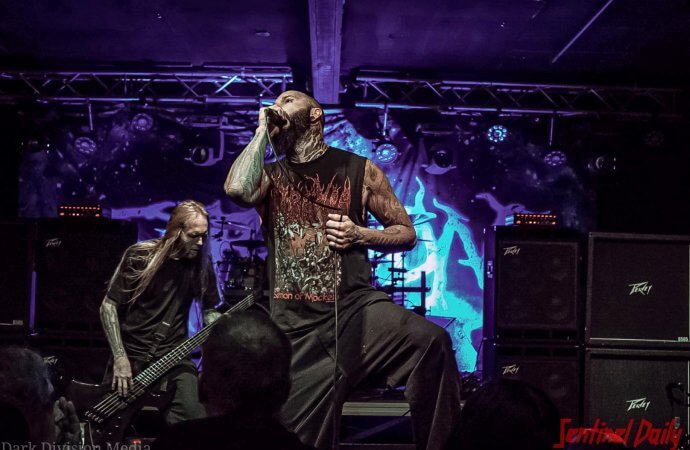 Salt Lake City becomes a ghost town after 9:00 p.m. on a Sunday night, but on November 10, a small crowd of die-hard metalheads congregated at The Soundwell to witness some top tier metal.

Setting the pace for the night was Necronomicon – no, the other one. Necronomicon hails from Montreal and are touring behind their brilliant 2019 release Unus (Season of Mist). There were some minor technical issues with guitars in the beginning, but guitarist/vocalist Rob “The Witch” Tremblay handled them like a pro, an evil evil pro. Necronomicon made the most of it, delivering a short set of powerful, symphonic death metal.

Following Necrononimon was reactivated technical deathcore band Abiotic from Florida. They tapped, sweep picked, and possibly crab-walked their way through a very aggressive, yet fun set. They brought a good natured energy while still providing plenty of ear-lacerating riffs. While it’s been four years since their last release Casuistry (Metal Blade), they recently dropped a new single entitled Emerald. That, along with getting on this tour, should hopefully give them some much needed momentum after their recent hiatus.

Things got dark after Abiotic – very dark. Austria’s Belphegor took to the stage amid inverted crosses, smoke, and bone sculpture mic stands. Guitarist/vocalist Helmuth Lehner glared at the crowd, forcing all in attendance to participate in dark incantations designed to summon all kinds of ancient, evil entities. Flanking Lehner on each side were bassist Serpenth along with touring guitarist Ricardo “Horus” Falcon, both making it clear they were willing to do horrible things on Lehner’s behalf should we resist giving up our souls. The highlight of their set was when they slowed things down and played their love song Lucifer Incestus, the title track from 2003’s Lucifer Incestus (Napalm Records), for the couples in attendance. Belphegor is said to be working on new material for a 2020 release via Nuclear Blast.

Closing out the night were none other than New York legends Suffocation. It’s hard to come up with the appropriate words to describe what it’s like to witness them. These guys have been at it for close to thirty years and they devastated the small crowd as if they were playing Wacken. While his iconic dreadlocked hair is thinning, guitarist Terrence Hobbs still rips with the hunger of someone half his age and bassist Derek Boyer still has people saying out loud in between songs, “How the hell does he play like that!?”

Although many mourn the retirement of vocalist Frank Mullin, touring vocalist and now permanent member (I believe), Ricky Myers of California’s Disgorge, sets those minds at ease with an absolutely ferocious delivery. With a set covering all the classics from their entire eight album catalogue, Suffocation was the satisfying final nail hammered into an invigorating evening of darkness and brutality. 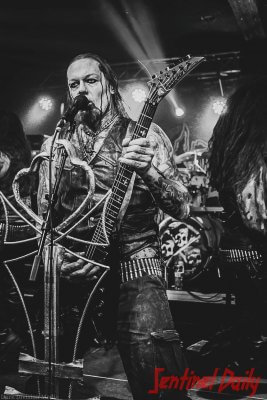 There’s still time to catch this coruscating package as The Restless Onslaught US tour continues with this final batch of dates: