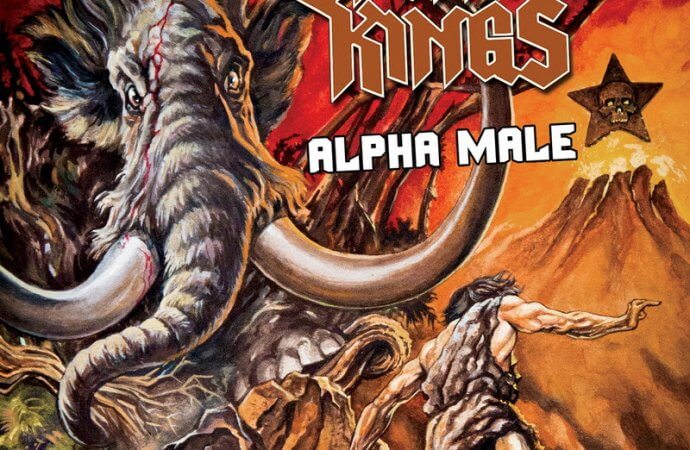 Scandinavian rockers Stoner Kings formed a fair while ago – around the year 2000, if my sources are correct – coalescing around professional wrestler Michael ‘Starbuck’ Majalahti, which I guess makes them the Finnish Fozzy if you’’re looking for an easy comparison…

… Except there are no Abba covers here or any other of the vaguely desperate ploys used by the eminently more visible Chris Jericho to gain mass approbation. Stoner Kings are actually a pretty impressive unit, with guitarist Joonas Vepsä in particular acquitting himself well over the course of the eleven meaty tracks featured on Alpha Male. His solo on Damnation’s Own in particular steals the show, but his compact riffing is the canvas over which Majalahti projects himself on every track.

Don’t be overly misled by the ‘stoner’ connotations of the band’s moniker; Musically the band present as a pretty straight-up-and-down melodic metal outfit (not too far removed from Fozzy’s original raison d’être, actually…), and their ear for a melodic chorus makes then a far more interesting proposition than your usual, downtuned sweet leaf-loving misery outlet. Green Machine is more like modern day Warrior Soul than classic Kyuss, for instance, with a gritty, grinding riff powering an uptempo blast that Majalahti adds his broken croon to with nice results.

The excellent Cro-Magnon is probably the best track here; Harnessing a little Danzig to the usual mix of solid thud metal and using some nice gang vocals the band create a fantastic whirlwind of primal metal fun n’games – I defy anyone listening not to get involved with this one. If Lordi recorded this, it’d be a hit, so let’s hope that the song gets the recognition it so definitely deserves…

Some funky Hammond organ augments the album’s epic, Demon Cloak, which harks back to Uriah Heep and their tales of magician’s birthdays and rainbow demons, and Vepsä once again makes sure the metal quotas are filled with some nice, jagged rhythm playing.

The band appears on an anti-PC ticket, which might upset those of a more fragile disposition, but there really aren’t any occasions on the record where the message appears to outweigh the music. In fact, for the most part Stoner Kings appear to be happy to let their axes do the talking, and for that reason alone this is one of the most listenable slabs of pure HM I’ve come across in a fair while. Fans of anyone from Grand Magus to Danko Jones are gonna lap this up. Get involved!

Alpha Male is out now.