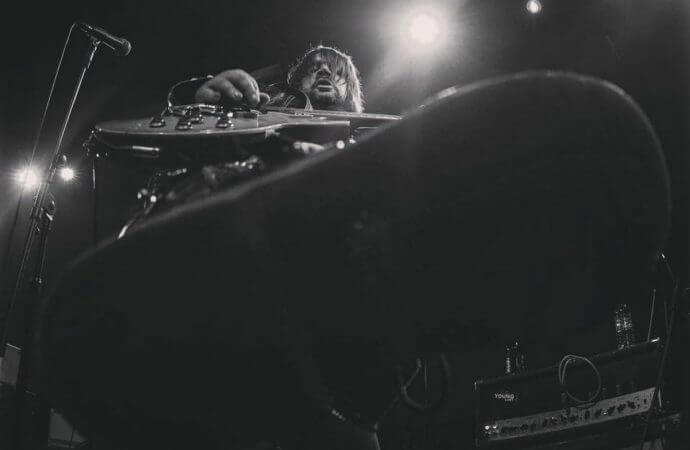 Sentinel Daily catches up with rock n'roll lifer Stevie R Pearce as he prepares for the release of a new album...

Brit rocker Stevie R. Pearce has been a favourite around the Sentinel Daily office since the release of his last self-titled album, which emerged a couple of years back. The strains of Nobody Loves You are still regularly heard over the airwaves on Sentinel Daily Radio, and the news of new music on the horizon from Mr Pearce caused hearts to flutter in every part of our Suburban Canberra-based bunker. A chance to chew the fat over said new release was sought, and so here we are, ready to find out more about the man’s new sonic offering…

As has been well documented, these are difficult times for musicians. Many of the bands we speak to here are ‘more established’, and have systems in place to ride these COVID crises out, albeit not indefinitely. How hard is it for an artist such as yourself? Most of your income must be derived from touring – how does a band cope when it’s primary source of income is suddenly taken away? “Well, I’m lucky. I run a small company. Well, I say small – it’s just me! I’m a welder and fabricator. I have to be self employed to be able to go on tour and do the things I want to, so a long time I made sacrifices – not having relationships that were going to last, not having a career to fall back on if rock n’roll goes tits up – which invariably it always does… so for me at least I’ve been able to carry on working, I’ve been able to carry on working on the album. But there’s a lot of stuff that I pay for for the band through the band – and if you take away the revenue from fifteen shows you’re a few thousand pounds down which can’t be replaced. And if you’re like me, as you say not as established as other bands, you live hand to mouth. Day to day. Gig to gig. You basically can’t do anything other than think of how you are going to change your plans. I play guitar for Jizzy Pearl (you may remember him from American rockers Love/Hate – Ed). He relies solely on his music. Luckily the government over there in the US are helping musicians out but he’s looking at crazy sums of money – tens of thousands of dollars – that he won’t be able to earn this year. Over here in the UK the government have just announced a care package yesterday for artists but I don’t really know what’s going to happen. There are a lot of bands that probably won’t come back”.

And venues, for that matter. “More importantly the venues. One hundred per cent. Some bands won’t come back, which might be a good thing (laughs), but venues we can’t live without. We’ve spent a lot of time working with venues, building up a following at those places. And if those venues don’t come back that’s a lot of work down the pan. A successful venue doesn’t just happen over night and it’s inevitable that we’re going to lose some”.

Let’s talk about the new album now. Tell us a bit about how it all came together. You all live in and around Basingstoke, so presumably you weren’t too affected by lockdowns when it came to getting together to sort the record out? “No… it’s such an incestuous story really! It all links in… A lot of the songs that were written for the first album were written years ago. It was with the same drummer I have back in the band now, Carl Donoghue. In between that time we started a band called The Black Bullets, I joined Warrior Soul and Love/Hate, Carl left The Black Bullets, I started the Hooligans and he ended up bringing his rhythm guitar player (the superbly named Lance Skybaby) to play with me. The guy that replaced me is now in my band! When I went to record the album we just re-recorded what I already had and what I’d had for years. I just wanted those old songs out. I ended up getting Dave Sanders from Falling Red to do the drums and he did a fantastic job but he lived over two hundred miles away in Carlisle. My rhythm guitar player at the time had a baby and couldn’t commit to the touring and playing or getting to recording sessions. As soon as that first album was done I started on the second one.  Everybody lived back close to one another, and before the Lockdown started we’d been jamming twice a week and working on these songs. When lockdown came I was able to go down to the studio myself – we’d already recorded most of Carl’s drums – so it hasn’t been too difficult a process to carry on with the making of the album”.

And you’re happy with the way it turned out? “It’s by far my best work. Maybe it’s because I’ve got more invested in the new songs. I’ve had a lot of shit going on in the last six months in my own life, stuff that needed exorcising let’s say… it’s not to say that I wasn’t invested in the songs on the first album but these are much more organic. I got to work with my producer Dave Draper (The Wildhearts, Professionals) much more and listen to his direction this time around. Every nook and crannie of this album has been looked at and listened to and thought about a lot more than the first album. It was like ‘Let’s get this fucking recorded and done’!”

And now of course you’re not able to get out and promote it. I see that a lot of bands who tentatively had shows booked in the UK for September and October have pushed them back to 2021. “I’ve got shows booked from the end of September onwards. We’ve just moved the Love/Hate tour to February, fifty per cent because we don’t really know what’s going to be happening in six weeks time, and fifty per cent because Jizzy probably won’t be allowed into the country. It’s not worth the risk in that respect. My shows were due to start after the Love/Hate tour. The pubs in the UK are open at the moment, and at some point in the next month the rules that surround that – people are just going to say ‘fuck it’. I can’t see that the government are going to start shutting things down again, then opening them up again… I’ve got shows booked but I won’t announce them until we see how things are going”. 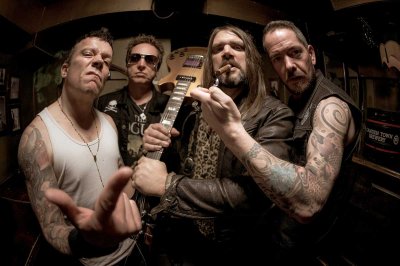 We digress for a few minutes after this, indulging in the sort of idle road tales that only full-force rock n’rollers such as Stevie and your humble interlocutor find interesting, before, professionals that we are, we steer the conversation back to the new album… “the new album… I’m looking at a lot of bands who are releasing albums at the moment… I’m not going to name names but they are the bands that seem to get the slots at the Hard Rock Hell festivals at the moment, which I can’t seem to get booked for. Maybe it’s because I’m genreless! Anyway I’ve decided to call the new album Major League Son of a Bitch. Because I’ve been trying to figure out, over the last year or so, not what makes a band, not commercially viable… but why do some bands get opportunities and some don’t? Why can some bands play three shows, or even no shows, and then get these festival slots? Everybody wants to play them, you play to more people. Why do some other bands have to work their arses off, release music that’s ten times better than the other bands, yet it’s impossible to get it listened to? I’ve been looking inwards at myself a lot, and I thought for this album I’m just going to be me, and do all the things that I want to do. Not worrying about getting it played on (radio station) Planet Rock, not worrying about Classic Rock giving me five stars (laughs)… I’m not having a go at anybody – I just thought I’ll stick to doing what I’m good at. It’s not safe rock. I don’t want to go and stand in a crowd and listen to people singing about how sad they are. There’s a band around at the minute, they have a song called Shirt Potatoes (it’s Bootyard Bandits – Ed). And Planet Rock are playing it. What are we feeding people? That’s not disrespecting the band, it’s all in jest. But I think I’ve just got to go the other way, just stick to my guns. So calling it Major League Son Of A Bitch automatically means it won’t be played. Anywhere. So I’ve gone with that. I feel so much better that I’ve vented all this stuff through the album”.

I understand what you mean. I find many of these newer hard rock bands to be a bit bland, a bit samey. “I’m a big fan of Massive Wagons, I like them because they write good songs. And they’ve been around a long time, they’ve worked the old school way. But there’s a lot of pressure on Massive Wagons now to become massive! I’m trying to figure out why we just don’t see many bands like that any more, but I think it’s probably a conversation we’ve been having for the last twenty years”.

Well, twenty five years to thirty years ago you could go to the Marquee and see good British bands most nights of the week. Usually supporting overseas acts, and most of them didn’t get anywhere, but they did at least seem like viable contenders. I don’t think you see as many of those type of bands anymore. “No. It’s strange. But the industry has changed – the rewards aren’t there. Were they ever there? (laughs). Jizzy often talks about trying to make it in LA in the mid eighties. Trying to get the million dollar contract. It didn’t happen very often but they did hand them out. And now people still think they just have to play one or two shows and someone will walk up to them and say ‘oh! there you are. I’ve found you!’ and give them a million pounds.It doesn’t happen”.

As ever, time has defeated us. I could talk about this all day, but we both have places to be – any last thoughts on the album you’d like to share with the readers of Sentinel Daily? “Strap yourselves in”…

Major League Son Of A Bitch releases on September 24th.