Steve Hackett: ‘Prog is a little bit like a film for the ear, rather than for the eye”. 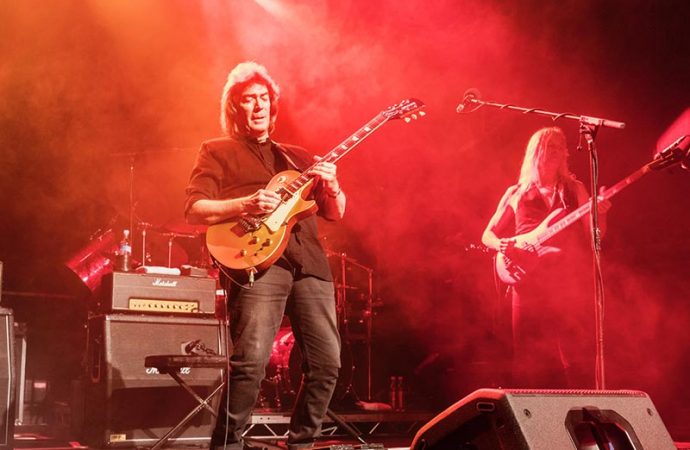 If you have even only a passing interest in progressive rock, you’ll know how important guitarist Steve Hackett is to the history and development of the genre; there are few six stringers currently still plying their trade in any form of rock music as hugely inspirational yet relatively little known beyond the cognoscenti than he.

Hackett and band will be playing the Be Prog, My Friend festival in Barcelona at the end of next month – there’ll be a full report in Sentinel Daily, obviously – and we jumped at the chance to have a chat with the man providing the soaring lead lines in such timeless prog classics as Supper’s Ready and Shadow of the Hierophant.

You’ve just got together with the band again in Portugal after a bit of a break – how did that go? “Very very well. Portugal is very nice. The festival was in a place called Gouveia, with a whole ton of performers. We’ll be doing shows throughout the (Northern) Summer now and Europe, and I’m in the middle of recording as well. I’m recording at home even though there’s building work going on!”

The next stop on that tour is Be Prog, My Friend – what sort of set can fans expect to see from you there? “Well, I have to be reminded how long I’m playing there, whether I’m doing a full show or not. It’ll really depend on that. But the shows I’ve been doing have been a mixture of solo and Genesis stuff; over recent years I’ve sometimes done entire Genesis sets, as I’ll be doing with an orchestra later this year, then sometimes it’s fifty-fifty or forty-sixty. I try and keep everybody happy! I cover all the albums I was involved with during the years 1971-77 – from Nursery Cryme to Wind & Wuthering”.

The venue in Barcelona – Poble Espanyol – is one of those places that seems unique to European summer tours – the town square show. Are you aware while you’re playing of historical nature of these sorts of venues? “Sometimes, yes. I remember doing something in Trieste in Italy which was in a town square. They can be really good, but that seems to be whether the shows are free or whether the audience has had to pay. They do tend to attract large crowds. The band tends to react very well in those larger venues. It’s music that, when it was originally written, I think we had size in mind, so those songs often work very well outdoors. We tend to find that”.

You mentioned at the start of the chat that you’re recording now – is it important to you to keep creating new art? Many artists who’ve been around as long as you seem happy these days to tour once a year with no new music at all. Is it important to you to stay relevant by the creation of new material? “I think so. Otherwise you can become a touring museum. And glorious though those old classics may be I personally think it’s important to keep developing with new stuff. The last album I did had twenty people on it from all over the world, including people from Israel and Palestine working together (Orphaned Land fans take note – he’s talking about Kobi Farhi – Ed). It was a chance to show that you can draw artists from different backgrounds, even backgrounds that are in conflict, and that they can work very well together. We’ve been working with two girls, Durga and Lorelei McBroom, who are well known for doing work with Pink Floyd, singing the Clare Torry parts from Great Gig in the Sky; they’ve done some gospel style music with is, which sounds great. We advertised the fact on social media and the response has been extraordinarily good. It’s great to honour the music of the past but at the same time I want to be working with people on new music of the calibre of these people who’ve worked with the Floyd guys”.

I’m interested in your concept of honouring the past; I was listening earlier on to the remake you’ve recently released of the GTR classic When The Heart Rules the Mind. Does the decision to redo that song come from the same sort of place? “In a way I wanted to celebrate the fact that it was – and I’m trying to think what the year was when we made it – all these years after recording it. I wanted to record it with the production values of now and the experience of now, and to take the chance of opening up my own lungs and having a go at the song (it was originally sung by Bronz frontman Max Bacon). I think it came out very well and the response has been very good. It’ll go on an album in the future”.

I think it’s a great version. “It was great to work with Steve Howe on GTR back in the day. On the re-record, I think we’ve got fewer people on it; it’s me on vocals and guitar, Steve Rothery from Marillion, and Amanda Lehmann on vocals. It’s got rather a lot of vocal tracking on it! We will be playing it live in the summer shows”.

Excellent! “It’s important to honour the music. GTR was a bit more short lived, but very well-received. As long as you honour the music with the team you have around you, I think it’s a good thing to do. And I think my band does that”.

The festival in Barcelona has gathered together a wide range of bands under the prog banner. But prog is a very loose term isn’t it? What does that word mean to you? “Funnily enough I was asked to write the foreword for a book about this recently, and I was doing some research. I found that the first use of the word ‘progressive’ in this context was used by Richard Strauss to describe the work of Edward Elgar in the early 1900s. He was talking specifically about a piece that Elgar did, a quasi-mystical thing called The Dream of Gerontius. So the term goes back at least a hundred years, and It’s been used at various points, to describe ‘programme music’ in the classical sense of the word, or to describe the free jazz that people were doing in the nineteen sixties and early nineteen seventies. Perhaps the word fusion was also used as a catch-all. But latterly it tends to mean anything from the nineteen seventies; mellotrons, mixing the three genres of rock, jazz and classical… it’s been used to describe that hybrid of styles. I think that it’s music that tells a story, and when you listen to it the best of it comes out almost as pictures. It’s a little bit like a film for the ear, rather than for the eye”.

That’s a nice way to think of it. What bands best evince that style do you think? “The Beatles, once they started linking songs… the second side of Abbey Road, most of Sgt. Pepper… Any bands at the time that were willing to work with an orchestra; I think Procul Harum did that well. Bands that again used mellotrons if they couldn’t afford an orchestra with an idea of being able to reproduce the music live – bands such as the Moody Blues, King Crimson… Yes, Genesis. Bands with a huge keyboard impact. I think that covers quite a lot of it!”

For a term that is meant to define ‘progression’ it certainly does seem to lock in synonymously with the seventies, doesn’t it? What new prog artists are there of the same calibre, if any? I’m thinking of Porcupine Tree’s Steven Wilson maybe. “Yes, but if you break it into a wider musical sense there are bands like Elbow and Muse. In Muse particularly I detect an influence or two. When a band is so broad-based that you can detect the influence of everything from Prince to Chopin, everything is possible. They are full of surprises, and I think that prog should be full of surprises. It doesn’t just have to be about difficult time signatures. Detractors might say prog is difficult – lots of punctuation, not enough statement. I’m quite happy to listen to a simple song, but I’m very interested in the idea of changing themes and atmospheres. The vignettes that the Beatles managed to draw from everyday life are an example. Whether it’s She’s Leaving Home of Eleanor Rigby, music is capable of documenting these little stories, flashpoints in people’s lives… I suspect people who have had a great deal of success with progressive music have more success using these things as a starting point than maybe the music of Emerson Lake and Palmer! They were very driven by technique and the need to show musical muscle, almost like a sportsman shaving off nanoseconds on runs; If you look at Queen, a very accessible band, their best song Bohemian Rhapsody is a totally progressive song; Interesting time signatures, antiphonal, question and answer sections which are common to rock and blues and religious music. Personally I like to listen to music from all eras, and if you can do so without prejudice, there’s no reason why any or all of this stuff can’t tun up in a song, providing the bridge passages are good enough to link them all together. That’s always the challenge”.

And surely the challenge is what makes the music – particularly Steve Hackett’s music- so fulfilling to listen to. If you’re going to Be Prog My Friend, or any of the festivals that Hackett and his band are appearing at this Summer, make sure to make a point of catching the man live. You won’t regret it.

Steve Hackett appears at Be Prog My Friend at Poble Espanyol, Barcelona on June 30th.