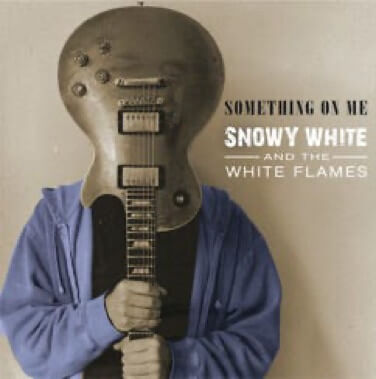 More masterfully understated blues rock from a Master of the style...

In many ways, Snowy White is the last of a line of British blues guitarists that goes right back to the roots of the British blues movement of the late fifties and early sixties. His slowhanded style certainly recalls names like Clapton and Peter Green (with whom he shared a fruitful collaborative relationship), mixed in with the prog chops of Dave Gilmour and the latin feel of Carlos Santana.

All these names flit in and out of focus over the course of Something On Me, an album as far removed from White’s tenure as Scott Gorham‘s six string partner in Thin Lizzy as it is possible to imagine. But White is very much the sum of his parts, meaning that, though you hear fifty years of the blues in his playing, he remains very much his own man as a player. Interestingly, part of this uniqueness doesn’t even stem from his guitar work, but from his careworn vocal approach, the very Englishness of which cements him as a one-of-a-kind rather than a mimic of the more obvious American tropes of the genre. You get the sense that White’s blues come from the fact that his car has just broken down on the outskirts of Dorking rather than as the result of Satanic deals going down in Mississippi. And that’s part of the overall charm.

However, when the man picks up that Les Paul, all of this is just background noise. His playing throughout Something On Me is sublime, with the solo at the end of Another Life in particular making the hairs on the back of the neck stand to attention. Less successful is the eco meltdown warning Get Responsible – White just doesn’t really have it in him to be a rabble-rousing firebrand – but even here the Latin feel used as a backdrop adds a little bit of drama and frisson to proceedings.

For the most part White is backed by Thomas White on Drums and Rowan Bassett on bass; however those who’ve followed White’s career for a while will be gratified to learn that the ‘real’ White Flames – drummer Juan van Emmerloot, bassist Walter Latupeirissa and keyboardist Max Middleton – do come together just the once on the excellent Whiteflames Chill.

Cool Down adds a little mid-seventies Frampton to the mix by way of variety, but really if you’re coming to a Snowy White album it’s the blues you’re after, and, as usual, in the shape of funky workouts like Ain’t Gonna Lean On You or the supremely trad It’s Only The Blues, there’s more than enough of that here to send both long term fans and new acolytes home happy.

Something on Me releases on October 9th.