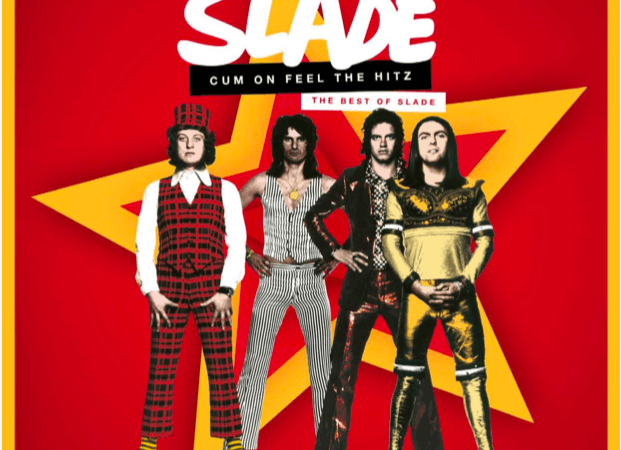 My first encounter with Slade was when a friend of mine played me the 7” single of Cum On Feel The Noize – talk about a first cut being the deepest! I was hooked. That freak of nature voice! The raunchy guitars! The driving bass and drums! Next I saw a pic… tartan, stack heels, THAT mirrored top hat, and, of course Dave Hill’s awesome outfits! I thought they looked both cool AND kooky…but I wanted more… and I got it! I went straight out and bought the Sladest album. In fact, it was Jim Lea playing a Gibson EB3 bass that caused me to go out and get one just like it when I bought my first bass. (Mine was a copy… shhh!)

A little background then.

Slade had their humble beginnings in central England’s Wolverhampton, in 1966 as The N’Betweens. By 1969 they had settled into the line-up that would soon carry them to the top of the charts and had changed their name to Ambrose Slade. Singer/guitarist and writer Noddy Holder had the voice, lead guitarist Dave Hill had both the musical chops and the balls to sell the tunes visually, and bassist and co-writer Jim Lea with drummer Don Powell supplied the kind of rhythm section which put the stomp and raunch into the tunes while keeping them danceable. Ambrose Slade’s debut album landed that same year and Beginnings, though optimistically titled, would go nowhere. It did, however, feature an early version of Born to be Wild, the Steppenwolf classic, which would re-appear two years later on their breakthrough Slade Alive! album. Following a move to Polydor Records and gaining the involvement of ex-Animals bassist and former Jimi Hendrix manager, Chas Chandler (who would also take over the band’s production duties), the name was shortened to Slade, and their next album, Play it Loud, was released in late 1970, again, to little reaction.

Things took an upwards turn in mid 1971 when, armed with a new ‘bovver boy skinhead image’ and a new single featuring their killer take on Little Richard’s 1967 hit Get Down and Get With It they entered the UK charts, reaching number sixteen and hanging around there for fourteen weeks. And Slade were on their way.

What followed over the next few years was to influence a generation of rockers and pave the way for bands as diverse as Kiss, the Ramones, the Sex Pistols, Oasis, and Twisted Sister, to name a few. Oh. And me, too…

Virtually every period in the band’s history gets a look in. The vinyl and CD formats feature different track listings, with the CD clocking in at a whopping forty three tracks while the vinyl features a more concise twenty four. We’ll review the CD version here as it features more tracks. It should be stated that the vinyl version follows a somewhat more chronological track listing than the CD, while omitting what amounts to mostly lesser known tracks.

By 1974 Slade had reached the top, with all the aforementioned titles reaching either the top or number two slots and a change was on the horizon. Wanting to spread their musical and creative wings, Slade took the next logical step – (hello Beatles, Elvis) and made a movie: Slade in Flame (tip: if you haven’t seen it, SEE IT!) and that film’s soundtrack album is represented here by two cuts: Far Far Away – a personal favourite of mine which also climbed to number two, and How Does It Feel.

In 1975 Slade relocated to the USA with hopes of repeating their Euro/UK success there, both touring and recording, which resulted in the Nobody’s Fools album. Three tracks from this period are featured here- Let’s Call It Quits, In For A Penny and the non album single Thanks For The Memory. All great, fat sounding catchy tunes. Elsewhere, somewhat out of place in the running order, the band’s last bona fide big hit Run Runaway still stands up as a classic stomper -all gang vocals, violin and simulated bagpipe noises! Of the remaining tracks on CD One their first chart hit Get Down And Get With It rightly deserves a mention and perhaps Radio Wall Of Sound, if only because it features a rare lead vocal by bassist Jimmy Lea. 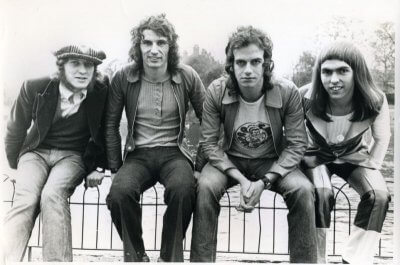 CD Two predictably features mostly late seventies and eighties output, save for a couple of oddly placed gems from their 1970 Play It Loud album which would have been more at home on CD One: Shape Of Things To Come and Know Who You Are. Although most of the tracks on disc two lean heavily on the more U.S. styled ‘big radio rock’ sound popular at the time – lots of synths, keyboards and slick production – there are still some good Slade style rockers to be had. 1982’s Ruby Red and 1977’s My Baby Left Me, But That’s All Right being good examples.

Of the remaining tracks, some are only identifiable as Slade thanks to Noddy Holder’s always recognisable voice, as the “Big American Rock Radio Sound” was in vogue in those days and many artists trod that path. It paid dividends however, as Run Runaway (CD One) was a huge hit worldwide in 1983 – so there!

Q.) How do you cap off a great collection?
A.)‘Merry Xmas Everybody’!

Released for Xmas 1973 and shooting to number one like a rocket, not only is this a tune I never tire of, but it would seem there are many who feel the same, for it’s turned out to be the gift that keeps on giving (for Noddy Holder and Jimmy Lea, at least, the tune’s composers). This song has become an evergreen, re-entering the charts every year and continuing to sell. And why not, it’s a corker!

My personal choice would be the vinyl, as it contains all the essential tracks while still adding some songs that allow you to hear how the band progressed.

Plus, Slade on vinyl? No brainer…I love it.
Get this and RAISE THE ROOF!