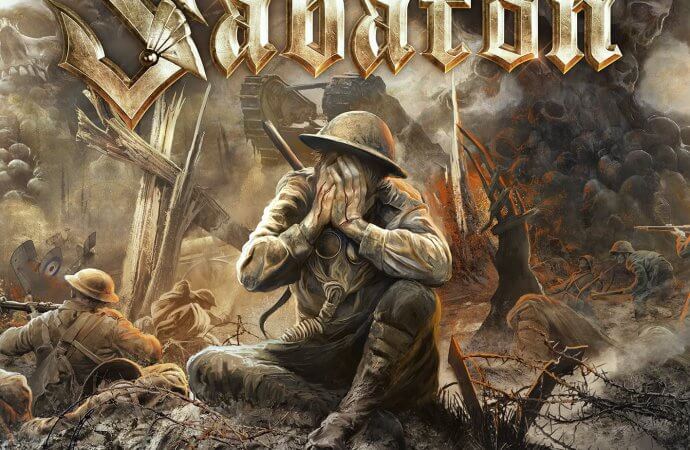 Half baked in execution if not ambition...

Sweden’s Sabaton have their act down pat now. Unfortunately this means there’s no room for movement stylistically any more, meaning that you really do know what to expect from any music they choose to release. Heavily processed, neutered guitars, perfunctory drumming, the limited vocals of Joakim Brodén swathed in synthetic choirs to beef up his sound, the cut-price Casio keyboard accompaniment… all are present and correct on new album The Great War. No song is given time to develop past it’s introductory themes meaning each one – no matter how weighty the subject matter – becomes just another exercise in verse-chorus banality. Given the monstrously heavy subject matter being dealt with here, this is an appallingly bland and trite approach to adopt.

Seven Pillars of Wisdom at least features a memorable guitar solo, and 82nd All The Way sounds like a bit more thought was put into things, but ultimately this is as good as it gets for Sabaton in 2019. The slaughterhouse of 1916’s Battle of Verdun is reduced into a three and a half minute jingle replete with a cod-Wolf Hoffmann guitar solo courtesy of a returning Throbbe Englund, whilst the terrifying war in the air is given a brief gloss over via The Red Baron that could only have been taken less seriously had the band decided to co-opt a long-retired Snoopy to help them tell the tale of Baron Manfred Von Richtofen.

Final track The War To End All Wars is anthemic at least, and tries to convey a little of the scale of the first Cataclysmic War of the twentieth century; But, given the fact that Sabaton effectively said all they needed to say on the subject of War as far back as their debut album Primo Victoria the end result leaves the listener marvelling not at the industrial scale of the bloodletting of 1914-18 but at the minuscule progress the band has made in the fifteen years since that release came out.

The best track here – a straight-up, reverential reading of In Flanders Fields, written at Ypres in 1915 by Canadian serviceman John Macrae, doesn’t even feature Sabaton. Which probably tells you all you need to know about the success of this project. I realise this ‘History Edition’ of The Great War isn’t aimed at fifty something students of First World War history, and if it does indeed spark interest in a younger generation sufficiently that they go away and conduct some independent study then maybe it will have partially succeeded as a work of heavy metal history. But that’s about the only chord of positivity I can strike for this album. A lamentable lost opportunity.

The Great War is out on July 19th.