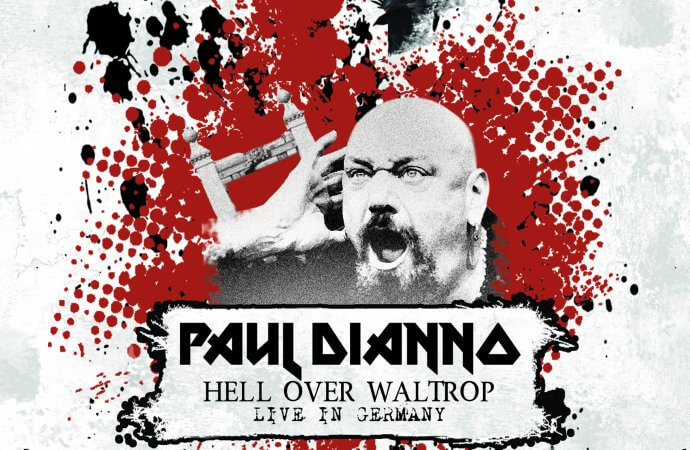 Another interesting release from the so far excellent Metalville label landed in the Sentinel Daily mailbox last week in the shape of this Paul Di’Anno artefact, Hell Over Walltrop…

Anyone who has seen Di’Anno live over the last decade or so knows that you take your ears in your hands when going to see the man in concert; uneven would be a charitable way of describing his performances, so it’s hard to see anyone but the most committed Di’Annoite shelling out for this purchase without at least a skerrick of apprehension, and, as opening track Prowler thunders out of the speakers, you’d be forgiven if you sat back smugly with an ‘I told you so’ look on your face. Our hero appears to be auditioning for a warts n’all Vince Neil tribute act in this opening track, missing cues, mangling lyrics and singing with the time-honoured dog-with-distemper aesthetics so favoured by the Mötley frontman.

But this is a passing trauma, and as the concert – captured at a small festival in Westphalia in 2006 – rolls on, you actually find yourself enjoying more and more of the performance. The playing is feisty, punchy and, in the lead work of sidemen Andy and D.D., pretty bloody impressive. When Di’Anno leaves the stage for a breather, the band’s take on Transylvania is nothing short of brilliant; even a clearly geographically-confused Di’Anno – who’s between songs are occasionally delivered in a strangled mid-Atlantic drawl or, once, thanking the audience in forlorn sounding Spanish, with songs counted in in German and French – is in relatively good voice after that early hiccup. The non-Maiden tracks fare best, though Running Free is loud and proud and Remember Tomorrow – where Paul stops trying death metal growling and actually shows his voice to it’s best effect – is a surprise highlight; Di’Anno’s own material, especially Children of Madness, is delivered with intent and no little skill, whilst the Alex Harvey cover, Faith Healer, might not be the best you’ll ever hear (Marillion alumnus Fish will always be the man for this song), but still stands out as a welcome mid-set dose of theatrical hard rock amongst the more metallic fayre.

Surprisingly enjoyable then, and well worth a listen even if you aren’t just one of those committed Di’Annoites.