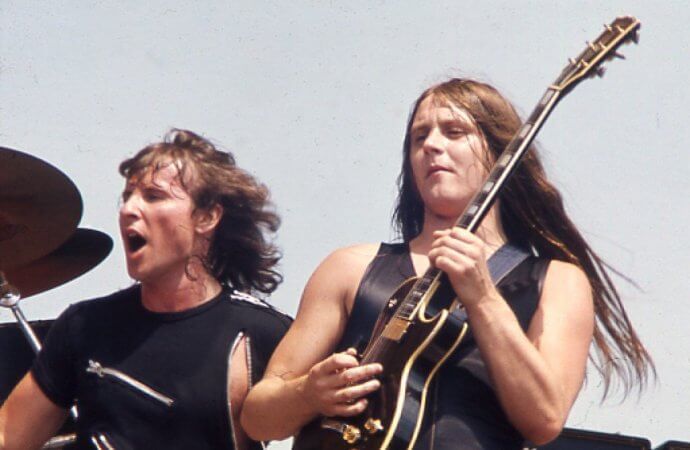 Welsh Guitarist Chapman was one of the best of his era...

Though unfairly derided by his detractors as a ‘substitiute’ guitarist – he followed two greats into established roles early in his career, replacing Gary Moore in Skid Row in 1971 and Michael Schenker in UFO in 1978, Paul ‘Tonka’ Chapman was in fact a fine guitarist in his own right, establishing himself as a stylish lead player on albums such as Lone Star‘s Firing on All Six and UFO’s No Place To Run (1980).

Chapman had actually already been enlisted as a second guitarist by English rockers UFO in 1974, before leaving to form Lone Star with whom he recorded two albums of fiery British pomp rock. In 1977 he subbed for Schenker on a US tour for UFO in support of Rush, and was the obvious choice as permanent replacement for the wayward German when the inevitable split happened permanently. Chapman’s work on No Place To Run, The Wild, The Willing and the Innocent (1981), Mechanix (1982) and Making Contact (1983), whilst perhaps lacking in Schenker’s near-mystical flair for melody surrendered nothing in technique and sheer oomph!, whilst as a personality – he earned the soubriquet ‘Tonka’ for his on road invincibility – he was infinitely better suited to the daily grind of coping with band mates Phil Mogg and Pete Way‘s ‘specialist’ sense of humour.

A divisive name amongst UFO fans to this day, Chapman added stability to the band when they needed it most, but he certainly played his part on each of the albums he featured on, filling in for an absent Way on bass for Making Contact and adding high quality solos wherever required. His work on the outro of Profession of Violence is particularly stellar.

After the inevitable collapse of UFO occurred, on the road in Greece on the Making Contact European Tour, Chapman teamed up with Way again in Waysted (subbing this time for the much less well-known Ronnie Kayfield) for two excellent albums in The Good, The Bad and The Waysted (1985) and 1986’S Save Your Prayers, which briefly dented the American charts, but that was largely it for Chapman as far as the spotlight was concerned.

He never again appeared in the merry-go-round of resurrected UFO lineups, retreating to his home in Melbourne, Florida, where he appeared with a variety of short lived projects. At the time of his death he taught music one-on-one from his home studio in Melbourne. He died at home yesterday, June 9th 2020 on his sixty sixth birthday.

On a personal note, Chapman was the guitarist in UFO when I first got into the band, and for that reason he remains my favopourite guitarist to have played with the band. He will be sorely missed by his legion of fans the world over and joins fellow UFO alumnus Paul Raymond at the great gig in the sky. RIP.