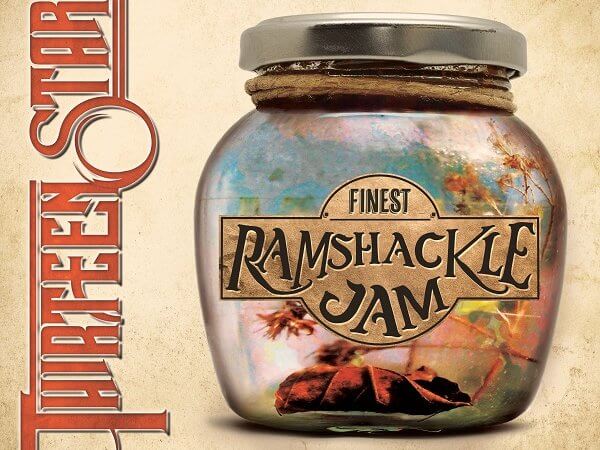 Finest Ramshackle Jam – the album in question – was recorded at Doncaster’s Axis Studios (Terrorvision, Massive Wagons, Black Spiders) and engineered by Matt Elliss, with the album co-produced by Elliss and Thirteen Stars’ own Hoss Thompson. The album was mastered by Geoff Pesche (Page & Plant, Therapy, The Divine Comedy) at the world-famous Abbey Road Studios  facility.

“The album as a whole was in some ways a reaction to The White Raven (the band’s previous studio album)”, explains Thompson. “Whilst we like that record, we felt that it lacked some variety and we wanted to create a more esoteric album. One that encapsulated all the different inspirations we have and that shows the variety of songwriting that we create. Our favourite bands wrote and recorded over a vast array of genres and styles and we felt that made the albums more interesting to listen to. The album title came from a friend of ours who once described our rehearsals as a Ramshackle jam.”

Tracklisting:
I’m Ready
Running So Long
Sweet Lies
Give It Good
Sleeping
Sorcery
Be There In The Morning
I’d Do Anything
Mint Jelly
Rebel
Steel Horse
Keep Calm and Carry On
Razor’s Edge
Break It Down Slowly
Only A Soldier

Our very own classic rock guru Gavin Strickmann has been having a listen to the album recently, and has this to say about Thirteen Stars: “Although they namedrop acts like Blackberry Smoke and the Black Crowes (and they probably love Black Stone Cherry too), there’s a a definite British edge to Thirteen Stars, a raw-throated truth that goes back to some of the great blues-based Britrock names of the seventies. Have a listen to opening track Are You Ready for proof: an all-guns blazing investigation into the reason names like Gallagher, UFO, Mott and Bad Company are so revered to this day. Sure, they nod to those New World heroes too (especially on the Petty-drenched Running So Long), but this is a record so British it’d have ‘Brighton Rock’ running through it if you cut it in half! And there’s nothing wrong with that! Great stuff!”