On the Road With Claim the Throne 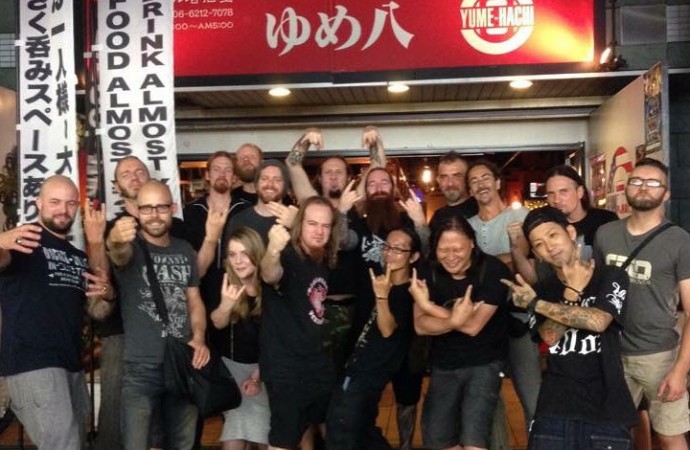 "We played South Korea a couple of years ago and found a dog cafe". Claim the Throne's Dysie talks to Scott Adams about the joys of touring...

Greetings Mr Dyson, and welcome back to Sentinel Daily… So, are you looking forward to the East Coast Easter Carvery? “You bet your delicious booty we are. Last year was a quiet year for us show wise, due to writing and recording our next full length album, so it’s time to get out and about again and strut our stuff. The new album won’t be out before this tour, but we do have some new meaty slabs to carve out on stage! So it will be the first time our east coast fans and friends can have a listen to some of the new material before it is officially released”.

Talking of carveries, the last piece we ran on you featured a picture of you about to devour a chiko roll; How important is it to maintain a healthy diet on the road? “Chiko rolls have all the main food groups apart from dairy, so I get around that by sprinkling cheese on them. When I am not eating them, I’m usually stuffing my face full of pie followed by a picnic for dessert, all washed down with the cheapest premixes can I can find. I only find water good for mornings & occasional washing. Put this on repeat for a few days & your tour botty should kick in in no time”.

What would your ideal rider be for each member of the band? “Most importantly and if it was possible, the liquid section of the rider would consist of one carton of fine local beer for the boys, one carton of refreshing cider for Jesse (Millea, keyboards) and me (yes I’m a girl), one bottle of white wine also for me, one bottle of Jagermeister mostly for me to kick things off afterwards, Red Bulls, some mixers, plenty of ice and some waters for the morning. The only food I need is lollies. Preferably Jubes’.

Seems eminently reasonable. But what, in reality, do you get? We hear some horror stories about stingy promoters and venues? Any truth in them? “(laughs) if you are travelling around, it can be a lottery. In our home town of Perth we pull decent crowds, so the venues do look after us & we will get at least a carton of beers & ciders & a bottle of wine, plus waters. Victory! But we have been to other places where we haven’t even received a water on the rider. Not so glorious! Gotta pay for it all. But’s that when we will sniff out a cheap bottle shop nearby & stock up on our own cheap n nasty faves & make our own rider. Although a decent rider would be nice, personally it’s not a deal breaker for me. I am just usually happy playing in a far out place far away from home. So if I need to pay for a few bevvies, so be it. Although we do quite often have fans buy them for us, which is always a treat! Thanks to you lot for those!”

What’s the best thing about touring? “For me, hanging out with awesome friends, playing music we love, to new people and in new places. Seeing new things, eating new things, making new fans and friends and drinking our riders when we get them! For me and Jim (Parker, Bass) in particular it’s a treat finding new dogs to pat. We played South Korea a couple of years ago and found a dog cafe. Amazing, so many dogs of different shapes, sizes, ages, temperaments, all together in one room. We were there for hours. A definite touring highlight”.

That wasn’t an answer I was expecting. A dog cafe. Marvellous! And the worst? What is the downside to touring? “Nothing, apart from tour botty”.

How do audiences differ from place to place in Australia? “I don’t think there is too much difference in Australian audiences really. Especially in the city regions. I have found the country towns we have been to, especially on off nights like a Wednesday or Thursday, and crowds being on the smaller side, seem to get more buck wild and crazy than city shows. They also tend to spend more on merch and buy us drinks. Very nice of them”.

And what about overseas? Any marked similarities or differences? “The Asian crowds are definitely interesting. They go pretty crazy while you play and when you stop, they clap for a second and then stop. Then there is this kinda awkward silence, it could be a full room of 200 – 300 people, but it is dead quiet. No drunk Aussie yobbo heckling or screaming. Just silence. But they are the most respectful people and are very grateful you are playing for them, even if they can’t understand anything you are saying. And they are mad for photos, absolutely mad. We played a show in Penang a couple of years ago to around eighty people in this tiny venue and I am ninety nine per cent sure everyone in that crowd got a photo with us afterwards. I’d be happy to tour Asia non-stop”.

What piece of kit is essential to your piece of mind whilst on tour? “As much as I hate saying it, wifi. Although I may be on tour, I often still have work to take care of, so need the good wifi. Other than that, my toothbrush. After a long night, my morning mouth is like a sewer”.

You promote shows as well as playing them. Seeing the coin from both sides, what is one thing promoters could do to make life easier for bands, and how might bands ease a promoter’s life occasionally? “Well as I am a professional and amazing promoter, there is nothing more I could do to make a band’s life easier. But as for bands, well, if you could all read your emails and then all listen when I talk, then that would probably help a lot!”

You heard the man!

Claim the Throne and Darker Half take part in the East Coast Carvery on the following dates: