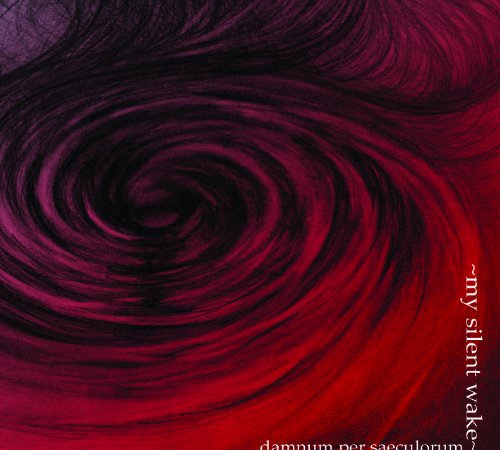 Breathtaking in every respect...

A baleful Sentinel rests atop the Tor at Glastonbury, surveying the bleak dampness of the Somerset Levels as they stretch to the sea, weather-scoured and exposed, as they have done for centuries. Beneath the gaze communities rise and fall, illuminated by the fire of pyres both celebratory and mournful, the still air occasionally catching the melody of songs both sacred and deliriously profane. Humanity. All of it is here, within the Sentinel’s wordless memory. The struggle, the joy, the woe. The apogee. The nadir. Alpha, omega, world without end.

British outfit My Silent Wake are that Sentinel on their new album Damnum Per Saeculorum. A work of truly rare ambition, the album takes in worlds as apparently disparate as early medieval worship music and late twentieth century black metal, forging in little over an hour a mesmerising microcosm of the human condition via the gift of music that will by turns bemuse, enchant and delight any listener who cares to take the time to immerse themselves in it’s untold delights.

The press release that accompanies this release will try and fob you off with a glib ‘ambient’ tag; and whilst there are soundscapes that might well fit that superficial bill scattered across the album’s fifteen tracks, this is so much more than the simple muted tones and ‘world’ sounds usually associated with such a term. My Silent Wake’s ambience is not one that sits in the background, happy to accompany and compliment; rather it is an all encompassing otherworld of sound that demands centre stage and then fills that space with it’s myriad deployment of symbol and sigil. And yet, otherworldly though it seems, the sound takes as it’s foundation the rich legacy of human music making in this world over the last thousand years. Short instrumental Bacchanal could well have been written at the same time as the famed Red Book of Montserrat, the collection of devotional songs written in Catalunya in the fourteenth century; Two songs later All Our Fears Are Over sounds like a hellishly conceived collaboration between Bauhaus and Massive Attack; this juxtaposition of eras and styles never jars, and never sounds like clumsy manipulation. As noted, it merely seems to serve to tell a tale centuries in the making.

The album’s central piece, Of Loss And Regret, melds a gentle folk guitar refrain with spoken word accompaniment before a choral interlude heralds a stark, unsettling piece that somehow manages to weave together Jethro Tull‘s Broadsword with the earthbound mysticism of Wardruna. The song’s crescendo, which somehow swells and builds yet never quite becomes fully realised is one of the most affecting pieces of music you’ll hear all year. That this track is followed by some dream pop in the shape of Fall In The Sea – a song Scott Walker would surely have embraced in his ‘avant’ years – sums up the album perfectly.

To Feel The Caress of Long Dead Lovers adds delicate female lead vocals to the mix – eventuating in a delicious melange of Martha Wainwright and Dead Can Dance – but I think I’ll stop there with the descriptive overkill. I don’t want to reduce an album of this vastness to a mundane list of other artists you may be reminded of whilst listening. At it’s heart there’s a uniqueness to this album that remains at all times more important than the sum of the parts that constitute it’s body, a uniqueness that means you’ll want to keep returning to it over and over again.