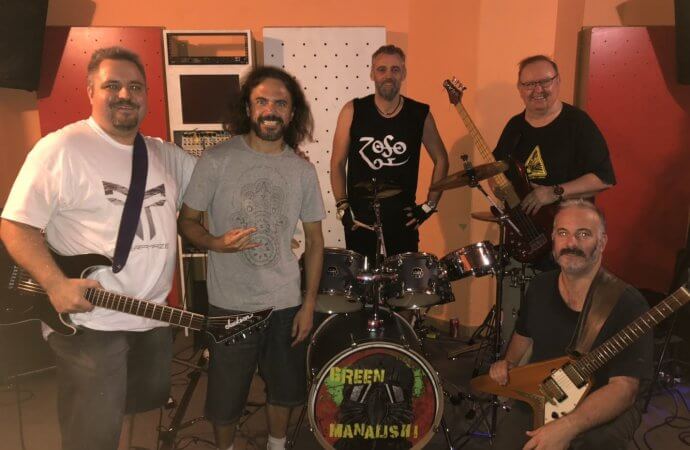 Englishman Simon Hill is one of Australia’s leading football commentators, having called games all over the World at the Olympics and World Cup as well as the AFC Asian Championship and the Hyundai A-League… it would be easy just to spend our time talking football as we ease into our conversation, but I’m in charge so we limit he round-ball chat to how great the Queens Park Rangers squad of the mid seventies was and get down to the matter in hand – heavy metal. Any one who listens to Hill’s broadcasts regularly won’t have failed to detect the odd pro-metal quip, so we decided that Simon would be the ideal candidate to kick off our My Life With Heavy Metal series…

So what are your early memories of metal? What got you into the music in the first place? “It’s a strange thing really… up until about the age of nine or ten I wasn’t really that much into music. My mum was and still is occasionally a piano teacher. She was very much into classical music, and my sister, who is sadly no longer with us was a fan of disco music. Earth Wind and Fire were a particular favourite. But mostly music passed me by until I had one of those ‘lightbulb moments’when I was at a School friend’s house – Russell Reason, his name was! Anyway we were doing stuff and he said that somebody had bought him a record and we wanted to know what I thought of it. He put it on and it was Burn by Deep Purple. To be honest, from that moment it was like the scales had dropped from my eyes. Unbelievable! I’d never heard anything like it in my life. From that moment on I was a a fan of Deep Purple and in particular of drummer Ian Paice. I play drums now, have done for years and years, and that was the start of it really. I went home and got my mums knitting needles out, turned a couple of wastepaper baskets upside down and tried to replicate what I’d just heard… From that moment on it was literally like someone had flicked a switch, to paraphrase AC/DC… I was just hooked!

Now, you’ve answered my second and third questions there! “Sorry!”.

But we’ll persevere as one of them is a pet theory of mine. I’m interested that you say you went home and tried to get a drum kit together as soon as you’d become a convert. I think metal fans – perhaps more than fans of any kind of music – really do try and become musicians very often once they’ve been bitten. Even if they weren’t in any way instrumentally active already; Because it’s such an inspiring form of music isn’t it? “I think that’s a good theory. I can’t quite remember the timescale, it’s a long time ago now, but I remember saying quite quickly to my mum and dad ‘I want a drum kit’. My mum wasn’t keen – she wanted me to learn the piano, which my sister was doing but I’d never had the slightest bit of interest. I wish I had have done now, to be honest… but I knew I wanted to become a drummer. So I asked them and they weren’t that keen (a) for the noise (laughs) and (b) because they felt it was probably a fad and would sit there and gather dust after a week or two. Eventually I must have gone on about it for so long that they got me a second hand Premier Kit, five or six piece I think. It cost forty pounds. Within a few weeks after that I was in a band with Russell. We couldn’t play anything  but we stayed together for many years, only splitting when we all went off to University; Many years later we all got back in touch through Facebook and we’ve actually got together and re-recorded some of the tracks we recorded originally years ago! It’s been really nice, a lifelong connection”.

Of course you can make a recording that sound’s like Def Leppard’s Hysteria in your bedroom now – compared to those far off days in the eighties when recording on a small budget didn’t get you very far it’s almost like science fiction today. “It is. When we got back together in 2016 it was the thirtieth anniversary of our first demo tape. So we went back and re-recorded those. But last year I went back to England we decided to record three Hawkwind tracks – we’re all big Hawkwind fans. I’ve seen them seven or eight times, I’m still obsessed with them, so we did Motorway City (Levitation, 1980), Angels of Death and Rocky Paths ( both from 1981’s Sonic Attack), and afterwards I had a listen and thought, well, they’re OK… But now they’ve been mixed, remixed and mixed again and I’m thinking they sound better than the originals (more laughter)! And that’s all due to technology! I’ve even made my singing debut on these! Hopefully we’ll get them up on Spotify very soon. But yes, modern technology, is amazing. We never had any of that in the old days!”

So we’ve established that you quickly became a dedicated junior headbanger – what albums from those early days are you still listening to, and which others, if any, cause you to wonder what you were thinking at the time? “To be honest, Scott, I’m very much a man of my time. I grew up with The New Wave of British Heavy Metal, and I’m sort of stuck in that time period. I still love all those albums – I’ll reel a few off for you; Iron Maiden – I love Iron Maiden, Piece of Mind is an absolutely brilliant album as well, Motörhead‘s No Sleep ‘Til Hammersmith – I love the live feel and the energy that the toxic trio of Lemmy, Fast Eddie Clarke and Philthy Animal Taylor put together. I know they had subsequent lineups but for me, again, I’m stuck in time with those three. I just thought they were utterly sensational. Black Sabbath‘s Sabbath Bloody Sabbath, Gillan – Glory Road. I’m a big fan of Gillan. Saxon‘s Wheels of Steel, and on the more obscure side Tygers of Pan Tang‘s Wild Cat, Magnum‘s Marauder… you can tell which genre I belong to! And I know there’s still debate raging about whether AC/DC are heavy metal or classic rock but they are the band who I first bought a record by in 1977 or 1978. All these are bands that I’ve just loved, and listened to over and over again. Alongside Deep Purple and Hawkwind of course. And although there is some modern metal that I like, I find it a little bit formulaic. Too many bands are just cheap rip offs of bands like Slipknot and Linkin Park, although I do actually like both those bands as well”.

Trad metal is making a big comeback, especially in the US and Europe, with many young bands (and some not-so-young) recording and releasing albums that sound like they were written in 1982. You’d love a band called Tyrant from the US who were around at the time but are back now that sound like a cross between Cloven Hoof (who also have a new album out at the moment) and Manowar. “That’s great, I’ll give it a listen. What I like most about bands like Black Sabbath and Iron Maiden was that their last albums, 13 and The Book Of Souls, both sound like they were written back in the day. Nothing updated for new audiences. I was unsure about both when I bought them but after three or four listens I loved them!”

You’ve given us a few of your favourite all-time albums – now I’d like you to nominate the members of your all-time metal supergroup. “Oh wow!” Obviously Ian Paice. “Well, yes and no… I’d quite like three drummers if that’s possible! Obviously Paice because he’s the first, but also John Bonham of Led Zeppelin. And then in terms of sheer ability, Neil Peart of Rush is just beyond compare. As I drummer I can follow what most drummers are doing, even in metal, but Neil Peart’s compositions are just extraordinary. Even after thirty years of listening to tracks like Subdivisions and Tom Sawyer I still can’t play them. He is a freak! So if pushed for just one I’d have to say Neil Peart as the drummer. Guitarists… this is tough mate! Ritchie Blackmore and Jimmy Page. Bassist… I’ll stick with Led Zeppelin, I think. As a bassist/keyboard player I think John Paul Jones is very underrated. He’s just extraordinary. And a vocalist? I love Bon Scott, I love Robert Plant, I love Geddy Lee all for different reasons… who do I go for? I’ll go with Bon Scott. Or Bruce Dickinson! Those people probably won’t go together very well as far as metal super groups go!”

Well, apart from Neal Peart they could at least have a good drink-up together! Now, one of the by-products of the lockdown has been a lot of time to get up into the loft to find things to read from one’s old magazines from years back. I’ve been going through some old copies of (British football magazine) Shoot! from the seventies and eighties, especially the player q&a pieces they used to run – ‘favourite food’ – Scampi and Chips et cetera. None of these betrayed a single player who was willing to say he liked heavy metal. In fact until I read Pete Davies‘ excellent book about the 1990 World Cup in Italy, where he outs England defender Terry Butcher as a rabid Iron Maiden fan, I wasn’t aware of any footballers being metal fans. What about the current crop of A-League players? Many metal fans there? “I can give you a few names… Gertjan Verbeek, who has just stepped down as manager of Adelaide United – massive Led Zeppelin fan. Clint Bolton, who used to play for Sydney FC and Melbourne Heart, is the biggest Metalhead I’ve ever met, probably more into than me! John Didulica, the head of Professional Footballers Australia, is massively into Iron Maiden and various other metal bands, and Spencer Prior, who used to play for Manchester City and Leicester City – he’s a massive fan of Slipknot. There aren’t many! Another on off the top of my head is current Socceroo Jackson Irvine, who currently plays for Hull City in the EFL”.

Anything else you’d like to tell our readers? “Obviously I love what I do very much, and I wouldn’t have changed that for the world, but I think that if that hadn’t have worked out I would have liked to have become a professional musician. We did come close, with record label interest back in the day. The label was called Plankton Records, which shows you how small it was! But I still play today with a band called Green Manalishi (see pic above) – we do covers of tracks by Sabbath, Iron Maiden, Judas Priest, Motörhead… I’m still dreaming mate! If I could play the Hammersmith Odeon just once that would be great!”