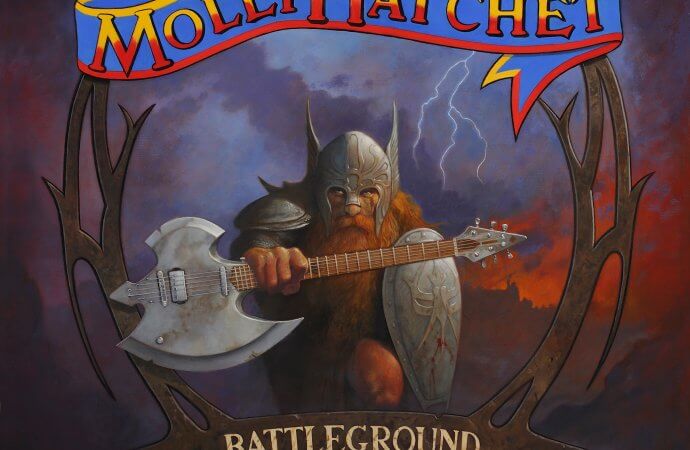 New double live exposition of the Southern Rock arts from these Floridian masters...

If, like me, you grew up at a time when Southern rock was a revered art form, you’ll be equal parts perplexed and nervous about the appearance of a new live album from the venerable and venerated Molly Hatchet. In their heyday, around the time of 1979’s Flirtin’ With Disaster until 1983’s No Guts… No Glory, Hatchet were second only to the mighty Lynyrd Skynyrd in the eyes of young British (or at least Welsh, I wasn’t very well travelled in those days so I can’t comment on behalf of the rest of the country) headbangers, their triple axe attack driving wild eyed air guitarists like me into frenzy with all out axetravaganzas like Boogie No More and Fall of the Peacemakers.

They went a bit wimpy after that, like most Southern rock bands, and drifted into an obscure life of State Fairs and occasional revivals of interest. Skynyrd retained their cache, but Hatchet felt their star dwindle and fall to almost nothing.

So here we are in 2019 with a new Hatchet live elpee, featuring a whopping nineteen tracks of Floridian guitar-fuelled mayhem. And here’s the first cause for worry. As noted, Molly Hatchet at their apogee featured not one, not two, but three guitar heroes in the shape of – at their peak – Dave Hlubek, Steve Holland and Duane Roland. Today the band features a lone six stringer – Bobby Ingram, of whom more later – and, to my addled mind at least, it seems inconceivable that three can become one with any sort of credibility.

New vocalist Jimmy Elkins fronts the band in an assured style that’ll have long term fans welcome his gruff croon like a long lost rebel son; his take on the lightly shortened version featured here of Edge of Sundown – which became something of a signature song for the band’s most plaudited singer, Danny Joe Brown – is respectful to the old Gods of the genre yet still shows that the singer is just as important as the song. He acquits himself with aplomb, and, fans will be pleased that songs are delivered just the way they’ll remember them, but with a fresh vitality.

Which brings us to the guitars. Bobby Ingram is nowhere hear being an original member of Molly Hatchet, yet it is he who has been the torch bearer for the band throughout its darkest days, keeping the name of Molly Hatchet alive by hook or by crook. For this he deserves respect and thanks, but – and it’s a bloody great three-pronged but – his decision to deviate from the time-honoured multi-axe format so beloved of southern rock fans the World over, just does the songs no justice in the opinion of this reviewer. The set piece classics of which Hatchet fans were so enamoured just don’t carry the instrumental heft of yore, leaving the recordings here sounding slightly lacking in this vital performance area. This is no slight on the musicians assembled to do the job – but rather on the absence of at least one but probably two vital cogs in the machine. Ingram plays well. Make no mistake – his solo on Devil’s Canyon is superb, as is his slide work on Justice – but he can’t do it all on his own.

That said, on the simpler, rollicking assault of tracks like American Pride or One Man’s Pleasure there can be no complaints – this is tight, rocking barrelhouse boogie straight out of the top drawer, with keyboardist John Galvin in particular giving Ingram good support. And the rhythm section of drummer Shawn Beamer and bassist Tim Lindsey prop up the bottom end neatly, with Lindsey playing some fine four string when Ingram heads off into solo country.

So there you have. Purists might deny that this is Molly Hatchet at all, but, if you’re simply glad that the band’s legacy is being kept alive then there are probably enough good moment on Battleground to get the album a pass. Me? I’m somewhere in the middle, but it can’t be denied that there are some genuinely pleasing moments on this album.

Battleground is out now.