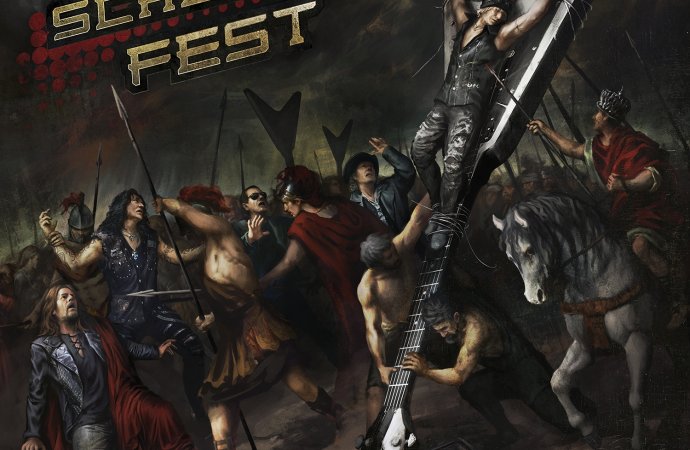 Michael has a new sonic Testament for us all to enjoy...

Whilst the ‘controversial’ cover housing the latest MSF album, portraying the Passion of St Michael Schenker in histrionic detail, might suggest, in tandem with the Biblically-inferring title, of an album concerned chiefly with matters metaphysical, the sonic evidence laid before the listener’s ears is decidedly more visceral, not to say earthbound…

Plodding boogie rock like Silent Again is anything but divine, after all; however there are moments, just as there were on last year’s debut by this collective, where Schenker’s otherworldly – I stop short of declaring it Godlike – talent does reveal itself, even to rude and unworthy accolytes like me.

Ensemble pieces like opening track Rock Steady work well, if only because nobody sings for long enough to get on the nerves; for surely only the most uncritical listener won’t have his or her favourites amongst the four vocalists who return to peddle their wares on Revelation. As a long term Schenkerite, I’ll always have a predilection for Gary Barden myself, even if technically he’s leagues below the other three; however it has to be said that Graham Bonnet routinely steals all the vocal accolades throughout the record, his foghorn power belying a throat that’s been on the planet for over seventy summers… Robin McAuley, custodian of the ‘hair metal years’, sounds positively tepid by comparison, whilst Doogie White bellows and roars like the club-level Biff Byford tribute act he seems to have become; Bonnet gives a masterclass in hard rock ham-it-up histrionics on the excellent The Beast in The Shadows, augmented by some splendid soloing by Schenker (who, it has to be said, pulls out some quite marvellous playing throughout), but, if this really is a time-heals-all-the-wounds meeting of the vocal great and good, I have a question – Where is Derek St. Holmes when we need him?

The classy AOR of Behind The Smile is a superb song hamstrung by a disappointing vocal, though once again the solo is just what the doctor ordered, whilst Crazy Daze, despite the lame title, is actually a nice piece of stately hard rock which shows Barden in his best light, an opportunity to shine that’s taken with both hands by the vocalist. Following track Lead You Astray, by comparison, is another boogie wasteland that does nobody any favours.

Bewilderingly – was four vocalists and all their attendant baggage not enough? – Ronnie Romero does his best Tommy Handley impression on We Are The Voice, a throwaway rocker that the other four clearly didn’t fancy when it was offered to them, but normal service is resumed on the superb Headed For The Sun, which really does spark memories of Michael at his early-to-mid-eighties best. The singer? Gary Barden. I’ll make no further comment…

The album ends on a high, with the high-speed instrumental thrills of Ascension reminding everyone present who really is running this show; it’s merely underlining what we already knew, of course, because Michael Schenker really sounds in something approaching career-best form solo wise all the way through Revelation. As noted before, you’ll take or leave the other tracks as taste dictates; whether that’s enough to recommend this as a must-have album I have my doubts, but there’s certainly enough here to warrant a little more than a cursory inspection.

Revelation is out through Nuclear Blast on September 20th.