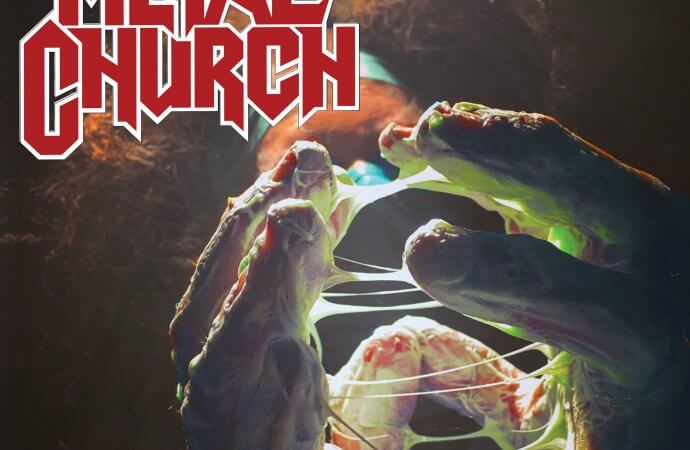 Comments guitarist Vanderhoof: “This album not only commemorates the reunion between Mike (Howe, vocals) and the band, but it also pays tribute to some of the more popular songs of that era. It’s really cool to see so many old fans and new fans of all ages enjoying these classics as we perform them live, so it only made sense to release this”.

Howe adds: “It’s an honour to be back and it makes me very happy to see that almost three decades later, fans are still enjoying these songs!”

This unique collector’s item comes as an exclusive LP in gatefold and as a CD jewelcase.

Born out of the West Coast metal scene of the eighties, Metal Church quickly became one of the standout talents of the genre. After signing a deal with Elektra Records, they released two critically acclaimed albums, their self-titled release Metal Church and The Dark. With the heavy metal scene starting to rise in the U.S., Metal Church set out on a very successful tour with label mates Metallica. They tackled political and social issues of the day with the releases of Blessing In Disguise and The Human Factor. At a time when heavy metal bands moved from the underground and became part of the hair band/pop fad, Metal Church stayed true to their roots.

In March of 2016 Metal Church released their eleventh studio album XI that reached number fifty seven on the Billboard Top 200 and also landed on several other charts around the globe. Metal Church’s previous album Damned If You Do was the follow up to XI and landed on numerous charts around the globe in 2018. The album has been described as a cross between the band’s iconic Blessing In Disguise and The Human Factor albums.