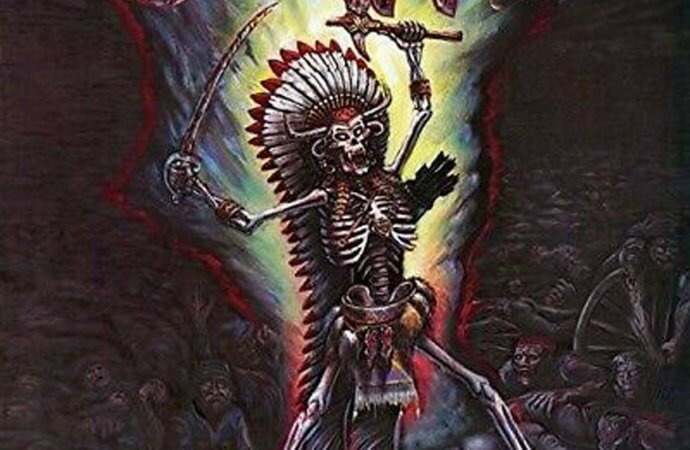 American thrashers get the reissue treatment...

Boston-based bangers Meliah Rage really should have been bigger; Emerging just as the initial phase of thrash hysteria was coming to an end, even being on a major label (Epic) couldn’t save the band from having a faint air of the also-ran about them, even as their 1988 full-length debut was stoving heads in around the World.

Listening back to the re-activated Kill To Survive now – on good quality headphones at high, high volume – it’s hard to see how Meliah Rage failed, as their muscular brand of classic metal-infused thrash appears to have little or no weakness to it to modernly-attuned ears. Sure, their closest musical relatives Metal Church were at the height of their own powers (and soon to be on the same label to boot, unfortunately for da ‘Rage), but in Jim Khoury and Anthony Nichols the band had a superior twin axe attack (best evident here on the band’s eponymously-titled instrumental anthem, where drummer Stuart Downie also shows off his impressively hard-hitting style), and the whole band knew how to keep things tight, taut and damaging on ear-stinging tracks like opener Beginning of the End or the unforgiving pummel of Deadly Existence. However, with thrash now big business, even albums as ‘underground’ as Kill To Survive needed a track to get them on the radio and MTV, and it’s in this area that you can just about detect why the band in the end were deemed a failure.

Y’see, there just aren’t enough ear-snagging, gang-vocalled choruses on Kill To Survive for it to have bothered the big boys; Enter The Darkness comes closest, with Jesse Johnson‘s bass driving the song forward with some Butleresque four string agility, but the chorus refrain just falls short, evidencing vocalist Mike Munro‘s preference for less easy-on-the-ear growling and spitting as opposed to trad metal warbling. It’s a very good song, but the commercial stakes were insanely high for bands of this ilk in 1988, and there’s the rub. The band were clearly happier on the thrashtastic Impaling Doom, which kept their band of fans happier than the record company’s band of accountants. Sad but true.

Label Metal on Metal are re-releasing a whole slew of Meliah Rage classics this month, but to my ears at least the band were never as good as they were on this debut again, especially as the album has now been reunited with it’s once-missing title track (deemed too unsettling by Epic for inclusion on the album’s original release). Give ’em a spin and tell me I’m wrong…

Kill To Survive is out now.